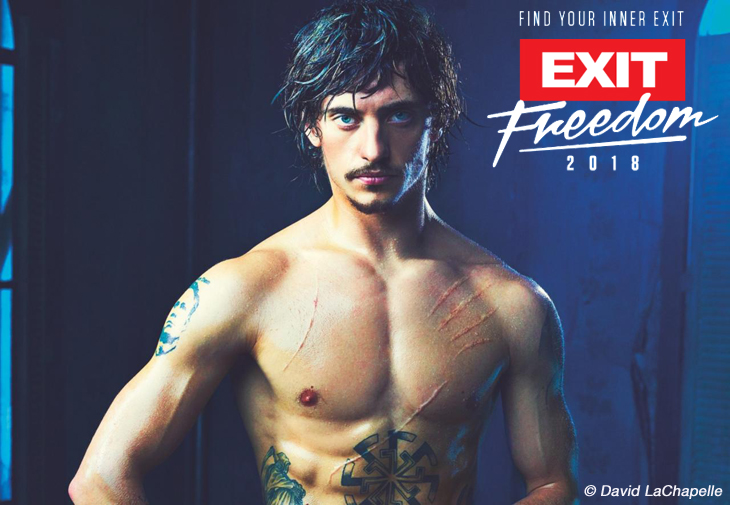 The countdown to EXIT festival, twice a winner of the “Best Major European Festival” award, is on, with over 1000 music stars set to perform at more than 30 festival stages from 12 to 15 July at collossal and unique Petrovaradin Fortress (biggest of its kind in Europe) in Novi Sad, Serbia.

One of the greatest ballet stars of our time – Sergei Polunin will perform on the Main Stage for the grand opening ceremony of 18th festival edition. His unique EXIT performance, inspired by the theme of this year’s festival, will be one of those steps into the non-classical scenic expression:
„Freedom is what we should all be heading towards. Feeling of freedom is the essence for me and taking part in Exit is about being free“, said Polunin.

Famous ballet dancer will present his fantastic talents in the very final of the EXIT Freedom ceremony directed by the young director from Novi Sad, Sonja Petrović where he will be joined by over 40 performers, as well as the Almazian Symphony, an attractive orchestra made up of 25 women and Khachatur Almazian, Georgian violin virtuoso, performing classical music in a crossover style!

His performance will take place on Thursday, 12th July on Main Stage, after the the concerts of alt-rock and art-pop divas LP and Fever Ray. After the ceremony comes the traditional fireworks, followed by the performance of the currently most popular hip-hop stars in the world, the American band Migos! This exclusive performance will be available in every corner of the globe, broadcast directly on Exit’s Facebook page.

Celebrated as a place where hedonism meets activism, year after year, EXIT showcases the best of techno, house, drum and bass, dubstep, hardcore, metal, punk, hip-hop, and more. Such diverse program is possible due to more than 40 stages and festival zones that each year spread across colossal moats throughout the fortress, hosting thousands of diverse artists!

Four-day EXIT tickets (July 12 to 15) are on sale via exitfest.org, until Monday, July 9th, after which the tickets will be available only at the festival.

About EXIT
Started as a youth freedom movement in 2000 that brought down the oppressive regime of Slobodan Milosevic, EXIT has since grew into one of the leading festivals in the world with previous bookings that include Red Hot Chili Peppers, Madonna, Depeche Mode, Robbie Williams, Guns’n’Roses, Arctic Monkeys, The Prodigy and Motorhead to name but a few. As the only contemporary music festival that grew from the social activism, EXIT will mark the 50 years since the original 1967’s Summer of Love and remind its fans to peace movement of the 60’s, conveying the messages which in today’s world are needed more than ever.