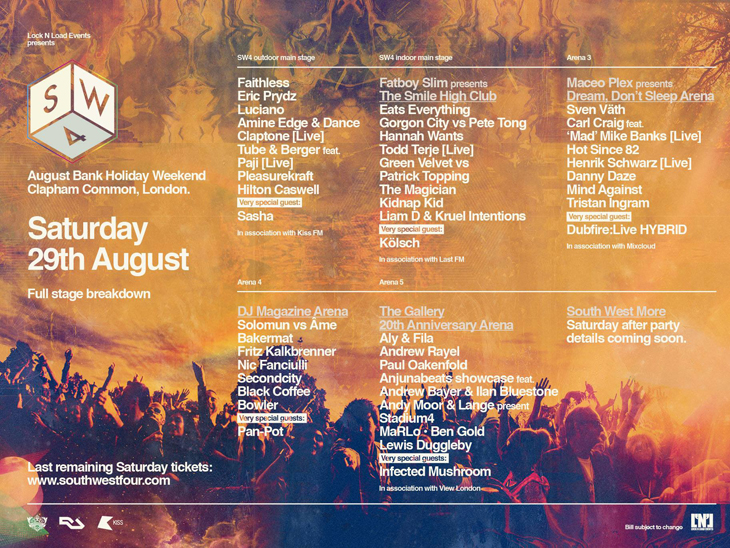 It’s the news you’ve all been waiting for; the SW4 Saturday stage breakdown announcement. Two main stages. A further three indoor arenas. One colossal day. This is 29th August at South West Four 2015…

With an increased capacity and a bigger festival site, this year allows us to do something we’ve wanted to for a very long time, introduce a second main stage! Specifically a 10,000 capacity indoor arena, which will go down as the biggest indoor structure ever to be built on Clapham Common and on day one will showcase the UK debut of Fatboy Slim’s brand new concept; The Smile High Club.

In addition to this we welcome the return of our mammoth outdoor main stage, plus additional arenas coming courtesy of Maceo Plex’s Dream, Don’t Sleep, DJ Magazine and The Gallery. Read on for a full stage breakdown and find out where your favourite acts will be playing across the day. 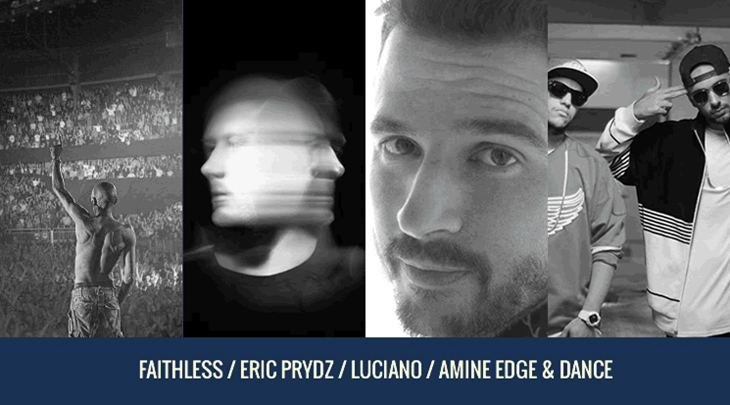 It’s not every day that one of the world’s greatest electronic acts decides to reunite in celebration of their 20th Anniversary, so for Faithless to choose SW4 to host their exclusive homecoming performance makes this the most talked about booking in our history. They will close our outdoor Main Stage and will be joined by Eric Prydz and Sasha who return at the very top of their game in addition to some very tasty SW4 debutants; CUFF bosses Amine Edge & Dance, Claptone who brings his ‘Immortal’ Live Show to the Capital for the very first time. Kittball’s Tube & Berger featuring Paji [Live] and tech house duo Pleasurekraft finalise the greatest SW4 Saturday main stage line up we’ve ever put together. 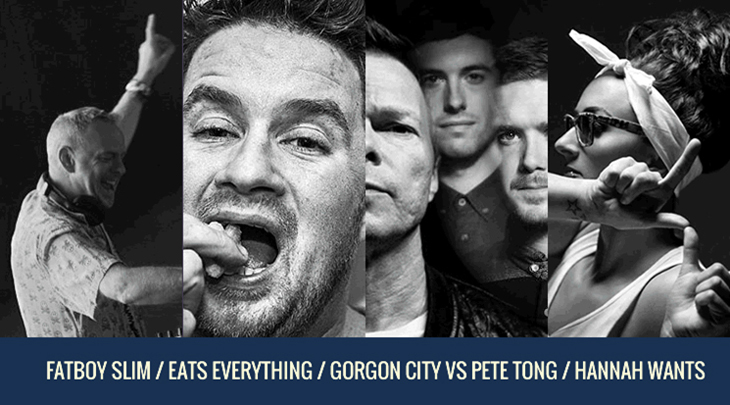 The debut of our indoor main stage will witness the return of a very special host to present his brand new concept, The Smile High Club in the UK for the very first time. Returning after headlining the festival back in 2010, Norman Cook aka Fatboy Slim has hand-picked an extraordinary group of artists to join him on his adventure. Eats Everything returns after hosting an Edible stage in 2014, UK house dons Gorgon City will go into battle with the voice of electronic music Pete Tong, in addition to performances from breakthrough star Hannah Wants and the incredible Todd Terje [Live]. Relief Records boss Green Velvet and Hot Creations favourite Patrick Topping will also go head to head, whilst The Magician and Kidnap Kid both make their debut SW4 performances. Kölsch also returns as the stage’s very special guest with another electronic masterclass set to be delivered by the incredible Dane. 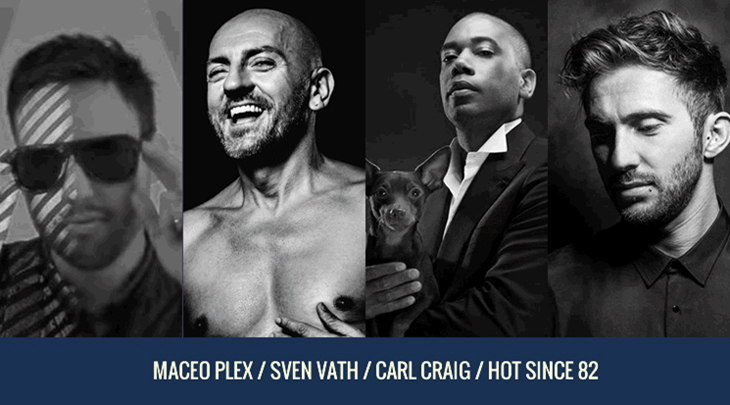 With the stage proving to be such a runaway success last year, inviting back Maceo Plex to host his Dream, Don’t Sleep arena was at the top of our list for 2015. After debuting the project at SW4, the Ellum Audio boss returns with a stellar line-up bursting with the world’s leading underground talent. This includes Cocoon boss and electronic royalty Sven Väth, Detroit legend Carl Craig who will be joined by Underground Resistance’s ‘Mad’ Mike Banks [Live] in an ultra-rare UK performance and worldwide phenomenon Hot Since 82. Innervision’s Henrik Schwarz [Live] makes his SW4 debut, on top of house and techno slayers Danny Daze, Mind Against and Tristan Ingram. To cap off an already world class line up, Dubfire brings his brand new live:HYBRID show to London for the first time. 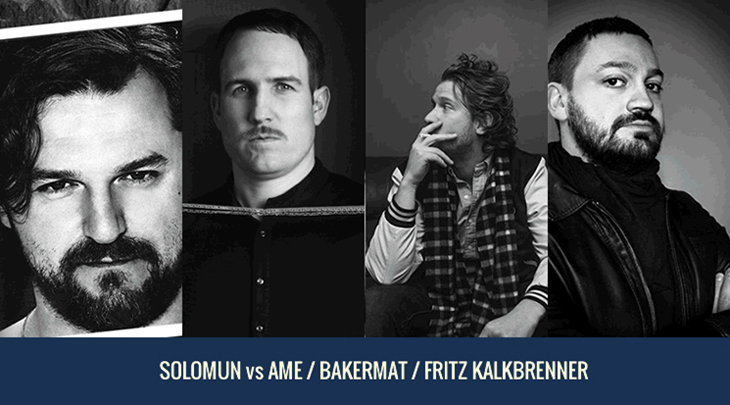 Also returning after playing a significant part in last year’s success is DJ Magazine. This year they host a stage each day with the Saturday headlined by one of the day’s most eagerly awaited performances. Diynamic and Innversions bosses Solomun and Âme will go head to head for a truly special delivery of the very finest house sounds. Chart-topping Dutch star Bakermat has also been invited to SW4 for the first time in a UK festival exclusive, whilst another exclusive comes from Fritz Kalkbrenner, who returns to the Capital following a roadblock event at Electric Brixton in February. Saved boss Nic Fanciulli, techno icons Pan-Pot and UK favourite Secondcity also join the bill as does South Africa’s electronic hero Black Coffee. 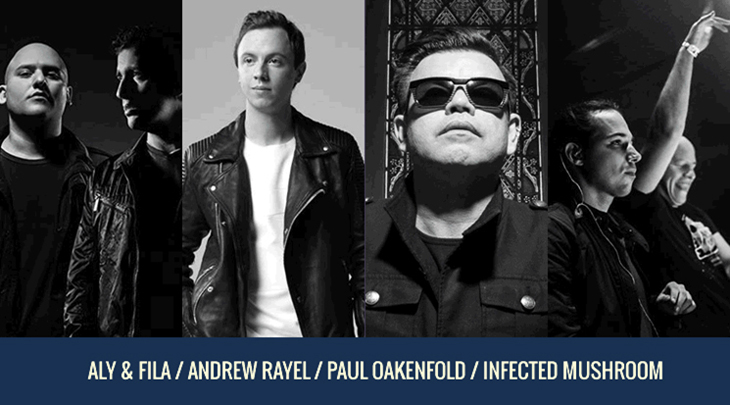 Also returning for 2015 is one of the UK’s great clubbing institutions; The Gallery. This year the night has celebrated an incredible two decades at the top. With a very special 20th Anniversary stage confirmed for South West Four 2015, the line-up is certainly worthy of the cause. The stage will be headlined by Gallery favourites Aly & Fila, who return to London for the first time in six months. They will be joined by worldwide star Andrew Rayel, the one and only Paul Oakenfold, an Anjunabeats showcase featuring Andrew Bayer and Ilan Bluestone, Andy Moor & Lange who return to present their new project Stadium4, Australia’s #1 DJ MaRLo, Ben Gold and the unmistakeable Infected Mushroom who join us as very special guests. 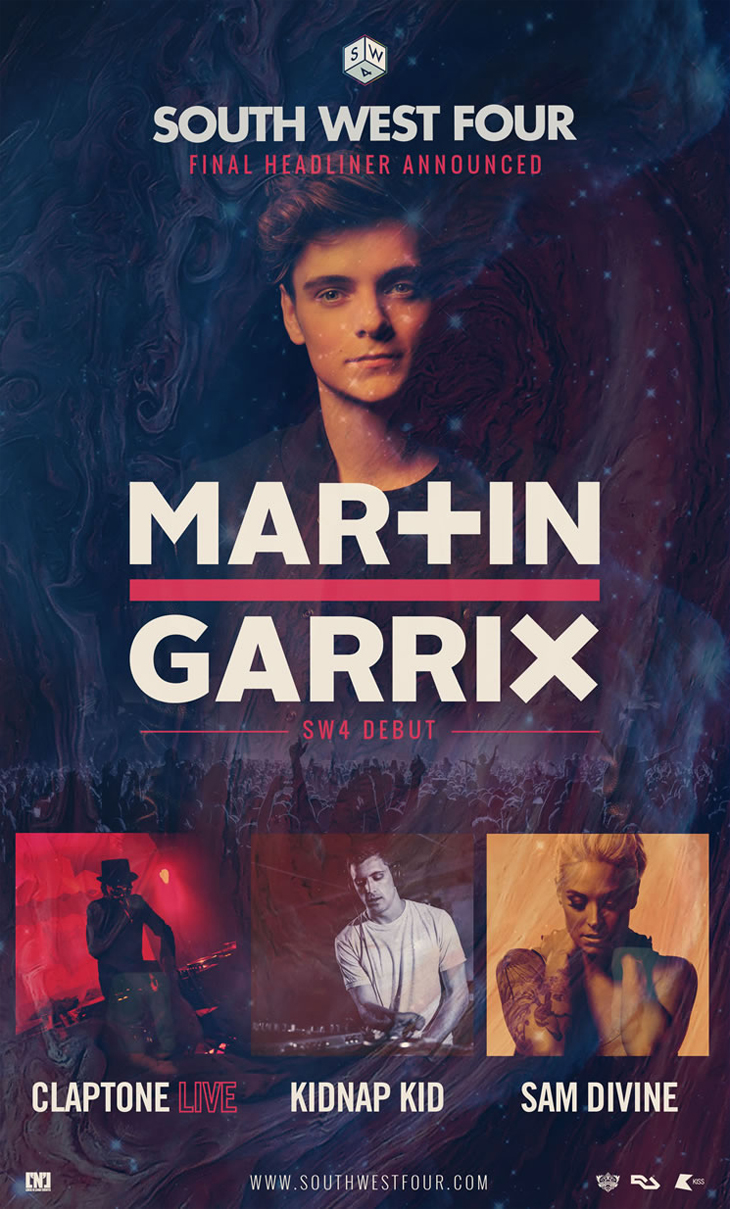 From Armin to Tiesto, Ferry to Hardwell and Fedde to Sander, the extensive list of superstar DJs produced by a country as small as the Netherlands is simply unparalleled.

This well-oiled conveyor belt of instantly recognisable, house hold names have been a staple diet of South West Four lineups over the years. 2015 will be no different. Having previously announced that Armin van Buuren will return to SW4 this summer to present the UK debut of his Gaia alias, the Dutch will also be represented by two of their fastest rising stars over the past year; Bakermat and Oliver Heldens. Today we announce the final Dutchman to be added to our 2015 lineup. An International globetrotting, platinum selling artist, who is adored by millions worldwide. And all at the age of just 18… 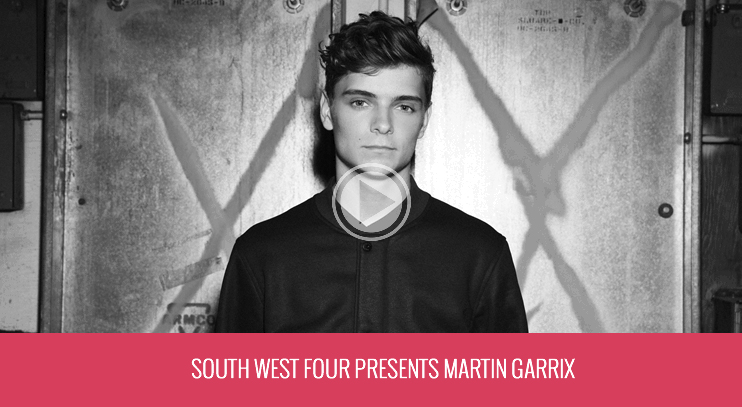 When it comes to modern times, no other musical prodigy has dominated airwaves and filled stadiums across the planet like Martin Garrix. In the space of less than two years this Dutch teenager has taken the world by storm, with a list of achievements which often prove difficult to comprehend. Aged just 16, Martin became the youngest producer to have ever reached the number one spot in the Beatport charts. He has since achieved a UK #1 selling single, broke Top 10 charts in a further ten countries and headlined many of the world’s most popular electronic music festivals including Ultra, Electric Daisy Carnival, Tomorrowland and Mysterland. In an ultra-rare London performance, Martin returns to the Capital on Sunday 30th August to make his South West Four debut. We’re ready. Are you? 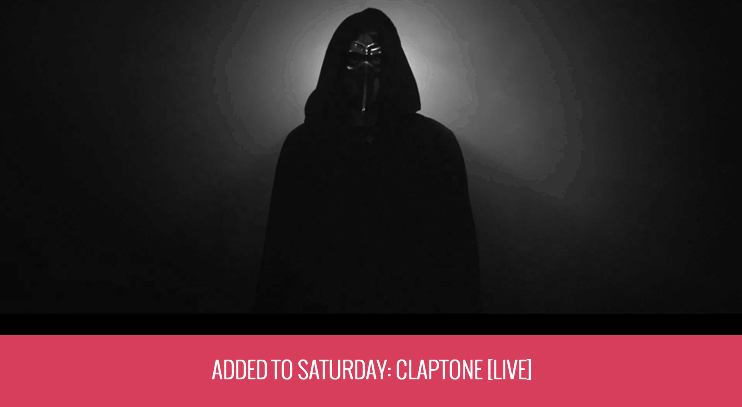 As one of the hottest artists currently residing in the global electronic scene, South West Four is delighted to bring Claptone’s incredible live show to London for the very first time on Saturday 29th August. Having featured on Radio1’s Essential Mix and headlined Ministry of Sound this past weekend alone, Claptone has been on a crest of a wave in recent times. His latest track ‘The Music Got Me’ achieved Essential New Tune status on Pete Tong’s Radio1 show a couple of weeks back and completed a hat-trick of Claptone productions which have stormed Beatport’s ‘Deep House’ Top 10 this year. With more productions on their way this summer via his debut album, the man behind the mask will illustrate at SW4 that when it comes to 2015, this is the year of Claptone. 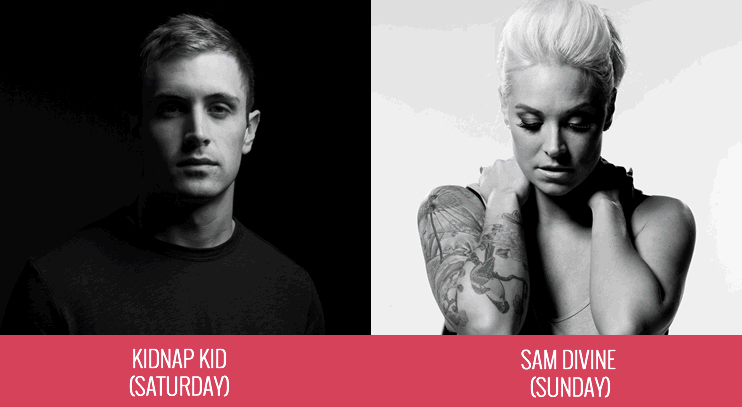 A key member of Rudimental’s colossal Black Butter camp, Kidnap Kid has ridden the house and garage renaissance of recent times, to develop his own sound that makes him difficult to pigeonhole. Setting the trends for others to follow and with the continued backing of Black Butter, the future looks very bright for this young tastemaker. Kidnap Kid can be found playing Fatboy Slim’s Smile High Club at SW4 on Saturday 29th August.

As the first lady of Defected Records, Sam Divine is the guaranteed floor-filler and party starter who has developed into one of the most popular and passionate DJs on the house circuit. Armed with a summer diary filled with tour dates across Europe and beyond, her sets are a blend of deep, vocal and Balearic house, with the mighty feline making her South West Four debut on Sunday 30th August. 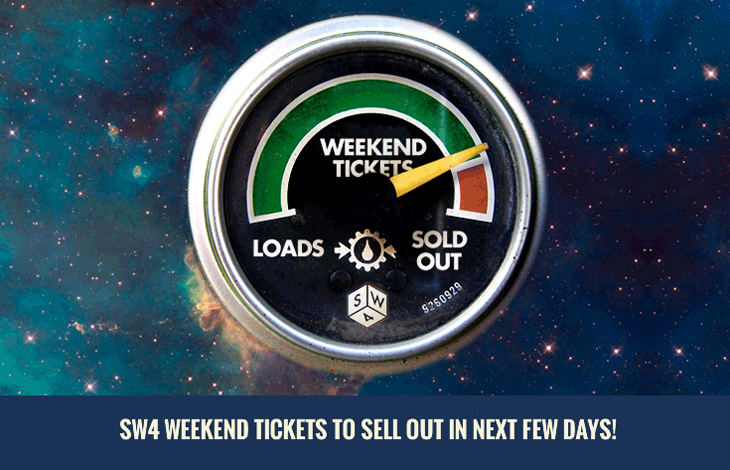 With a crazy month at SW4 proving to be the best April ever in terms of sales, we can confirm that we are now down to our last remaining weekend tickets. If you want be part of the biggest edition of South West Four to date and experience our most ambitious ever line-up, we strongly advise you to book your place now as these will only be available for the next few days. Once these are sold, no more weekend tickets will be released and only single day tickets will be available. You have been warned! 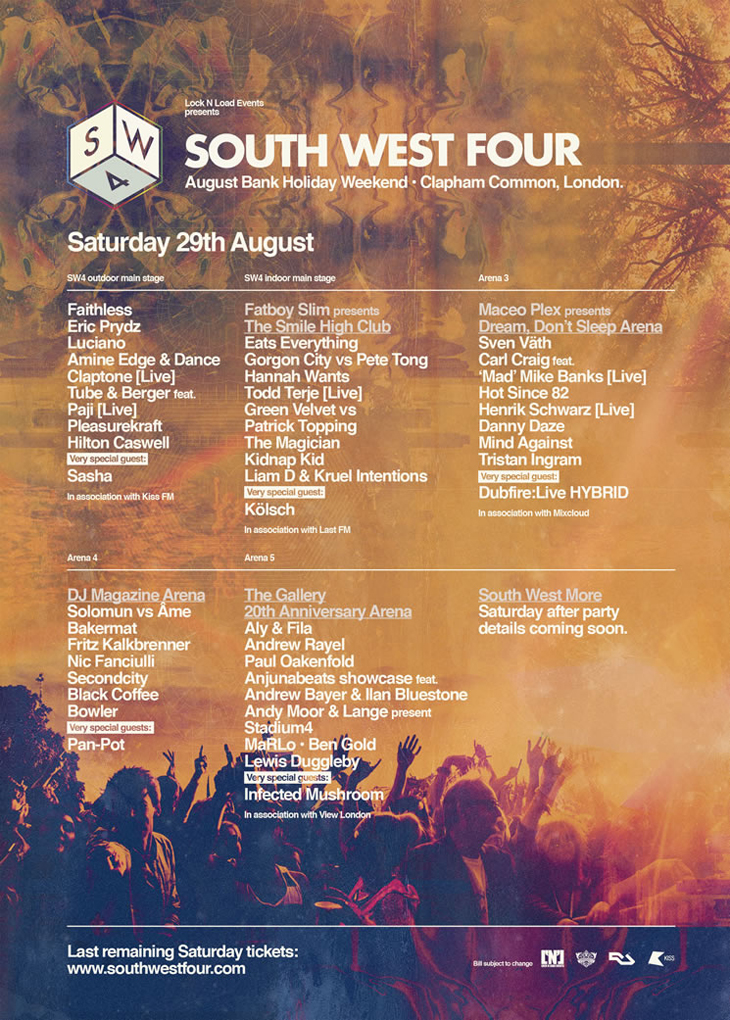