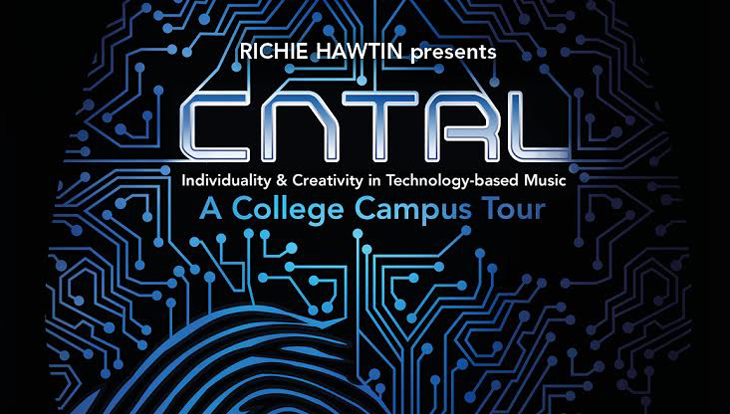 A COLLEGE CAMPUS TOUR  COMES TO A SUCCESSFUL CLOSE

THE INNOVATIVE, INVENTIVE AND IMMERSIVE EXPERIENCE

RICHIE HAWTIN TO RECIEVE THE AWARD OF HONORARY DOCTORATE OF THE UNIVERSITY OF HUDDERSFIELD, U.K

At the centrepiece of CNTRL: Individuality & Creativity In Technology-Based Music, there was an hour-long masterclass produced and hosted by one of the world’s premier electronic music schools Point Blank Music School. The day culminated on a discussion with RICHIE HAWTIN, Ean Golden of DJ TechTools as lecture moderator, and various DJs such as Dubfire, Victor Calderone, Chris Liebing and Dantiez Saunderson at each respective date as well as special guest speakers. In Los Angeles at UCLA, Grimes joined for a discussion. 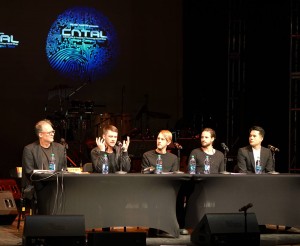 The talks stroked provoking ideas and practices for burgeoning musicians. Look for an audio version of the lectures from each date to be released on the CNTRL SoundCloud page. The first one from the tour’s launch April 15 in Boston at Berklee College of Music with Richie Hawtin, Matthew Dear, Matador and Ean Golden is available to hear to now HERE!

Says Michael Bierylo, Chair, Electronic Production and Design at Berklee College of Music who also participated as a guest speaker of the school’s experience,, “CNTRL brought a powerful mix of ideas and inspiration to Berklee. The lecture gave our students the opportunity to get inside the creative mind of an insightful and eloquent group of artists. They learned that nurturing creativity is a life-long process, and that many of the issues they face as students are the same ones that established artists work with throughout their careers. The Masterclass with Matthew Dear was a brilliantly done. Dear was a clear and engaging presenter, and students learned a great deal of specific information they could immediately use in developing their own work.“

A technology marketplace took place at each stop while lectures happened, offering students exclusive discounts on participating brands such AIAIAI, Beatport, DJ Techtools, Funktion One, Little Bits, Livid, Pioneer DJ, Roland, Splice, SubPac and Traktor (Native Instruments). At night, attendees got to witness everything come to life during shows by CNTRL’s artist, packing out such venues as Webster Hall in NYC, Coda in Toronto and DNA in San Francisco.

In other news, Richie Hawtin will receive the award of Honorary Doctorate of the University of Huddersfield, U.K. at a ceremony which will take place on Monday, July 13. Hawtin, described by the New York Times as “one of the electronic dance world’s intellectual forces” will be one of eight honorary award recipients.

„After an intense second CNTRLedu tour it’s time to reflect on all the important and inspiring ideas we’ve been talking & teaching about and continue pushing the electronic music scene forward with positive momentum,” says Richie Hawtin. “All my thanks & respect to the incredible artists & friends who were so honest in their stories & opinions during the lectures & masterclasses! You and all the aspiring new talents we met on the road – you all make me very proud to be part of this creative industry!“

Some of CNTRL’s most notable quotes include:

„Sound unique and commit… the human has to transcend technology and that’s what people will hear.“ – Richie Hawtin @ Berklee College of Music

„When I show friends my songs in progress, that’s when they start to feel ‚real‘ for me.” – Grimes @ UCLA

„Rejection is just another form of redirection. It can open you up to a whole word of possibilities.” – Chris Liebing @ UCLA

„My main rule was always never to use a stock sound, always manipulate and experiment.” –Matthew Dear @ Berklee College of Music

„Those accidental „mistakes‘ that happen when I play live can sometimes be the winning pieces of my next track.“ – Matador @ Penn State

“Once you find your own sound, you find the strength and courage to stay true to that. Keep going even in moments when you’re not blazing on fire and relevant with everyone around you. It’s because you love to make music. It’s making sure that the music isn’t about the technology and tools, but truly about the music. Because that’s how humanity and the soul are communicated. The soul is the true tool.” –Richie Hawtin @ Berklee College of Music

„There is a place for people who are just DJs (and don’t produce). However, putting out records is important. So if you can’t or don’t produce in a DAW, work with someone who does and collaborate. As a DJ you have an ear for what works…use it.“ – Ean Golden @ Berklee College of Music

„Try and finish every track, even if you don’t like it at the end – you’ll learn something.” – Matador @ Berklee College of Music

CNTRL is all about engaging new and old, past and present North American fans of „EDM“ (electronic dance music) and showing them the roots of the music, the history of a global movement and demonstrating what the future of music technology and performance has the power to become.

Since launching in 2012 as the CNTRL: Beyond EDM tour, the outing has embarked on a cultural engagement, bringing together fans of electronic dance music and those interested in it into deeper forms of the genre by educational daytime lectures on music technology. Lectures focus on the techno and technology aspects of modern-day electronic music, presenting the more futuristic and underground side of the genre, as championed by Richie Hawtin and his peers for the last two decades.

Central to the CNTRL concept are daytime seminars in the colleges to inform and inspire people about technology, music production, live performance, and the business of electronic music. CNTRL will be a future thinking session, but will also ensure the students leave with a deeper understanding of how the genre developed to where it is today. The event then ends with a club gig in the evening, giving the students a chance to experience the artists in action.