Pohoda is going to the gala ceremony organized by the most prestigious festival awards with the record seven nominations leaving behind other popular events such as Roskilde (5), Lowlands (4), Sziget (3) or Exit (3). Thanks to the votes from its visitors, Pohoda is, again, shortlisted in Top 10 in the category of Best Medium-Sized Festival in the Old Continent. Music professionals shortlisted Pohoda in six more categories: Line-Up of the Year, Promoter of the Year, The Green Operations Award, YES Group H&S Innovation Award, The Brand Activation Award as well as Take a Stand Award (honoring important social activities). 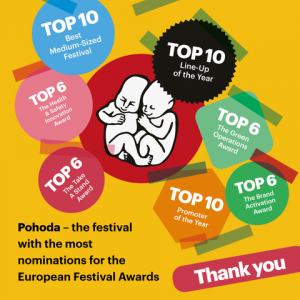 Imagine a movie filmed by a Slovakian director heading to Cannes with seven nominations leaving behind renowned English, German, French, Italian or Spanish filmmakers. This is the second time in a row that a similar situation happened to Pohoda in the festival world. Our festival has conquered shortlists in the prestigious European Festival Awards poll (from approximately 350 European festivals). Roskilde (Denmark) with five nominations is placed second and is followed by Lowlands (UK, 4 nominations). Sziget (Hungary), Exit (Serbia), Wacken (Germany), Woodstock (Poland) and Electric Castle (Romania) received three nominations. Other popular events such as Glastonbury, Melt!, Lollapalooza Berlin, Helfest and Ment (Slovenia) have two nominations. Out of festivals with one nominations, we would like to mention, for example, our neighbor, Colours of Ostrava. Pohoda made it to Top 10 in the category of Best Medium-Sized Festival already in the past. Like last year, we are again nominated in the categories of Lineup of the Year (together with Glastonbury, Lowlands, Sziget, Roskilde, etc.) and Promoter of the Year, a list that also features the biggest names in live music industry such as FKP Scorpio, MOJO, etc. We are debuting in the category of Health & Safety, for which we applied with our system of solutions to meteorological situations implemented in cooperation with professionals at the Slovak Hydrometeorological Institute.

For the first time ever, a Slovak company appears among the best brands present at music-related events based in Europe. What caught professionals’ attention was a project by ZSE Energia centered around the concept of photovoltaic stage as well as their solar lamps that provide festival site with lighting. In the category of Take a Stand, the winning installation of Public Festival Award – Minaret (meaning lighthouse) – won the jury over. The lighthouse represents a safe harbor, a hope for all the people in dire straits. The construction by young Prešov-based architects is a reaction to the nonsensical statements made by politicians explaining why we can’t help people in need. This year, the installation appeared at Sziget in Hungary as well. Whether we can turn one of the nominations into an actual first award for a Slovak event in the most prestigious festival awards or not is something we will learn at the gala ceremony on January 17 in Groningen, the Netherlands.