Oxbow will blow your mind, Bishop Nehru will make you think, King Ayisoba will pick you up, and Jacques Greene will make you groove. The artists in the latest batch of announcements are as consistently excellent as they are diverse.

Oxbow
Oxbow broke their prolonged silence last year with the excellent album Thin Black Dude. Even today, when hardly anything in music is discouraged and practically everything is welcome, the California act remains among the most original guitar bands on the scene. Because what other label could you use to describe music that flows freely between hardcore punk, noise, and blues, with the odd blend of baffling jazz, twisted metal, and other unnameable experiments? This music has everything going on, and thanks the charismatic and unpredictable frontman Eugene Robinson, anything can happen at live shows.

Bishop Nehru
He’s won praise from Kendrick Lamar and grabbed a chance to tour alongside the Wu-Tang Clan. Nas signed him onto his label, and MF DOOM teamed up with him to produce a whole album: NehruvianDOOM. Who is the 21-year-old rapper that earned the seal of approval from practically all the big names in American hip hop? His real name is Markel Scott. Hailing from the town of January, New York, Scott is a true child of 21st-century eclecticism, taking inspiration from jazz, rock, pop, and hip-hop classics to produce albums that are surprisingly mature and original. This is what the future of hip hop sounds like.

King Ayisoba
In his home country of Ghana, King Ayisoba does in fact reign supreme. Playing along on his two-string kologo, he belts out hypnotic lines in his trademark raspy voice. In keeping with the balanced African tradition, his lyrics deal with tough issues like the fight for a better future for himself and others, but are sung to the rhythm of happy, thrilling music that’s bursting with energy. A frequent guest on European stages, King Ayisoba has plenty of friends over here, including Arnold de Boer of the legendary Dutch act The Ex, who produced the King’s last two albums, Wicked Leaders and 1000 Can Die. No surprise here: if punk were invented in Ghana, this is what it would sound like.

Jacques Greene
A Montreal-based DJ and producer whose 2017 debut album Feel Infinite delivered on its title, proving that the house music format is in fact boundless, especially when combined with the emotions of soul and sprinkled with talent and imagination. And that’s something Philippe Aubin-Dionne has plenty of: just check out his production work for Katy B, Tinashe, and How To Dress Well. 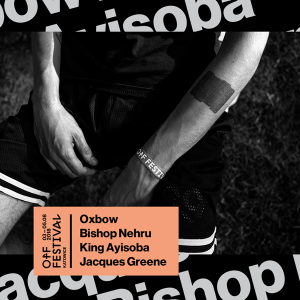 Everyone who has been to OFF Festival highlights it’s unique atmosphere, which has to be experienced to fully understand what the festival is really about!

Tickets
Three-day passes are now available at the OFF Shop for 260 PLN. This price lasts until February 18 or until the first batch of tickets is sold out! Campground tickets are also available for 70 PLN.