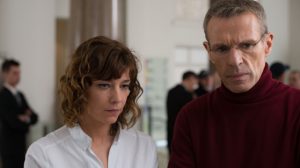 Leading French actor Lambert Wilson studied acting at the Drama Centre London, and thanks to his perfect English many early roles in his career were in English-language films. In 1977 he appeared in Fred Zinneman’s Julia, and in 1982 he joined Sean Connery in Zinneman’s drama Five Days One Summer. In subsequent years, however, he appeared in films directed by masters of French cinema, including Claude Chabrol (The Blood of Others, 1984) Andrzej Żuławsk (The Public Woman, 1984) and André Téchiné (Rendez-vous, 1985).

He has also worked with renowned English director Peter Greenaway (The Belly of an Architect, 1987), and appeared in Polish legend Andrzej Wajda’s drama The Possessed (1988) and James Ivory’s historical drama Jefferson in Paris (1995). Wilson has appeared in four films by Alain Resnais – Same Old Song (1997), Not on the Lips (2003), Private Fears in Public Places (2006) and You Ain’t Seen Nothin’ Yet (2012).

Lambert Wilson portrayed the lead in Xavier Beauvois’s Of Gods and Men (2010, winner of the Grand Prix at the Cannes Film Festival), and last year he impressed audiences as Jacques-Yves Cousteau in the biopic Odysseus. Wilson has been nominated for six César Awards.

French actress Céline Sallette first appeared on the big screen in director Philippe Garrel’s 2005 drama Regular Lovers, which won the Silver Lion for directing at the Venice International Film Festival. She also appeared in Sofia Coppola’s Marie Antoinette and in Clint Eastwood’s fantasy film Hereafter (2010). Her performance in House of Tolerance (dir. Bertrand Bonello, 2011) earned her a Lumiere Award and a César nomination for best actress. Audiences could also see her in Jacques Audiard’s 2012 film Rust and Bone, and in that same year she gained wider recognition for her role in the television series The Returned. In 2014 she played the title role in Tony Gatlif’s musical film Geronimo.

AKI KAURISMÄKI’S THE OTHER SIDE OF HOPE, WILL BE PERSONALLY INTRODUCED BY SHERWAN HAJI AND SIMON AL-BAZOON.

Aki Kaurismäki’s The Other Side of Hope, which is being shown in the festival’s Horizons section, will be personally introduced by two of the film’s actors, Sherwan Haji and Simon Al-Bazoon.

The screening will take place on Sunday 2 July at 11:30 am in the Grand Hall of Hotel Thermal.

A cargo ship docks on a cold Finnish shore carrying a stowaway, a Syrian refugee named Khaled. He’s made it to Europe, but an asylum hearing still awaits and the outcome is uncertain. While hope is the last thing to die, he has to accept the possibility of having to live on the streets of Helsinki. At the same time, in another place, morose Wikström is dealing with a family catastrophe. One day he suddenly walks away from his door-to-door shirt-selling business, puts on a stony expression, and heads to the casino with a lifetime of savings. Will he parlay the cash into the restaurant he’s always dreamed of opening? Fans of the distinctive Finnish director will find the hallmarks of his work put to effective use in a story that brings together two disparate lives: laconic humor, subtly humorous gags, and his inimitable set design. And this time as well, Kaurismäki’s cinematic world, in which the situation usually has an unexpected outcome, is governed by an odd set of rules. Presenting a melancholy, yet optimistic message on the strength of solidarity, the picture was a highlight of this year’s Berlinale, where it deservedly earned Kaurismäki the Silver Bear for directing.

Already for ten years at the Karlovy Vary IFF – regular meetings with directors, actors and other film industry personalities who present their work as part of the festival programme. The meetings are held at the Vodafone Lounge and in cinemas A and C at the Hotel Thermal.

Unless indicated otherwise, the meetings take place in English, are not translated, and do not require a ticket or accreditation.

This year’s recipient of the Crystal Globe for Outstanding Artistic Contribution to World Cinema, American composer James Newton Howard, presents his work and, using excerpts from film and live piano, reveals the mystery of composing film music. Howard has written the soundtrack for an incredible number of films, including legendary movies such as Pretty Woman, The Sixth Sense, The Devil’s Advocate and Dark Knight, for which he and Hans Zimmer both earned a Grammy Award.

The Master Class will be hosted by American film critic and historian Leonard Maltin with composer Jan P. Muchow.

This year, the Karlovy Vary IFF is proud to announce a new initiative in partnership with Variety magazine, Barrandov Studio and Czech Anglo Productions. Artisans in Focus will spotlight the brilliant individuals who create the images and sounds that form the magic of movies. Panel of internationally recognized creative professionals will illuminate crafts such as cinematography, editing, and production and costume design, and will explore how artisans work with directors, producers and actors. This year´s guests are: Monika Willi – an award-winning Austrian editor, Wojciech Staroń -Polish cinematoghrapher, Annell Brodeur – American costume designer and Ondřej Nekvasil – Czech production designer.

Debate will be hosted by Peter Caranicas, Variety’s Managing Editor

KVIFF TALK with the creators of A Ghost Story

Director David Lowery, producers Toby Halbrooks and James M. Johnston, and actor Casey Affleck first met while working together on Ain’t Them Bodies Saints, which the director and producers presented in person at the 2013 Karlovy Vary festival. This year, they will present their latest film, A Ghost Story, and actor Casey Affleck will accept the KVIFF President’s Award. The film’s creators will share their experiences form their past collaborative efforts, and also from filming of their most upcoming film The Old Man and the Gun.

The session is hosted by Scott Feinberg of The Hollywood Reporter.

This KVIFF Talk presents the monograph In Between Images: Cinematographer Jaroslav Kučera’s Media Practices – a critical analysis of the legacy of this leading Czech cinematographer, long-time teacher at FAMU, and collaborator with Věra Chytilová, Vojtěch Jasný and Karel Kachyňa. The presentation includes excerpts from films that Kučera worked on and unknown material from his archives – photographs, family snapshots, and test footage. There follows a screening of the experimental film 1984: The Year of Orwell, which Kučera shot with Jiří Sozanský inside Prague’s burnt-out Trade Fair Palace. Commenting on the archival materials will be the book’s author Kateřina Svatoňová. Aleš Najbrt will discuss the book’s graphic design.

Presentation will be held in Czech with English translation.

Director Ken Loach and screenwriter Paul Laverty have worked together on 12 feature-length and two short films, in the process becoming pioneers of British social realist cinema with a humanist message. At this year’s festival, they will present their 1995 film Land and Freedom, which is being shown on the 30th anniversary of the founding of the European Film Academy. They will also receive a Crystal Globe for Outstanding Artistic Contribution to World Cinema. At the KVIFF Talk, they will talk about their careers and many years of working together.

Over a period of more than twenty years, Canadian independent filmmaker Denis Côté has shot more than 12 feature and 16 short films in his distinct and uncompromising style. His films are regularly shown at large international film festivals, where they have won numerous awards. Vic and Flo Saw a Bear won the Silver Bear and the Alfred Bauer Prize at the Berlinale in 2013. His most recent work, Boris Without Béatrice, premiered in Berlin in 2016. This year’s KVIFF is showing his first ever film, Drifting States, which earned the Golden Leopard at the Locarno Film Festival. During his KVIFF Talk, he will talk about the how his work has evolved over time.

The event will be hosted by dramaturge and journalist Aleš Stuchlý.

Actor and musician Jeremy Renner portrayed the main character in the Oscar-winning film The Hurt Locker, and appeared in the Avengers action series, Captain America and two films in the Mission Impossible series, but also in the crime drama American Hustle and in the recent unconventional sci-fi film Arrival. At this year’s festival, Renner will receive the KVIFF President’s Award and present his most recent film Wind River. The film’s screening in the Grand Hall will be followed by a discussion.

The discussion will be hosted by KVIFF’s artistic director Karel Och.

UMA THURMAN TO PRESENT KILL BILL AT THE OUTDOOR CINEMA.

On Sunday 2 July at 10:30 pm, actress Uma Thurman, one of the guests at the opening ceremony of the 52nd Karlovy Vary International Film Festival, will present Quentin Tarantino’s cult film Kill Bill. The programme features both parts of this epic story of passion, betrayal and the sweet taste of revenge, originally released separately in cinemas.

Admission to the Outdoor Cinema is free!

This year’s 52nd Karlovy Vary IFF is marking three decades since the launch of the European Film Academy and the European Film Awards with the screening of several films that were awarded by the EFA and that also won other major prizes at some of the world’s most important festivals. Viewers will have the opportunity on this occasion to meet the filmmakers themselves.

„We´re delighted to celebrate this wonderful anniversary together with our respected long-time partners from the European Film Academy.“ says KVIFF´s president Jiri Bartoska.

At a KVIFF Talk in the Hotel Thermal’s Vodafone Lounge on Tuesday 4 July, festivalgoers will have an once-in-a-lifetime opportunity to hear the reminiscences of famous creative duo Ken Loach and Paul Laverty, who have worked together on 12 feature-length and two short films. Director Ken Loach will come to Karlovy Vary in order to personally present Sweet Sixteen (2002) and Land and Freedom (1995) and to accept a Crystal Globe for Outstanding Artistic Contribution to World Cinema along with his long-time screenwriter Paul Laverty.

To mark the honourable occasion of the 30th anniversary, the festival will also be showing Germany’s Oh Boy (2012), which was named European Discovery of the Year at the 2013 European Film Awards after having its world premiere in the Forum of Independents competition at KVIFF. Accompanying the film on its return visit to Karlovy Vary five years later is its director Jan-Ole Gerster. Women on the Verge of a Nervous Breakdown (dir. Pedro Almodóvar, 1988), for which Carmen Maura was named best actress at the first-ever European Film Awards will be another film shown on this occasion.

But the celebrations of the European Film Academy’s birthday will not only focus on the past. As part of the celebration, the academy will also launch a EFA Young Membership campaign to invite young European filmmakers to become members under special conditions, thus joining the more than 3,000 current members.

“The KVIFF which is attracting every year so many young people is a fantastic place to launch a campaign which is dedicated to the future of our European cinema”, says EFA Chairwoman Agnieszka Holland. 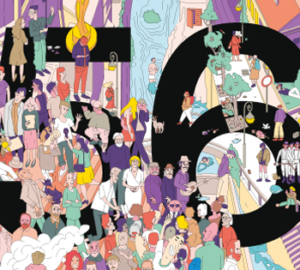