FOO FIGHTERS, FLORENCE + THE MACHINE, TWENTY ONE PILOTS, THE 1975 AND MARTIN GARRIX TO HEADLINE SZIGET 2019

FOO FIGHTERS, FLORENCE + THE MACHINE, TWENTY ONE PILOTS, THE 1975 AND MARTIN GARRIX TO HEADLINE SZIGET 2019

The ethereal chanteuse, rock gods, indie pop heavyweights, electropop duo and DJ wunderkind join Ed Sheeran on the line-up for Europe’s most diverse festival, attended by over 500,000 people each year.

One of the world’s biggest and most eclectic music happenings, Sziget prides itself on boasting a star-studded line-up year by year. 2019 will be no different, with Florence + The Machine, Foo Fighters, Twenty One Pilots, The 1975 and Martin Garrix joining Ed Sheeran on the headline bill. With over 100 award wins between the headline acts so far, as well as the exciting addition of Richard Ashcroft, Catfish & The Bottlemen, Chvrches, Jungle, Kodaline, IDLES, Superorganism, Frank Carter & The Rattlesnakes, Pale Waves, Maribou State, Frank Turner & The Sleeping Souls, Of Mice & Men, Boy Pablo, Parcels, Yungblud, Alma, Tamino, Gang Of Youths, The Blaze and more amazing artists to be announced soon, this is just the start for Sziget 2019. 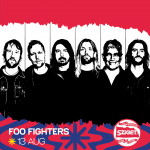 Foo Fighters are undeniable rock gods, with roots in some of the biggest bands in musical history. Boasting a discography that includes mammoth tunes such as Times Like These, Best Of You, Everlong, Learn To Fly and The Pretender, their unparalleled energy and anthemic choruses will be a festival highlight for all. 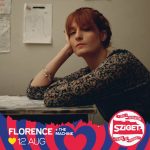 Florence + The Machine rocketed to fame in 2009 with their incredible debut album Lungs. The spellbinding vocalist and her band headlined Glastonbury in 2015 following two further number one albums, making Florence Welch Glastonbury’s first British female headliner of this century. Her otherworldly, barefooted presence onstage will ensure that the whole audience has Got The Love on Sziget’s ‚Island of Freedom‘.

The Grammy award-winning Twenty One Pilots were the first alternative artist to have two concurrent top ten singles in the United States, thanks to their single Heathens, used as the soundtrack for Suicide Squad. With five studios albums under their belt, the rap-rock inspired duo will inspire countless singalongs during their performance. 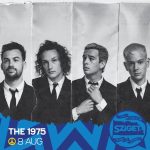 Childhood friends, The 1975 have grown up to be one of the most successful indie pop bands in the UK and beyond with two number one albums and a Brit award for ‚Best British Group‘ in 2017. With their latest album set for release at the end of November – which already boasts Annie Mac as a fan – and another album set for release in May 2019, The 1975 are set to continue their domination of the pop stratosphere. 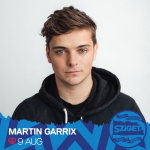 Only 22 years old, Martin Garrix is one of the most successful DJs in the world. The youngest ever recipient of DJ Mag’s Top 100 DJs in 2016, he retained his title in 2017 and 2018, becoming only the third DJ to win the award three years in a row. Since bursting into the spotlight with Animals, he has collaborated with some of the biggest names in music and produced countless chart hits, and his headline set will be one of the most anticipated moments of the week. 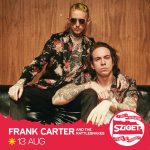 Hot off the back of a brand new solo album, The Verve frontman and Britpop legend Richard Ashcroft will be gracing the Sziget stage, as will colourful punk rockers Frank Carter & The Rattlesnakes. Metalheads Of Mice & Men promise to keep things loud, as do indie-rock favourites Kodaline. On hand to provide a more electronic and relaxed soundtrack are modern soul collective Jungle and rising star Tamino, tipped as the new Jeff Buckley. Alma and Chvrches will inject a special dose of pop, while Boy Pablo takes to the stage to represent the best of the Scandinavian indie scene. 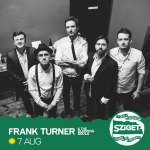 „This announcement is exciting in terms of what it means for the 2019-edition of SZIGET and also marks a new era for the festival. Our company’s mid-term strategy was launched 2018 and allows us to raise the bar and give our Szitizens what they want and deserve. Namely, a superb festival package that combines our unique, trusted and loved SZIGET experience with a festival bill of the highest international caliber.“ says Tamás Kádár (CEO of Sziget Festival)

More than just its headliners, Sziget brings together a programme of world music, theatre, cabaret, installations, performances and art. With preparations well underway for next August, year 27 is set to be Sziget’s biggest and best festival to date.
Sziget returns in 2019 between 7 – 13 August. Early bird tickets are now on sale starting at € 75. For more details on Sziget head to szigetfestival.com.