OFF Festival is proud to announce that the experimental rock legends Swans are returning to Poland for a farewell show in 2017, to be held at the OFF Festival. Swans frontman Michael Gira will also serve as curator of the Experimental Stage. Plus The Black Madonna, Circuit des Yeux, and Kikagaku Moyo also join the festival lineup, taking us from a dancefloor uprising in Chicago to a psychedelic trip to Japan. 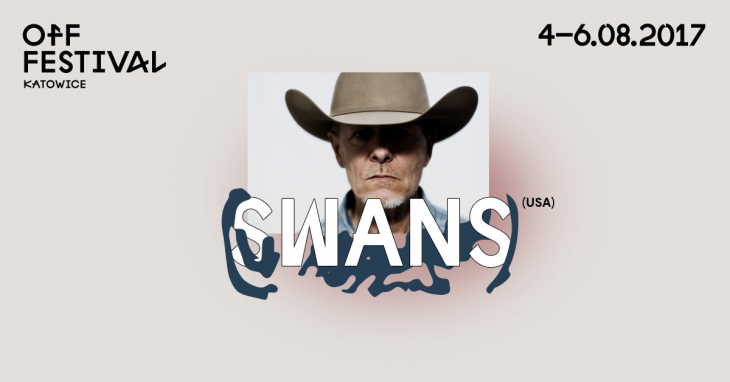 …But with one minor caveat: this time Michael’s desires will be fulfilled. First, the show in Poland will be his final performance with the band in this format (the group’s future remains uncertain, but this is definitely the end of Swans in their current form), and, second, he’ll also be performing a solo concert. Finally, Michael Gira is also coming to Katowice as a guest curator of the Experimental Stage, where he’ll be responsible for an entire day’s lineup. And he does have some experience in this regard: he crafted the program for Mouth to Mouth, held as part of the excellent Dutch festival Le Guess Who.

When The Black Madonna takes the stage, you know it’s about to go down. We’ve invited one of the world’s most popular and respected female DJs, one whose sets rest on the delicate balance between dependable hits and bold new discoveries, a well-regarded producer, to name but Exodus and A Jealous Heart Never Rests, and a resident host at the legendary Smart Bar in Chicago, which — under her curation — has been lauded as one the best clubs in the US.

Circuit des Yeux is the artistic alter ego of the American singer Haley Fohr, but it’s not her only one: she is also known to the world as the mysterious outlaw Jackie Lynn. In Fohr’s case, it’s impossible to determine with complete certainty the boundaries between the personal and the artistic. The intimate, disturbing songs performed in a low, dark voice pluck your most sensitive heartstrings, touching your most deeply-hidden spots and emotions. To experience this for yourself, try the album In Plain Speech (Thrill Jockey, 2015), recorded by Circuit des Yeux in collaboration with friends from the Chicago alternative scene: musicians involved in such projects as Cave, Bitchin Bajas, and Little Scream. Pitchfork calls it a “meditative and mesmerizing” album, and it’s hard to argue otherwise.

The name Kikagaku Moyo, as we all know, translates to “geometric patterns.” And there’s plenty of irony in that name, because while the music played by this Japanese band is full of elaborate but disciplined art-rock structures, they bend and dissolve in psychedelic acid. The musical references range from Krautrock to Indian ragas to their own local psychedelic traditions, chief among them being Acid Mothers Temple. You’ll find a sample of their sound in the OFF Festival Katowice 2017 promotional video. Kikagaku Moyo was founded in Tokyo in 2012, but they’ve already put out four albums, the latest of which, House in the Tall Grass, is a truly untethered flight into the stratosphere. Do you have the guts to get on board?