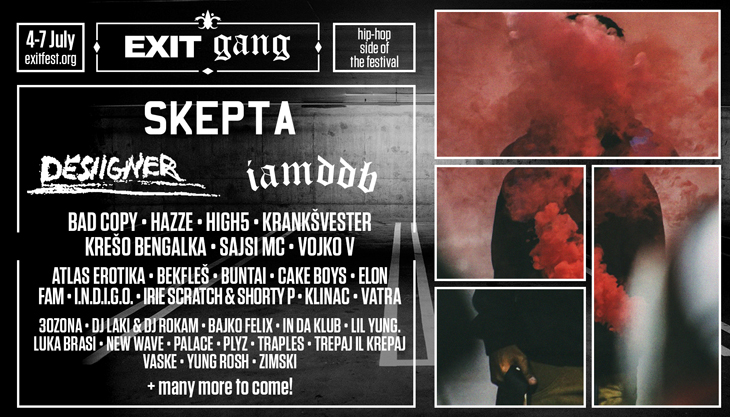 After announcing world-famous bands like The Cure and Greta Van Fleet, along with some of the best DJS like Carl Cox and Amelie Lens, EXIT just got even more diverse with over 30+ hip-hop acts! They are led by UK’s king of rhymes and grime, Skepta, who’ll bring his planetary hits, including „Praise the Lord“ and „Shutdown“!

Heating up the Main Stage, IAMDDB is also joining the lineup, after securing her place as a mainstay of the best hip-hop and RnB parties, while the master of live performances Desiigner will bring this decade’s most viral hip-hop song, „Panda“!

The hip-hop flavor will also be felt at the Addiko Fusion stage, thanks to Balkan’s rap queen Sajsi MC and the beloved rap-trio Bad Copy, but also on the Cockta Beats stage, the new hotspot for all hip-hop fans which will only feature performers of this genre! The mind-blowing line-up is currently lead by the biggest regional rap stars, Vojko V and Krešo Bengalka, joined by loads of local acts.