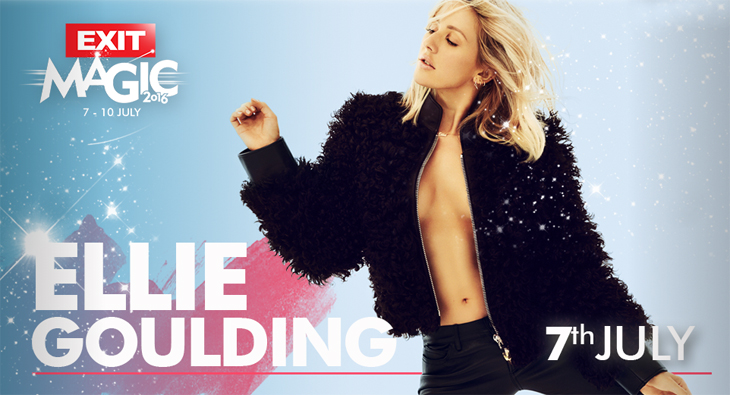 Pop superstar Ellie Goulding comes to this year’s Exit Festival to headline the opening night! With more than 17 prominent awards, multi-platinum releases and 3 billion YouTube views, the 29-year-old is considered to be one of the most wanted female performers of today. Exit’s Main Stage at the colossal 17th century Petrovaradin fortress will echo with some of Ellie’s hottest tracks including „Burn“, „Love Me Like You Do“, „Lights“, „I Need Your Love“, „Outside“, „Starry Eyed“ and many others, against a traditional, grandiose firework display.

House music royalty and one of the leaders of today’s electronic scene, Solomun, returns to Exit Dance Arena on Thursday, 7 July with a much bigger status on the world scene compared to his debut at Exit in 2010. He was named Best DJ and Producer of the Year at the DJ Awards, while he is currently working on his theme night „Solomun +1“. One of the unofficial kings of Ibiza has been standing shoulder to shoulder with the likes of Richie Hawtin (Enter) and Marco Carola (MusicOn), and is also the proud owner of his „Diynamic“ label, as well as the well-respected alternative label „2DIY4“.

The Dance Arena on Saturday night has been one of Exit Festival’s monumental moments for a long time now, a time when a full-blown swarm of cheerful visitors goes home after the Sun had long ago reached an impressive altitude. This year too, the biggest dancefloor in this corner of the world welcomes some of the hottest electronic acts. German superstar Robin Schulz brings some of the biggest hits of the decade which earned him high ranking chart placement and performances at clubs all around the world. This year saw his latest album “Sugar”, that includes collaborations with a large number of prominent names, e.g. Moby, J.U.D.G.E, Ilsey, soFLY, Graham Candy, Akon, DJ Moguai – just to name a few, as well as a Grammy nomination. Schulz will be joined on the same evening by David Guetta’s protégé, Dutch DJ, producer and Protocol recording label owner, Nicky Romero, who has been named one of the world’s best DJs by DJ Mag! He has won an MTV EMA award for the Best Dutch Act and he is one of Ibiza’s biggest clubs residents. Also performing on the same night will be Sam Feldt, who reached his peak with the hit “Show Me Love“ that ranked high on most of the European charts in the last few years. Hadrien Federiconi, also known as Feder completes the list of deep house giants for Saturday’s Dance Arena lineup. The winner of “Best New French DJ“ award at NRJ DJ Awards had his breakthrough in the world of deep house with his incredible remix of Rodriguez’s song “Sixto“, after which he released “Goodbye“ that hit number one on iTunes charts all across Europe

No Sleep Novi Sad, the second biggest electronic music stage of Exit Festival will be presenting its new program concept with some of the biggest world clubs and labels next summer during four festival nights behind the famous tunnel leading away from Dance Arena. The first to confirm their presence at Exit Festival is the Parisian club Concrete, who will host their non-stop party on Saturday, 9 July. The show will be headlined by techno wunderkind, the star of a new generation Tommy Four Seven, followed by the leading Concrete residents and current leaders of the Paris techno scene, Antigone and Francois X, as well as one of the rising stars Shlømo who will bring his intense live performance to the No Sleep Stage!

Performances at the magical Exit Adventure 2016, including Exit (7-10th July 2016) and Sea Dance (14-16th July 2016) have been confirmed by the biggest hip-hop star currently in the world, Wiz Khalifa, indie rock sensation Bastille, one of Europe’s most wanted rappers Stormzy, Belgian hitmaker Lost Frequencies, cult-status music collective Dub Pistols and the most wanted Dutch band Kensington. They are followed by an impressive list of bass performers from Petrovaradin to Jaz Beach, the first ones among them being the fathers of their genre, drum’n’bass champions DJ Hype and Andy C, together with some of the biggest dubstep stars Modestep and Zomboy. They will be joined by the most prominent names of this generation, Wilkinson, Ivy Lab and Sub Zero, whereas a special slot in the Main Stage program is reserved for the amazing Ms. Dynamite. 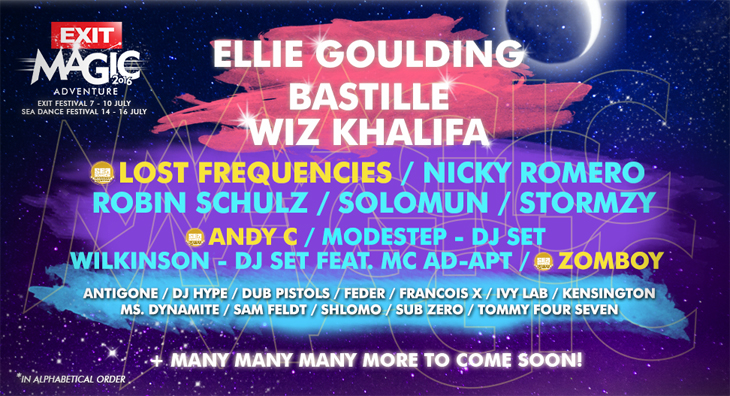 Promo Tickets to Exit Festival are available at www.exitfest.org/en/tickets. You can save up to 60% from the final ticket price in July. Accommodation and travel arrangements can be found at Exit’s official tourist agency, ExitTrip’s official website here: www.exittrip.org.