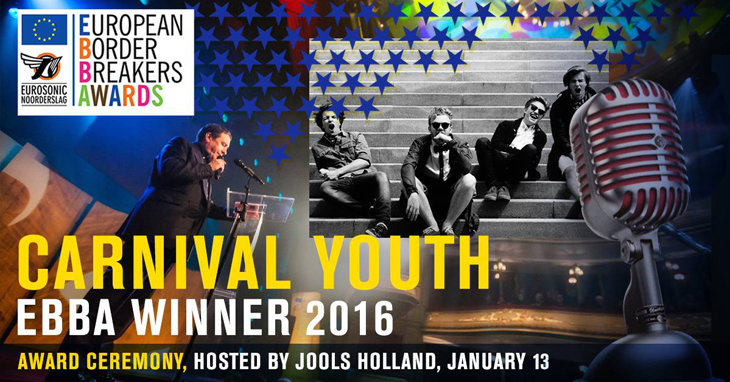 The winners of the 2016 European Border Breakers Awards (EBBA), the European music awards for emerging artists, have received their trophies this evening during a ceremony at Eurosonic Noorderslag in Groningen, The Netherlands. The ceremony was hosted by TV personality and musician Jools Holland and opened by the European Commission’s First Vice-President Frans Timmermans, who also presented the Public Choice Award to the Latvian band Carnival Youth. 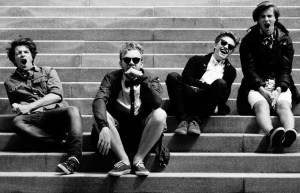 ‘No Clouds Allowed’ is the title of Carnival Youth’s debut album: a beautiful, clever indie folk record, with modern rhythms, sharp lyrics, fresh keys and melancholic melodies. As far as their sound is concerned, Carnival Youth is somewhere between Bombay Bicycle Club and Arcade Fire, and in 2014 ‘No Clouds Allowed’ won a prize for best debut album in their home country of Latvia. They are currently working on their second album.

The EBBA show also featured outstanding performances by other 2016 winners: Álvaro Soler (ES), Aurora (NO), Kovacs (NL), Oscar and The Wolf (BE), Seinabo Sey (SE) and SOAK (IE). The other 2016 EBBA winners – Christine and The Queens (FR), Robin Schulz (DE) and Years & Years (UK) – could not perform at the show.

In the upcoming year the EBBA TV show will be broadcasted by several European public broadcasters. Parts of the show can be watched through the Youtube channel of the EBBA.

EBBA
The EBBA are about breaking down borders and recognising emerging European rock, pop and dance artists who achieved success in countries other than their own.

From electro to rock, the best of the European music scene has never been short of quality, excitement and diversity. Yet our chances of hearing a breakthrough solo act or band from another European country are still all too limited. The European Border Breakers Awards (EBBA) aim to change that situation. The awards celebrate the best emerging artists of the year who have achieved success outside their home country

The EBBA winners are selected on the basis of success outside their own country with their first international release. This is measured by sales, radio airplay and live performances at festivals.

The EBBA – supported by Creative Europe, the European Union programme for the cultural and creative sectors – aims to encourage artists to perform in other countries and audiences to appreciate Europe’s wealth of music talent – wherever it comes from.

Tibor Navracsics, Commissioner for Education, Culture, Youth and Sport said: „Music is one of the most dynamic cultural domains with strong creative and economic potential. With the Creative Europe Programme, which co-funds the EBBA awards, we are making sure that music flows across borders and that young talent finds audiences all over Europe.“

First Vice-President of the European Commission Frans Timmermans added: „We want to promote and spread our cultural diversity across Europe. The results of this effort, and especially the EBBA awards today, enrich the cultural landscape and the lives of millions, but also bear economic fruit, creating revenues and jobs.“

Europe’s cultural and linguistic diversity is a strong part of its cultural appeal, but linguistic barriers sometimes make it harder for artists to work internationally and achieve cross-border success. The EBBA seek to help them overcome these obstacles.