Balaton Sound, the summer beach party, organized by Lake Balaton will once again bring the most prestigious names of the electronic and hip hop scene. The 5 days festival is celebrating its 10th edition this year with many exciting venues and programs. The line-up is now complete with DVBBS, The Chainsmokers, Duke Dumont, Bassjackers, Wiley and many more! Balaton Sound is held in Zamárdi between 6-10 July, 2016. 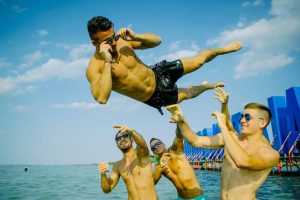 Balaton Sound, the non-stop beach party, will be as great and diverse as in the previous nine years. Celebrating its first decade the massive program of the 5 days will attract everyone who is into electronic music and hip hop. Besides the already prestigious line-up, organizers have added several new names as a final touch to the program. DVBBS, The Chainsmokers, Duke Dumont as well as Bassjackers, Andhim and Wiley will also be there in Zamárdi. The so called Day 0, 6th July, already featuring Macklemore & Ryan Lewis on the Main Stage, Oliver Heldens in the Telekom Arena will also host acts at the Jager Arena, as Chocolate Puma or Milk & Sugar. Among the program we can also find Stadium X and Peter Kruder.

Besides the biggest stages as the Main Stage, the Telekom Arena and Jager Arena, many program venues will great vibes as well. This year the Bass Stage powered by Bladerunnaz will host more than 40 acts such as Mefjus, Die, Murdock, Black Sun Empire, The Upbeats, Nickbee, Dismantle and Lady Waks. The energy is guaranteed and the music will be powered from 5 in the afternoon until morning. Several venues will be built on the Lake itself, so one can enjoy names such as Guy Mantzur, Watermat, H.O.S.H. and more.

Those who want to leave the festival area for a short while, but stay in the festival atmosphere should get their ticket to the special exclusive Balaton Sound boat parties, taking place every day on Lake Balaton! Music will be brought to the boat by special DJs each day as Agoria and Rodriguez JR. Live on 6th July, Andhim on 7th July, Adriatique on 8th July, H.O.S.H on 9th July and Peter Kruder on the 10th July.

Various accommodation possibilities are still open, so one can choose to stay next to the festival area at the Beach Camping in pre-settled caravans or in the Caravan Camping or just in the regular camping area that is located approximately 10 minutes from the festival area.