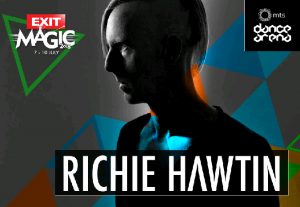 Richie Hawtin will perform his completely new and revolutionary live performance in the mts Dance Arena at EXIT on Sunday, 10 July after it’s highly anticipated debut at Sonar. The techno pioneer and icon, responsible for the popularization of electronic music and the genre’s numerous technological innovations, has been collaborating with Exit’s production team since last October on all creative and technical details, which will soon be announced on a global level. The arrival to the world famous mts Dance Arena on 9 July has also been confirmed by the British DJ sensation Hot Since 82, while the lineup for Friday 8 July has been strengthened by the artist featured on Resident Advisor’s top five, the Scottish DJ and producer Jackmaster. The next generation of popular producers will be represented by London’s club duo MANT.

Richie Hawtin is the key figure of modern electronic music, a true innovator and the one of the founders of the central techno label Minus, but also legendary Plus 8. In 2014, Hawtin resurrected his famous alter-ego Plasticman and released a new album – “EX”, which also became his first release since 2003. A true revolutionary, Hawtin is responsible for the popularization of techno music, as well as the development of tech tools used by contemporary leading DJ superstars, and has, together with the company “Allen & Heath”, recently created a new type of mixer which many believe will cause yet another revolution on the DJ scene.

Headlining on of the biggest electronic stages – Daley Padley, better known as Hot Since 82, won the hearts of the underground club scene with his debut release for “Noir Music”, with Mixmag Magazine describing his progression in the house scene as „meteoric”. Jackmaster, an unbelievably talented Scottish house producer, took the global scene by storm, and positioned himself as one of the leading DJs on a truly competitive scene, surpassing on Resident Advisor’s top list some of the biggest stars of all time. The Scottish master, whose name is inspired by the “jacking” school of Chicago-style house sound, will bring to the mts Dance Arena a colorful set, containing everything from forgotten classics to the latest club hits.mts Dance Arena’s international lineup is almost completed, with some more surprises around the corner, for its greatest edition yet! From 7 to 10 July, The Fortress will feature some of the best DJ sets by world leaders of the electronic scene: Dave Clarke, Dimitri Vegas&Like Mike, Disciples, Feder, Hernan Cattaneo b2b Henry Saiz, Hot Since 82, Jackmaster, James Zabiela, MANT, Marco Carola, Mind Against, Nicky Romero, Nina Kraviz, Richie Hawtin, Robin Shulz, Sam Feldt and Solomun. 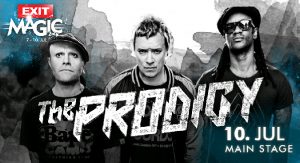 The most influental electronic band in the world, The Prodigy, will perform at their favorite EXIT Festival on Sunday, 10 July! Liam, Keith and Maxim personally addressed the audience: “Exit Warriors, you wanted us and we’re coming! We are gathering at the Fortress, so be there! See you all! Peace!”

One of the most influential electronic bands in the world, The Prodigy, will perform at EXIT Festival on Sunday, 10 July! After the urgent poll to bring one of the most popular bands in the world to Serbia this summer, in which no less than 92% out of 25,000 people said “Yes” loud and clear, reached them, the band decided to brake deadlock and added a fourth consecutive tour date during the second week of July, and allowing them to perform, in their own words, on their favorite festival! Liam, Keith and Maxim personally addressed the audience: “Exit Warriors, you wanted us and we’re coming! We are gathering at the Fortress, so be there! See you all! Peace“

THE PRODIGY – See you at EXIT:

After 25 years, The Prodigy, together with their last studio album “The Day is My Enemy”, found themselves for the sixth consecutive time in first place of UK’s top selling albums chart, an accomplishment achieved by no other band, except the Beatles. During their last tour, The Prodigy performed on almost every great festival from Australia to America, including stadiums, arenas, and the largest concert venues from Japan to Argentina. Tireless, they visited over 30 countries. They still have 15 countries left until the end of their tour and on 10 July Serbia will be one of them! 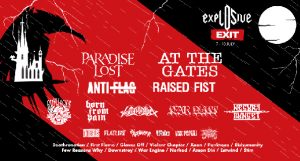 New line-up additions are announced for one of the most loved stages at EXIT festival, extreme stage for extreme people, the place most furious hardcore, metal, and punk bands from around the world call home, Explosive Stage! The explosive army will be lead by the controversial punkers Anti-Flag, as well as one of the most powerful Swedish hardcore bands, Raised Fist. Metal giants, doom/gothic sound pioneers Paradise Lost will be headlining the stage on the third day, whereas the major spot for the final day of the festival is reserved for the pioneers of the Gothenburg metal scene, At The Gates. Explosive Stage will also be the gathering place of piledriving riffs brought by The Rumjacks, Born From Pain, Toxic Holocaust, Sear Bliss, Negura Bunget, and many more! The army flying the Rock@EXIT flag is now even stronger, including the previously announced The Vaccines, Bastille, Cock Sparrer, The Black Heart Rebellion, Tuber, Kensington, and many others!

Exclusive Group Offer for EXIT Adventure tickets!
For a limited time we are giving away an exclusive group deal for EXIT Festival. If you and your friends buy 4 tickets then you’ll get a 5th for free and camping passes for your whole group! To get the offer all you have to do is fill out the forms here:
ExitFestivalGroups | ExitAdventureGroups

Promo Tickets to Exit Festival are available at www.exitfest.org/en/tickets. You can save up to 60% from the final ticket price in July. Accommodation and travel arrangements can be found at Exit’s official tourist agency, ExitTrip’s official website here www.exittrip.org/en.