Every year the most prestigious awards of the European festival scene are handed out at Eurosonic Noorderslag in Groningen. Sziget Festival was shortlisted in multiple categories and this time it earned the very prestigious title: „Artists’ Favourite Festival“ in Europe. Sziget Festival, celebrating its 25th edition this year, received multiple awards in the previous years and this new award is also a great feedback and motivation to continue on road of continuous success. 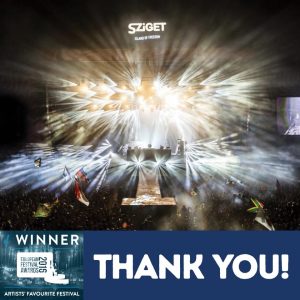 Main organizer and founder, Károly Gerendai, said the followings after the award ceremony: “Earlier the festival industry and the audience were the ones who voted for us, while now the international artists. I am very proud that Sziget has won all the categories it has ever been shortlisted in. Although we are very happy, this is also a huge responsibility as we have to keep up this confidence. Fortunately our current trends show that the trust of the audience, our Szitizens, is continuous and now it’s a great feedback that our international artists love our festival as well. The audience of Sziget is very colorful, and they are not only interested in the concerts, but arrive to the Island of Freedom to experience other exciting programs too! So, the artists do not only meet their own fans, but a much bigger music-loving crowd.“

Events of Sziget Cultural Management were nominated in various categories. Sziget was not only shortlisted in the Artists’ Favourite category, but was also in the competition for the “Best Major Festival” award, while B.My.Lake was shortlisted in the category of “Best Small Festival”.

In addition, Dan Panaitescu, long-time colleague of the Sziget crew, who tragically passed away last year has received the “Lifetime Achievement” award. The award was handed over to Károly Gerendai and Dan’s life partner. “We are very proud and at the same time very sad to receive this award for the work of Dan. However it is great to see how much the international community respected his work and how much they liked him. When everyone is standing with tears in their eyes…these are the times when you realize what a lost it is, that he is no longer with us.” commented Károly.

Sziget Cultural Management has received multiple awards in the past few years. Sziget Festival received the award for Best Major European Festival two times and also the Best European Line-up award last year. Both Telekom VOLT Festival and Balaton Sound was awarded as the Best Medium-sized European festival in the past and B.My.Lake started its award chain with the award for “Best New Festival”.