SZIGET FESTIVAL 2018 BRINGS TOGETHER OVER 565.000 PEOPLE FOR A LOVE REVOLUTION 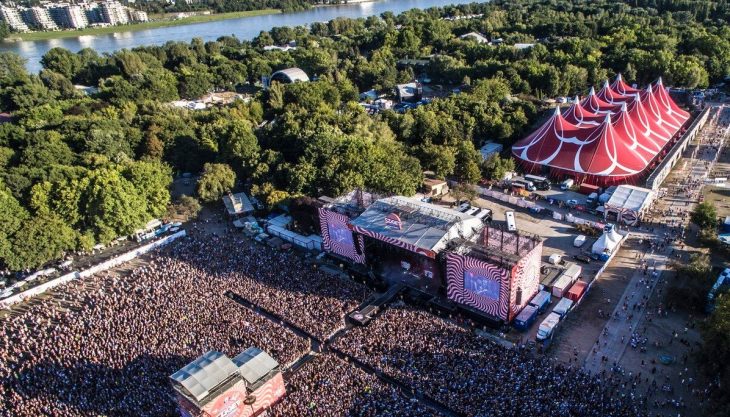 SZIGET FESTIVAL 2018 BRINGS TOGETHER OVER 565.000 PEOPLE FOR A LOVE REVOLUTION

Sziget, Europe’s most diverse festival and the fifth biggest in the world, turned 26 this year. The seven-day festival saw headline performances from the world’s biggest acts including Kendrick Lamar, Gorillaz, Lana Del Rey, Mumford & Sons, Dua Lipa, Kygo and Arctic Monkeys. Over 1000 artists and performers from the world over took to Óbuda Island including Stormzy, Shame, Shawn Mendes, Goo Goo Dolls, Slaves and many more. More than just its headliners, Sziget brought together a programme of world music, theatre, cabaret, installations, performances and art, with Szitizens flocking from over 100 nations to experience the „Island of Freedom“.

Tamás Kádár (CEO) : “Sziget is a truly unique global festival. We are so proud to have seen 565,000 people from all over the world join us here in the heart of Budapest. An international celebration of the arts, artists from over 63 different countries came to perform over 1000 programmes in seven days. The DNA of the festival, openness, love and respect, could be found in every stage, performance and Szitizen, and we will continue to lead the way with our love revolution.”

After cooling off in the Danube on Sziget’s very own beach, festival goers saw in the first night with a headline performance from the King, Kendrick Lamar. Also smashing the main stage on the first night was Stormzy, who brought all the charisma he’s known and loved for to his performance and had fans going crazy. Elsewhere rap-rock enthusiasts were out in full force on The Tribute Stage as Rage Against The Machine and Limp Bizkit tribute acts brought the energy to the island.

Thursday saw Gorillaz take the reins. Mixing the old classics with their new material, Damon Albarn led the charge backed up by a full choir, adding a whole new element to their songs. Elsewhere Seasick Steve and Cigarettes After Sex treated the crowds to their own blends of DIY blues and ambient pop respectively. Away from the main stage, revellers also delighted in the Cirque du Sziget and Magic Mirror stage, where FAMEfatale put on an incredible performance each evening amongst comedy and film screenings.

Shame welcomed in the weekend early with a mid-afternoon set on the Friday, stirring up the crowd with their snarly post-punk sound and unparalleled energy onstage. The Kooks and JP Cooper both also played stand out sets, their catchy pop bangers delighting the international fans. The all-American beauty queen, Lana Del Rey finished things off on the main stage, descending into the crowd whilst singing her swooning vocals.

The Kooks thanked the festival and fans: “Sziget was a wild time. Thank you for making it so!”

Saturday’s highlight was a monumental headline set from Mumford & Sons, a passionate performance of their biggest records and three brand new songs for the crowd.

Mumford & Sons shared an emotional post on Instagram following their performance: “Waking up from last night – it was like a dream. Thank you @szigetofficial Thank you to all who came to share that moment with us. We love what we do and are so grateful.”

Bastille played an absorbing set beforehand, whilst Everything Everything brought in thousands to the Mastercard A38 stage. Sofi Tukker also performed, their ’90s house-inspired jungle pop turning the tent into one huge dancefloor. Szitizens not ready for the party to end found their way to the porta-party, a not-so-secret hidden stage inside a portaloo that carried on until dawn.

British bands reigned supreme on Sunday, with Slaves and Wolf Alice both drawing huge crowds to the A38 stage with their sweaty, unrelenting punk attitude. Liam Gallagher played a set of non-stop hits, bringing all the Mancunian swagger and stage presence. King Gizzard & The Lizard Wizard provided a welcome dose of psychedelic rock, whilst Dua Lipa proved why she’s the biggest pop star on the planet with a spellbinding headline set, ending with her punchy hit ‘New Rules’. Fans who hadn’t lost their voice singing along to Dua’s infectious pop bangers found their way to The Tribute Stage, where an ABBA tribute act had the crowd of Super Troupers dancing till the early hours.

Dua Lipa on headlining Sziget: “My first ever major festival headline show. What an absolute dream. I don’t know how we got here so fast but I never wanna leave. Love you all so much for last night… life is pretty crazy”

Shawn Mendes drew thousands of adoring fans to the main stage on Monday afternoon. He captured the night in a post to Instagram: “My heart exploded tonight! Thank you Sziget”

Revellers found exactly what they’d been looking for during Tom Grennan’s brilliant set, whilst New York rockers Goo Goo Dolls injected a whole load of energy into the day. Little Dragon and Nick Murphy (FKA Chet Faker) both hypnotised crowds with their trip-hop vibes, and Kygo brought a mesmerising show of visuals and euphoric dance tunes to the masses that lit up the sky. Elsewhere on site, Szitizens discovered spectacular installations, colourful sculptures, unique art projects and more themed around the theme of ‚Love Revolution‘.

Blossoms kicked the final day off, their catchy alt-rock hits getting the crowd geared up for a spectacular headline set from Arctic Monkeys who proved that they’re still the best rock band in the world. Lewis Capaldi and Nothing But Thieves played earlier in the day, showcasing two of the best vocalists in current music. The party didn’t stop there, with elrow putting on the mother of all closing parties with their immersive, ingenious designs and amazing music selection.

Sziget this year has improved its commitment to reducing environmental impact. With a reusable cup system to reduce rubbish on site, eco-camping, recycling centres and it’s ‘Don’t Suck’ anti-plastic straw programme, the festival’s eco-footprint has been dramatically reduced and their ultimate goal of totally sustainable development is more of a reality than ever.

Sziget returns in 2019. For more details on Sziget head to szigetfestival.com