Sónar 2018 has offered 150 musical performances distributed across 10 stages (6 at Sónar by Day and 4 at Sónar by Night), presenting 230 activities and projects at Sónar+D, with more than 500 speakers and exhibitors.

The festival has brought together 64,000 people at Sónar by Day and 62,000 at Sónar by Night, with an audience comprised of 54% national and 46% international.

To these figures we should add more than 10,000 attendees expected to visit the two days of Maker Faire, the maker technology event located in the Pavelló Italià de Fira Montjuïc and the CaixaForum on Saturday 16 and Sunday 17 June, which forms part of the associated activities of Sónar and Sónar+D. The event is open to the general public and entry is free. 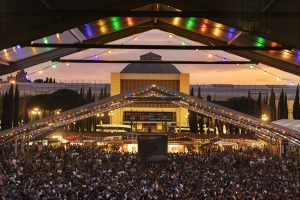 Sónar 2018 has celebrated its 25th anniversary in style, with numerous shows and performances from top-level artists: some performing live for the first time at the festival, such as Gorillaz or Rosalía, playing new and unreleased songs, as well as Thom Yorke on Saturday night at SonarClub. Others have returned to the festival with special anniversary shows, including Laurent Garnier’s set on Thursday, the remarkable Niño de Elche and Israel Galván show debuting at the festival, and the Richie Hawtin show, CLOSE, also taking place on Saturday night.

We have also relished in the inimitable DESPACIO experience and superb artistic moments in performances from the likes of Kode9 & Yoji Morimoto, Yung Lean, the Neapolitan sensation Liberato, Sophie, Sinjin Hawke & Zora Jones and Rainforest Spiritual Enslavement; and the extraordinary response for emerging artists from the national scene, in particular the urban and hybrid rhythms of trap artists such as Rels B, Nathy Peluso, Mueveloreina, Pedro Ladroga or Putochinomaricón, many of them starring on the SonarXS stage.

In addition to all the concerts and performances held during the three days of the festival, we should also mention that this year Sónar has presented the exhibition „NO Flyers NO Posters“, showcasing 25 years of the Sónar image, at the Center d’Art Tecla Sala del Hospitalet (open until June 23); the installation „Chiasm“ by Edwin Van der Heide in the Ajuntament de Barcelona; the concert of the Barcelona Symphony and Catalan National Orchestra performing „In C“ by Terry Riley at L’Auditori; and, of course, the festival’s closing concert on Sunday by Alva Noto and Ryuichi Sakamoto at the Teatre Grec.

Sónar+D grows in quality and quantity

Sónar+D, Sónar’s creativity and technology congress, has welcomed close to 6,000 accredited professionals from 61 countries, surpassing last year’s participation numbers by 10%. The 27 scheduled conferences had nearly 4,000 attendees. The workshops, 21 in total, were 100% filled, bringing together 525 people, and interactions managed by the congress app have exceeded 160,000.

Sónar+D has given voice to creators, artists, entrepreneurs, investors, scientists, code designers and other multiple innovators in order to share and decipher the challenges and major issues faced in cultural, social and economic news: artificial intelligence, virtual and augmented reality, the blockchain, the new Internet and big data. Sonar+D re-establishes itself as a space that offers unique opportunities for knowledge, inspiration and networking between different communities and creative and productive sectors.

Among this year’s noteworthy projects are softwares related to education and learning, with the help of artificial intelligence, wearables or apps that allow users to enjoy music or create it through sight and touch; tools to develop narratives for virtual reality and audio and video in 360; the creation of nanosatellites and headphones that adapt to the way listeners perceive sound.

At the conferences, the future has been a transversal line throughout, both from the point of view of the interaction between human and artificial intelligence, as well as the relationships between creators and users. Likewise, space research and its connections with the world of creativity have also played prominent roles in this year’s proposals.

Sónar+D gives voice to creators, artists, entrepreneurs, investors, scientists, code designers and other innovation agents with the aim of sharing and deciphering the challenges of the great issues of the present. In its 6th edition, Sonar+D is consolidated as a space that offers unique opportunities for knowledge, inspiration and networking between different communities and creative sectors. Here you will find the best moments of #sonarD2018.