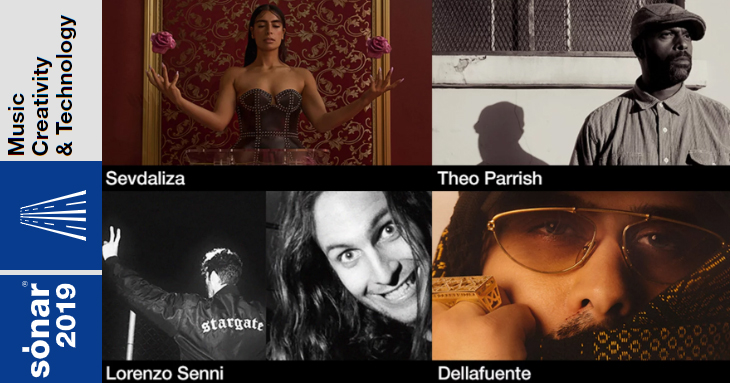 This year the SonarDôme stage presented by Red Bull at Sónar by Day is led by three artists from the highest echelons of electronic music.

On Thursday, Iranian-born singer Sevdaliza, who has been a permanent upward trajectory since her first visit to Sónar in 2016, will present her extraordinary blend of avant-garde pop and r&b with a self-directed show, “The Great Hope Design”. The show, which features elements of theatre and choreography, was developed for the Red Bull Music Festival in Berlin in 2018.

On Friday, the great Lorenzo Senni, a key figure in experimental electronica and the neo-trance, will perform with his reborn band Stargate, presenting a new show of futuristic synth music that falls between the digital and the organic. New material for the show was created in Red Bull’s traveling studio in Matera, Italy.

And on Saturday, the extraordinary Detroit dj and producer Theo Parrish will offer a special 3-hourset to close this year’s SonarDôme programme, replete with hidden jewels and unorthodox bangers ranging from funk to house, garage and techno.

In addition to them, SonarDôme presented by Red Bull will feature young up and coming artists and projects that have already taken their first decisive steps on the international circuit.

Once again the national scene will be well represented with five of the figures that are shaping the present sound of Spanish popular music: the acclaimed and fantastic andalusian MC Dellafuente, one of the stars of national urban scene; the beatmaker and visual director Dano; and the three national participants of Red Bull Music Academy Berlin: Ylia (playing a solo live set for the first time), the emerging Barcelona producer Shelly and Gallicia’s Nistra, the electronic alter ego of Novedades Carminha guitarist Anxo Ferreira.

The programme is rounded out by eleven other emerging artists who have recently passed through the classrooms and studios of Red Bull Music Academy and who represent the vanguard of music: Sneaks (post-punk and r&b from New York), Anger (synth-pop and future beats from Austria), FAKETHIAS (grime and sonic juxtapositions from Norway), J Colleran (treated pianos and soundscapes from Ireland), Katarzia (avant-garde pop and advanced from the Czech Republic), YakamotoKotzuga (IDM and instrumental hip hop from Italy), Anna Vs June (folktronica and microtonal singing from Greece), Camille Mandoki (vocal avant-pop from Mexico), Milan W. (ambient and club music mutants from Belgium) and vōx (vocally innovative r&b from California).

In addition to the shows at SonarDôme, SonarComplex rounds out its program with the addition of two performances: Push 1 stop & Wiklow with Membrane, an “algorithmic performance for transparent materials” which represents an alternative form of projection art and an exploration of tangible digitalism; and the prepared-piano meets electronica of German pioneer Hauschka, introducing his new album which will consist of melodic solo piano works, and will be released in early 2019.

Check the complete programme and the line-up by days at www.sonar.es