The festival’s third edition returns to Parc del Fòrum next August 11 and 12.

On August 11 & 12, DGTL Barcelona will alight once again at Parc del Fòrum. For its third edition, there will be over 60 artists spread over four stages. The first announcements for this year are: Solomun, Jeff Mills, Recondite [live] and Steffi b2b Prosumer. 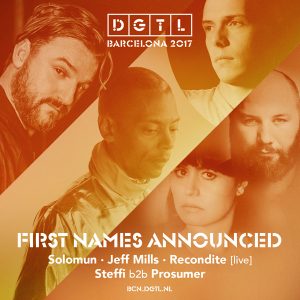 Diynamic Records’ captain Solomun, and Detroit based techno veteran Jeff Mills both debut on DGTL, whilst Recondite has proved to be a star on DGTL Amsterdam’s festivals in 2015 and 2016. The owner of Plangent Records will carry out one of his reputed lives, which will take the crowd on a journey through sombre places and melancholy.

The unusual tandem formed by Steffi b2b Prosumer closes the first round of confirmations. On one hand, vision, passion and knowledge make Prosumer a guardian of house music history. On the other, Dutch-born Steffi is a key figure in the realms of contemporary electronic music and a respected producer and label owner.

DGTL Festival landed for the first time in Barcelona in 2015, after years of revolutionizing the Dutch electronic music scene. Its first edition gathered 20.000 people and 40 artists divided in three stages; whilst the second one, in 2016, drew 30.000 visitors in, who enjoyed the music of over 60 artists. All in the brand’s usual context of extravagant and futuristic art that’ll once again drown the Parc del Fòrum in a 100% industrial look & feel. 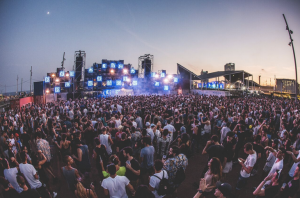 DGTL Barcelona combines music with art. Cultural and artistic projects play an important role in DGTL’s concept. The festival curates a wide variety of conceptual art performances and installations to engage the visitors. All with respect for home base and for the planet. DGTL is one of the most sustainable festivals of Europe. Always mindful of the environmental and social impact, DGTL is aiming to become worlds first circular festival.

Just like previous editions, DGTL Barcelona 2017 will host an official after party on both nights at Nitsa Club.