Snowbombing drops a huge second wave of acts set to perform in ‘the party capital of the Alps’, Mayrhofen, Austria, from 3-8 April 2017! Giggs, Blossoms, Slaves, De La Soul, Dixon, Shy FX, Grandmaster Flash, Amine Edge & Dance, Claude Vonstroke and many more acts join the line-up for the world’s No.1 festival on snow. With Chase & Status, MK, Gorgon City, Hot Since 82, Cassy, Eats Everything, Dusky and Monki already on the bill, along with Elrow presents: The Bronx Street Party, plus igloo raves, forest parties, luxurious spas, snow-yoga, rooftop hot tubs and 650km of unadulterated piste at one of the finest ski resorts in Europe, Snowbombing 2017 promises to be the biggest edition to date.

South London rapper Giggs is set to make his Snowbombing debut! From selling mixtapes on the streets of Peckham to becoming one of the most vital voices in the industry with standout tracks like „Talkin‘ da Hardest“ and “Lock Doh”, few artists have had such continuing impact on the UK hip hop scene.

Stockport five-piece Blossoms also join the bill. A band undoubtedly on the rise, having started the year on the prestigious BBC Sound Of 2016 new music list, before shooting straight to the top of the UK Albums Chart with their debut self-titled album, they are sure to provide one of the standout sets of the festival. Snowbombing also welcomes Noisenik duo Slaves. Since the release of their Mercury Prize nominated major-label debut album “Are you Satisfied” the punk duo have been making serious waves with their rapid-fire vocals, garage riffs and raucous live shows.

With a career spanning over 25 years, De La Soul has cemented itself as one of hip hop’s most innovative and influential groups. Aside from kickstarting a worldwide trend for baggy pants, tie-dye and multi-colored shirts, the original hip hop trio from New York City were an integral part of hip-hop culture’s global rise, inspiring a whole league of rap groups with their trademark sound. From classic cuts like „Me Myself and I“ and the irresistible hooks of „A Roller Skating Jam Named „Saturdays”, the Long Island trio are guaranteed to get the party started.

With Dixon at the helm, German label Innervisions has developed into one of dance music’s most celebrated institutions. As a DJ, producer, and co-creator of the legendary ‘Lost In A Moment’ parties, he continues to dominate the scene, regularly topping RA’s annual DJ poll, and is sure to deliver a memorable performance.

With all this plus previously announced acts including Chase & Status, Elrow presents: The Bronx Street Party, MK, Hot Since 82, Eats Everything, Dusky, Alan Fitzpatrick, Disciples, Skream, David Rodigan, Cassy, Monki, Solardo and Richy Ahmed, plus lots more still to be announced, this year’s line-up is starting to take some serious shape. 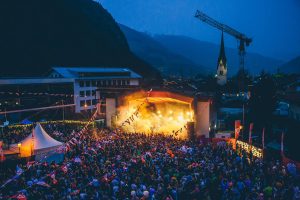 But it’s not just the world-class music line-up that’s earned Snowbombing the title of the world’s No.1 music festival on snow… Snowbombing boasts 650km of unadulterated piste, Europe’s steepest slope, the infamous Hinterlux Glacier, and an award-winning Snow Park. Adrenaline-junkies can soar to even greater heights and take the stunning views across the Zillertal Valley with a paragliding experience. Those looking to feel more grounded can join 90s fitness guru Mr. Motivator in his trademark fluoro Lycra for an energising and entertaining mountain-top workout, take a ski lesson with winter Olympics hero Eddie The Eagle, get their hustle on at the Dance-Off, or unwind and strike a pose with House of Voga and their music-led fusion of yoga and voguing that’s the perfect tonic after a long day on the slopes.

Snowbombing also excels in wellness, with a dazzling array of luxurious spas and relaxation activities. Take in the breathtaking mountain views from a roof-top hot tub or unwind in balmy Moroccan-themed pools, saunas and relaxation rooms after a long day on the slopes or an all-night party. With all this, plus igloo raves 6000ft above sea level, mountain top stages, enchanted forest parties, the infamous pool party, chair-lift speed dating,the Snolympics, Cable Car-aoke, Snow Limos, and Europe’s largest festival road trip, Snowbombing has redefined winters ports holidays and shown what the ultimate alpine music festival looks and sounds like. 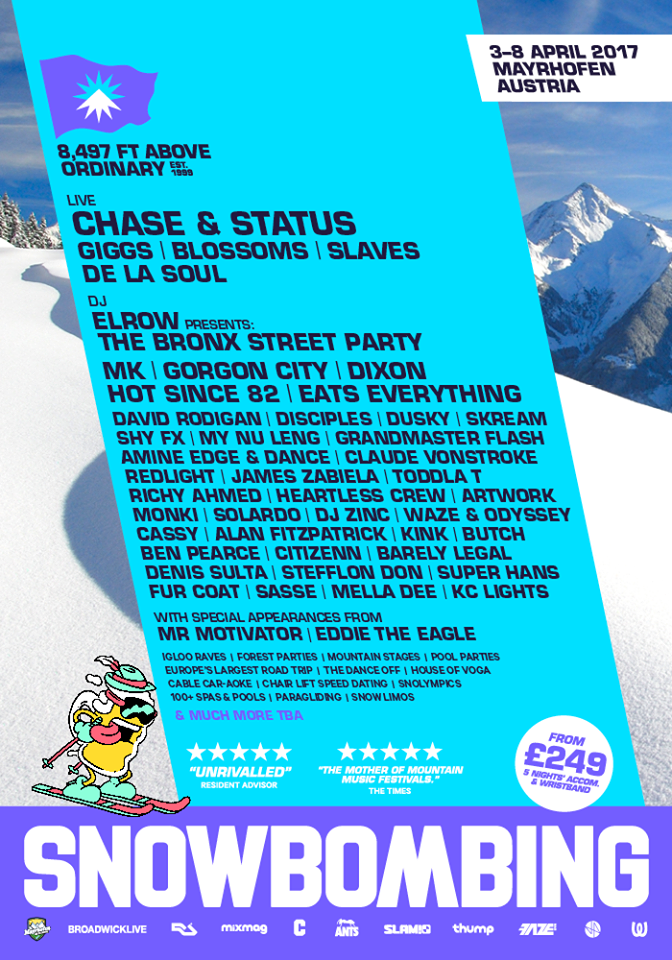 ABOUT SNOWBOMBING
Explain Snowbombing? Where to start… Mayrhofen, Austria, that’s where. Up a massive mountain 8,497 FT above ordinary! The finest ski resort in Europe, sprinkled with world class acts, insane venues (think Igloo rave, enchanted forest party, tennis club turned super club). Blue runs, black runs, beer runs. More? Add Eddie The Eagle, throw in a pool party, a celebrity butcher named ‘Hans‘, whack a luxury jacuzzi on every other rooftop, stand back and survey the majesty. If it’s good enough for Mr. Motivator, it’s good enough for you. As Fatboy Slim one eloquently put it: “there’s no shared experience in the world as mental as this”.