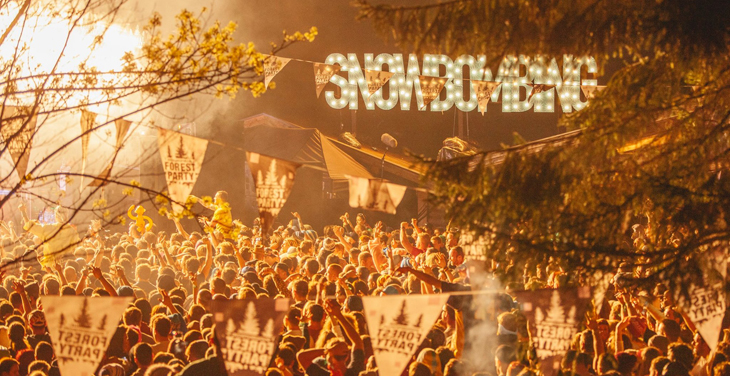 THE WORLD’S NO.1 MUSIC FESTIVAL ON SNOW UNVEILS BRAND NEW VENUE IN ASSOCIATION WITH THREE!
Introducing the haus that House built, THREE HAUS, a brand new venue for Snowbombing 2016.

Developed in partnership with Three, THREE HAUS is a take-over of the Berghof Garden, a beautiful traditional Tyrolean tavern in the chocolate box town of Mayrhofen.

A living embodiment of all the very best of Snowbombing, THREE HAUS promises the ultimate party atmosphere, featuring some of the most gifted selectors to grace the globe, along with residents DiscoFunk and an impressive selection of über secret special guests.

Ensuring fiesta proceedings get off to a suitably raucous start at THREE HAUS on the opening night, Sunday 3rd April, are regular Mayrhofen mischief makers The Cuban Brothers!

UK producer and snowbombing favourite Maxxi Soundsystem will be digging deep into his arsenal of deep disco-influenced house cuts on Monday 4th April, joined on the behind the turntables by a surprise guest to be revealed on the night!

Mobilee Records boss Anja Schneider celebrates her birthday on Wednesday 6th April, performing alongside a stellar selection of her favourite DJs and every Snowbomber is invited! Joining Anja on the decks will be Ants resident Andrea Oliva, rising star Citizenn, Moodmusic’s Sasse and Snowbombing’s very own Marc Roberts.

If that wasn’t enough, on Friday 8th April, KISS DJs Rickie & Melvin and Dixon Brothers will take things back to the old skool spinning classic garage, house, R&B and Hip Hop for a night of KISSTORY.

As well as the huge names already announced, some very special guest DJs will also be making appearances throughout the week, the details of which will be revealed exclusively to Snowbombers during the festival!

Venue hosts DiscoFunk will also perform throughout week. Once a Kentish town basement party, DiscoFunk is now a fully fledged posse of party people that celebrates all walks of the disco spectrum. You can count on them to ensure maximum disco vibes until the very bitter end, when the final Three Haus send off will be a back to back closing set guaranteed to make you get your hustle on.

It’s not just the acclaimed music line up at Snowbombing’s latest hideaway to be excited about, happy hour is the order of the day, the drinks flow free (for the lucky ones) and new friendships are forged. Make it off the mountain and get in the mood for the best aprés ski in the Alps!

Pippa Whybourne, lead comms manager at Three said: “We are so excited to be partnering with Snowbombing on what is the most exciting venue at the festival. At Three, we’re all about using your phone abroad at no extra cost to make our customers feel at home. We are therefore looking forward to welcoming Snowbombers to ‘our hause’ so they can share their party pictures shamelessly.”

Tune in to the Snowbombing Podcast for exclusive Three Haus mixes by DiscoFunk! 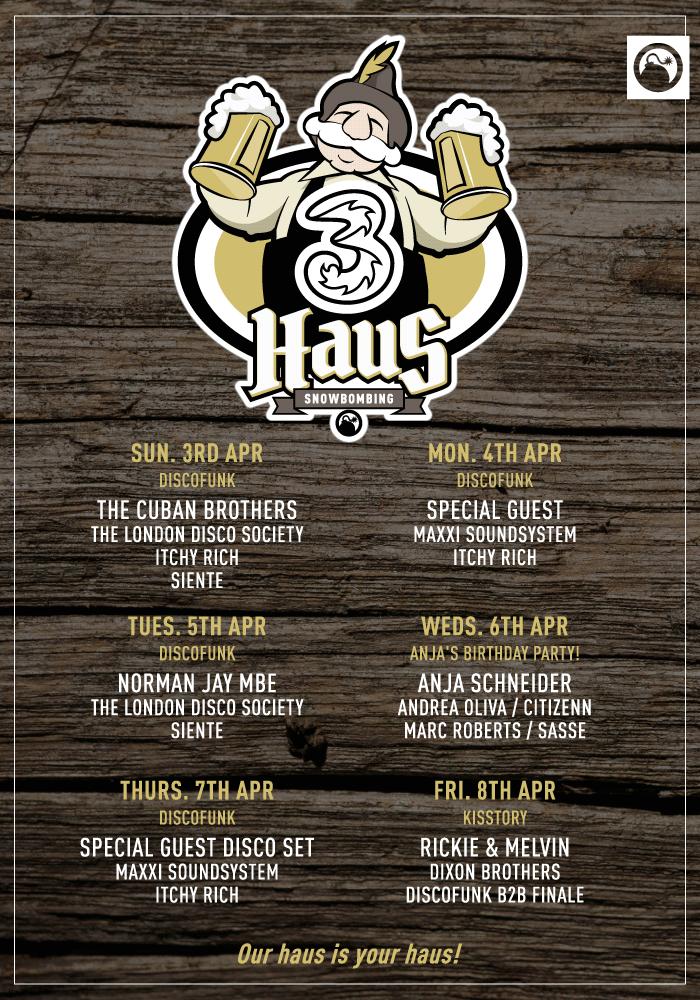 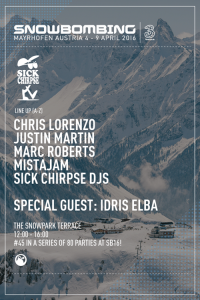 Sick Chirpse are gathering up the gang for an avalanche inducing party at the SB Board Park this April, as Justin Martin, MistaJam, Chris Lorenzo, Marc Roberts and VERY special guest Idris Elba are all gearing up for a b2b2b2b2b for one afternoon only… UNMISSABLE!

Snowbombing takes place from 4th – 9th April 2016, in the picturesque alpine town of Mayrhofen in Austria. Acts confirmed for 2016 include The Prodigy, Andy C, Bastille, Fatboy Slim, Jamie Jones, Jungle, Netsky, Sven Väth, Groove Armada, Oliver Heldens, Andhim, Marcel Dettmann and many, many more. If dancing against an unparalleled panoramic backdrop that other festivals could only dream of, partying with the world’s most groundbreaking live acts and DJs, relaxing in a luxury spa or just riding the fresh white powder appeals, then join us in Mayrhofen for SB16! Wristbands priced at £224 and packages starting from just £339 (+bf) for 5 nights‘ accommodation and a complimentary festival wristband are on sale now. Book your place by visiting www.snowbombing.com.