Famous fire-starters The Prodigy are set to light up the Forest Stage at Snowbombing 2016! Since bursting onto the scene in the early 90s with critically-acclaimed albums like Music For The Jilted Generation and The Fat Of The Land, the British three-piece of Liam Howlett, Keith Flint and Maxim Reality have topped the charts the world over, selling over 25 million records and scooping up a whole host of awards along the way. Recently voted the ‚Greatest Dance Act Of All Time‘ in a Mixmag readers poll, the celebrated live act continue to remain as popular and relevant as ever, with 2015 album The Day Is My Enemy debuting at No. 1 in the UK Albums Chart and sold-out arena shows around the globe. If their last two appearances at Snowbombing are anything to go by, we are in for a high octane, adrenaline-fueled performance like no other

London soul collective Jungle will make their Snowbombing debut, headlining the annual Street Party, which takes over the centre of Mayrhofen for Europe’s biggest fancy dress party The band, who released their Mercury-nominated debut Jungle in 2014 including standout tracks like ‘The Heat’, ‘Busy Earnin’ and ‘Platoon’, are guaranteed to deliver a memorable festival performance. Also confirmed for the Street Party is Superstylin duo Groove Armada! Over fifteen years Andy Cato and Tom Findlay have made their mark as one of the planet’s best-loved and biggest selling dance acts, with eight studio albums, countless hits and a slew of sold out headline performances, not to mention many a storming show at Snowbombing. Their most recent compilation album Little Black Book on Moda Black saw the pair return to their house roots and we can’t wait to see what they have in store as they make their triumphant return to the Mayrhofen mountains

The mighty Racket Club will once again play host to a world-class selection of acts, including debut Snowbombing performances from Netsky and Oliver Heldens Dutch dance sensation Heldens first signed to legendary dance music label Spinnin‘ Records when he was just 17 and has rapidly risen to become one of the most in-demand artists on the circuit. Belgian neighbor and Hospital Records mainstay, Netsky, is guaranteed to put on an incredible show with his uplifting dancefloor dynamics. Drum & Bass pioneer Andy C and 2015’s breakthrough DJ Hannah Wants, both firm favourites with regular ‘bombers, will also bring the beats to the Racket Club, along with much-anticipated DJ sets from Wilkinson, Ben Pearce and Bondax.

House and techno fans have much to look forward to as Snowbombing also welcomes Hot Since 82, Berghain resident Marcel Dettmann, Innervisions’ Henrik Schwarz and House maestro Kerri Chandler! And the electronic music offering doesn’t end there, as the notoriously talented Dutch production trio Noisia also star, along with man of the mountains James Zabiela who never fails to bring the heat to the dancefloor. With acts like Heidi, Bicep, Huxley, T Williams and Will Saul also confirmed and lots more still to be announced, this is shaping up to be one of the biggest line-ups to date.

With mountains as a perimeter fence, Snowbombing provides some of the most awe inspiring festival venues in the world; including a sky-high igloo perfect for a snowy rave, 6,000 feet above sea level, enchanted forest clearings complete with lasers, medieval barns and cosy Alpine après ski bars. With many more acts still to be announced, Snowbombing 2016 is set to be the biggest to date, showcasing groundbreaking music acts with iconic legends. Packages start from just £249 (+bf) for 5 nights‘ accommodation and festival wristband. Book your place at Snowbombing 2016 by visiting www.snowbombing.com and join us for what’s set to be the most incredible year yet!

For a taste of the action take a look at the highlights from last year:

ABOUT SNOWBOMBING
A festival filled with fresh air, blue skies, black runs and white-hot parties… A week-long whirlwind of world class DJs and bands, in the idyllic alpine setting of Mayrhofen, Austria. Days are spent skiing, boarding, enjoying music on mountain top stages or relaxing in the spa of a luxury hotel. Nights deliver cutting edge performances in unique venues, from a sky-high igloo, to an enchanted forest clearing. Regarded by many as… The Greatest Show on Snow. Mystical. Musical. Without Equal… 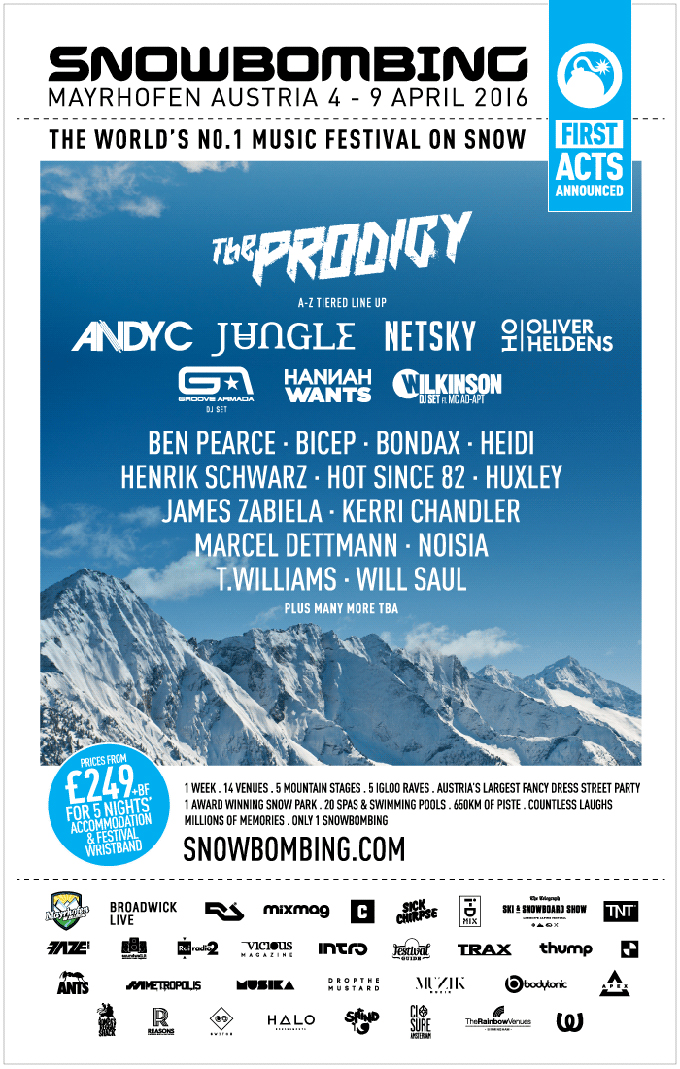