Mexican filmmaker Taboada, the muses of horror cinema Rosanna Yanni and Me Me Lai, legendary filmmaker Ibáñez Serrador and his factory, the sadly missed figure of Juan Piquer Simón and the worldwide premiere of the documentary on Soledad Miranda are just a few of the essential proposals in the lineup of a Brigadoon that will be diverse in its forms but authentic, once again, in its contents of radical and cult genre productions.

Included among the programmed fiction feature lengths are films like Guinea pig: Bouquet of Guts & Gore, directed by Stephen Biro, a new reconstruction of the vicious episode Flower of Flesh & Blood, by Hideshi Hino, from the mythical saga Guinea Pig; Female Werewolf, an approach to the universe of Jesús Franco, directed by the publisher of Fangoria magazine, Chris Alexander; Darkside Witches, by Gerard Diefenthal, starring mythical actress Barbara Bouchet, and Le scaphandrier (Death Dive), a film that could be a perfect remake of John Carpenter’s film The Fog, directed by Alain Vézina. In addition, legendary actress will be presenting Eaten Alive! The Rise and Fall of the Italian Cannibal Film, directed by Calum Waddell.

These films have been added to the previously announced Villa Nabila, by Syafiq Yusof; The Entity, by Eduardo Schuldt; O diablo mora aquí, by Rodrigo Gasparini and Dante Vescio, and Me and my Mates vs. the Zombies Apocalypse, byDeclan Shrubb.

Once again this year, Brigadoon offers a painstakingly chosen selection of documentaries in its lineup. This year´s Festival will be the stage for the worldwide première of Soledad Miranda: una flor en el desierto, by Pepe Flores & Paco Millán, a documentary revolving around the deceased actress from Seville, and The Simon’s Jigsaw: un viaje al universo de Juan Piquer Simón, by Luís Esquinas, about the also deceased filmmaker and producer from Valencia, Juan Piquer Simón.

Brigadoon 2015 will also be screening the episodes El cumpleaños, El doble, El regreso, El último reloj and El caso del señor Valdemar from the legendary TV series Historias para no dormir, unreleased for the moment in DVD. The Ibáñez Serrador factory is in the preproduction stage of a new season of the popular horror series created by the legendary Narciso Chicho Ibáñez Serrador. In this new phase, Prointel Producciones, directed by his son, Alejandro Ibáñez, under the supervision and wise advise of his father and teacher, proposes new stories and updated versions of some of the series’ most terrifying episodes. The creative crew will be made up of renowned directors and up and coming talents in Spanish genre cinema. In addition to other entertainment projects the production company is also developing a d ocumentary film on the life of Narciso Ibáñez Serrador.

This year, the Nosferatu Award will go to Argentinean actress Rosanna Yanni, extremely prolific in the Spanish cinematic panorama throughout the decades of the sixties and seventies and the star of films directed by Amando de Ossorio or Jesús Franco. Brigadoon will be screening some of the films from her career like Count Dracula’s Great Love(1972), by Javier Aguirre or Kiss Me Monster (1968), by Jesús Franco. This way Brigadoon will be continuing with its efforts to support the great figures of fantastic and horror cinema made in Spain in past decades and, at the same time, reinforce the importance of women in horror cinema, a line that also pours over into other Festival sections.

Brigadoon will be releasing a collection of books with its own label. And it is kicking off with Taboada, a study of and homage to Mexican director Carlos Enrique Taboada, by several different authors. It will be published by Catalan publishing house Tyrannosaurus Books. In addition, Brigadoon will be screening Jirón, Christian Cueva’s debut film, revolving around this Mexican filmmaker. The documentary will be accompanied by a Taboada retrospective including the films Poison for the Fairies (1984) and Más negro que la noche (1975), among others. 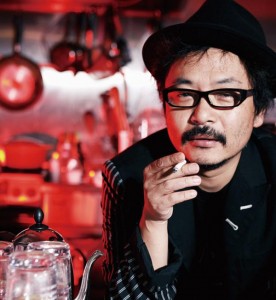 Sion Sono will receive the Time Machine Award at Sitges 2015
The prolific Japanese director will be presenting the films Tag, Love & Peace and The Virgin Psychics at the Festival

Japanese cinema has one of its main present-day exponents in Sion Sono. Internationally famous and award-winning, this filmmaker and poet will be visiting the 48th Sitges – International Fantastic Film Festival of Catalonia to pick up the Time Machine lifetime achievement award, and present three of his latest films: Tag, Love & Peace and The Virgin Psychics.

Sion Sono (Toyokawa, 1961) has become one of the essential names in modern Asian cinema, an irreverent cult director who’s managed to create a very personal film language throughout his career, where youth, death or religion appear as recurring obsessions. His success began with the stunning Suicide Club (2002) and was consolidated with the multi award winning Love Exposure (2008), an epic film with a runtime of four hours that was a radical critique of youth values. Other titles include Why Don’t You Play in Hell? (2013) and Tokyo Tribe (2014). With his unlimited creativity and in better shape than ever, Sion Sono plans to release a total of five films in 2015.

This fascinating director is a regular at the Festival, where he presented Cold Fish, winner of the Casa Àsia Award, in 2010, Guilty of Romance and Himizu in 2011 and Bad Film in 2013. Two of his latest madcap creations, Tag and Love & Peace, recently won the award for best feature film and actress, and the audience award, respectively, at the Fantasia Festival in Montreal. 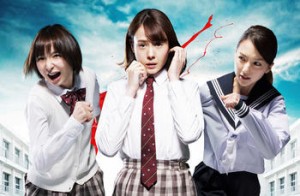 Tag is a bloody, explosive and funny film where a group of high school girls face a shapeless threat that brutally attacks them. It’s an adaptation of the novel Riaru Onigokko, by Yusuke Yamada. Love & Peace, on the other hand, connects two storylines that begin with a dull, boring office worker, a wannabe musical star who, on a whim, decides to flush his pet turtle down the toilet. And in contrast to the psycho-supernatural horror in Tag and the socio-fantastic pyro-musical Love & Peace, comes The Virgin Psychics, an erotic comedy and youth fantasy about an impossible sexual revolution in the heart of Japan. Three proposals with Sion Sono’s inimitable signature that promise large doses of delusions at Sitges 2015. 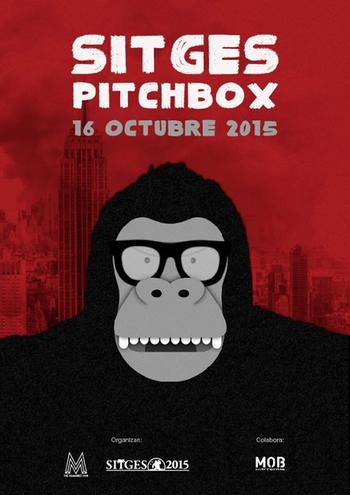 Sitges 2015 and Filmarket Hub announce Sitges Pitchbox, a pitching event that will be taking place at the Festival.
Sitges Pitchbox will be giving genre feature film projects a chance to be pitched to producers on 16 October.

A few days ago, the 48th Sitges – International Fantastic Film Festival of Catalonia presented some of the films that will be a part of its lineup. But with the Festival starting barely two months from now, the new developments don’t stop there. Another outstanding feature this year is its collaboration with the online platform Filmarket Hub, which will be in charge of organizing a special edition of their pitching event, Pitchbox, during the Festival.

Sitges Pitchbox will be offering screenwriters, directors and producers a chance make a sales pitch of their horror, science fiction of fantastic projects to production and distribution companies attending the Festival, plus others that will be invited especially for the occasion.

The pitching will take place on Friday, 16 October, in the Miramar Room, and 7 different projects will be selected out of all of the ones presented. Those interested in registering their project can do so through a special call that will be opening up on Monday 10 August and which will be available until 15 September. Registration is free and must be done through Filmarket Hub.

In addition, and as a special gift, the projects will remain onFilmbox, Filmarket Hub’s online screenplay and coproduction marketplace, for free until 31 October for all participating production companies to see.

But the collaboration between Sitges 2015 and Filmarket Hub isn’t just limited to this pitching event. Those people withprofessional credentials for the Festival, will have a chance to connect with all the other pass holders through the Filmarket Hub social network. They will be able to find out who is attending and which days to be able to organize work meetings.

The online platform has also highlighted the importance of this agreement: “Sitges is one of the most important festivals in Spain and in Europe. It is undoubtedly the perfect setting for helping screenwriters and directors to be able to show off their talent and their genre projects to production companies and distribution companies”.

Filmarket Hub is an online platform that focuses on making film projects come to life through a social network of professionals and an online marketplace for screenplays and coproduction for feature films, documentaries, and TV series in the development stage. It establishes a global network that connects potential investors from different sectors with producers, creators and other industry professionals. This project is born with the clear goal of playing an important role in the international marketplace. Filmarket Hub allows creatives and producers to expand their network of contacts in the audiovisual sector, promote their careers quickly and easily and make their projects a reality.

Santiago Segura will be premiering the short ‚Nivel 7‘, produced by Gas Natural Fenosa
Nivel 7, a production full of tension, emotion, humor and even a crime, is a part of Cinergía, a Gas Natural Fenosa initiative to raise public awareness about energy efficiency

Gas Natural Fenosa will be present once again this year at the Sitges – International Fantastic Film Festival of Catalonia, taking place from 9 to 18 October. As a part of this film competition, the company will be premiering the short film Nivel 7, directed by actor and movie director Santiago Segura, and producedby the energy company in collaboration with El Terrat. 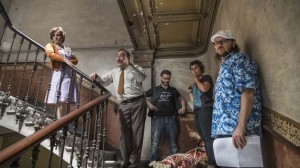 In addition, Gas Natural Fenosa signed a new agreement with the Sitges – International Fantastic Film Festival of Catalonia making it the Festival’s official sponsor for the forth year in a row. Sitges is the number one fantastic film festival in the world and one of the main film events in our country.

Santiago Segura’s short is a part of the second edition of Cinergía, a Gas Natural Fenosa initiative to bring energy efficiency closer to the general public through the Seventh Art and promote talent in Spain’s film industry.

The story begins with a surprise visit from the president of residents’ association, obsessed with responsible consumption, to a neighbor who, behind the facade of a discreet lady, hides a cruel squanderer of watts. Anabel Alonso, Enrique Villén andJoaquín Reyes are the actors in charge of bringing these characters to life in this production full of tension, emotion, racy jokes, zany dialogues and even a crime.

Along with Santiago Segura, the other short films for this year’s Cinergía are directed by Isabel Coixet, Paco León, and the young winner of the screenplay competition, Josep Pujol Bonet. The shorts all star prestigious, well-known actors likeCarmen Maura, Secun de la Rosa, Anabel Alonso or Silvia Abril, among others. These productions, which will premiere in Spain’s top film festivals, will also be reaching both movie theaters and the homes of thousands of Spaniards. Actually, last year’s Cinergía had 8 million views on TV and Internet.