POSITIVUS 2018 ANNOUNCE DATES AND NICK CAVE AND THE BAD SEEDS 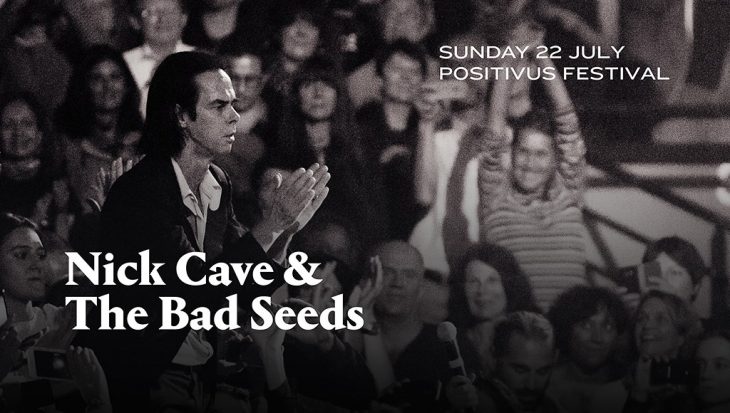 POSITIVUS 2018 ANNOUNCE DATES AND NICK CAVE AND THE BAD SEEDS

In the summer of 2018 Positivus Festival will return for the 12th time on 20, 21, and 22 July, filling the beautiful coastal venue in Salacgriva with more dazzling live shows from well-known and established stars, cutting edge emerging artists, a large number of Baltic acts and other surprises that are not to be missed.

Nick Cave and The Bad Seeds have been announced as the first headliners of the Positivus Festival 2018. The legendary songwriter, author and actor will perform together with his most acclaimed musical companions on the closing festival day on Sunday, July 22. One-day and two-day tickets are onsale now.

Triumph, the manifesto of rock and roll and the extraordinary answer to the incomprehensible are just a few of the epithets that music reviewers have chosen to describe the concerts of Nick Cave and The Bad Seeds that have delighted people not only during this year’s European tour, but throughout the band’s long and storied history. For almost 35 years, this unique band has been synonymous with dark and extravagant contemporary rock music that has won it a legion of fans all over the world. The Bad Seeds, which is founded on the ashes of Nick Cave’s previous band The Birthday Party, brings together cosmopolitan-minded visionaries who are ready to break any imagined boundaries of music to create original sound the like of which has never been heard before.

Ever since the release of their debut album From Her To Eternity back in 1984, Nick Cave and The Bad Seeds have sounded like no other musicians on Earth, which is as true today as ever before. While the Bad Seeds have allowed themselves all kinds of experiments, including absolutely dark and absurd “horror” rock, clear and naïve garage rock and even the temptation of punk rock, they have always kept their signature character, making the band instantly recognisable from the very first beats of their songs.

Every album by Nick Cave and The Bad Seeds has its own story, and the latest, Skeleton Tree, is no exception. It is full of sorrow and pain due to the fact that Cave’s teenage son Arthur died during its recording – one can only guess what emotions and dialogues with the universe are encoded in this record. However, Cave has left the tragedy in the past and, even at 60 years of age, is still in excellent shape on stage, as well as being incredibly open to listeners and not hiding his emotions, including his grief. Despite the sad background to this latest album, Cave’s performances are life- affirming. Apart from featuring the music from the new album, his concerts include songs that have proved to be timeless classic, drawn from iconic albums such as The Boatman’s Call, gothic Murder Ballads and other song compilations.

“From beauty that breaks your heart to poorly managed chaos – the band performs a surprisingly uplifting arena concert”, wrote The Guardian about Cave and the band’s appearance in the UK.

“This sell-out show… was surprisingly uplifting. Euphoric, even, at times. Far from cutting the sorrowful figure of an isolated man consumed by sadness, Cave took on the role of a quasi-religious leader, reaching out to hold hands with fans and ignite their emotions into a life-affirming fire of furious sound,” was the rapturous reaction of the British online newspaper The Independent, simultaneously giving Cave the title of the “gothic ringmaster”.

This year’s European and British concert tour is completely sold out, but it is already announced that in the next summer, Nick Cave and The Bad Seeds will tour in Northern Europe, including Positivus Festival in Latvia on July 22.

One-day and two-day tickets are also available for sale:
With the announcement of the first artist, Positivus Festival’s one-day and two-day tickets are also on sale. The ticket price for a one-day visit to the festival is 50 Euros, while for two days the price is 69 Euros. The price for a three-day visit to the festival remains unchanged – 79 euros without a tent and 87 euros with an access to the Tent city. The festival tickets can be purchased at the festival’s website www.positivusfestival.com/tickets, as well as at the Biļešu Serviss offices and at www.bilesuserviss.lv.

About Positivus:
Taking place in the picturesque coastal town of Salacgriva in Latvia,Positivus is the largest music and arts festival in the Baltic States, transporting chart-topping headliners, underground emerging talent and exciting art and dance stages to their unspoiled atmospheric coastal setting amid stunning woodland.

Festival goers can dip their toes in the baltic sea or take in the atmosphere in a hammock beneath the trees while enjoying a rich diversity of international chart toppers and underground emerging talent in this idyllic holiday location. Positivus also offers art and dance stages giving festival goers a variety of activities and stalls selling locally made designer clothing and accessories, giving festival goers plenty to see and do during the 3 day event.

Positivus was also recognised in the 2013, 2015, 2016, 2017 European Festival Awards being a finalist in the ‘Best Medium Sized Festival’ category and also shortlisted for ‘Best Festival Line Up’ in 2013.