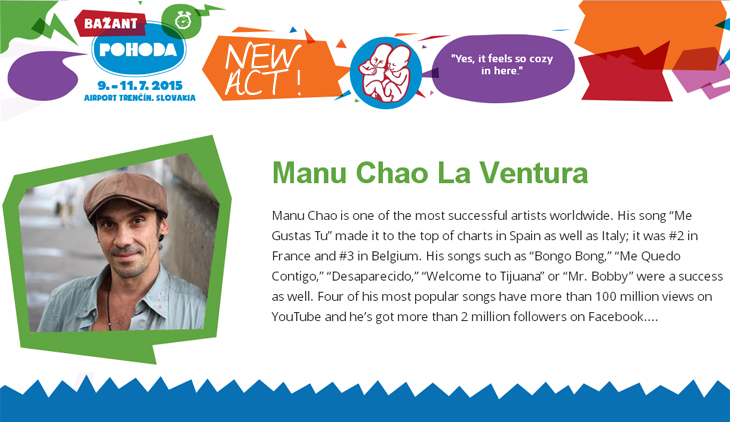 Beardyman became UK Beatbox Champion in age of 25 and was the first beatboxer to win the championship twice in a row. Genre-wise, his music is influenced by drum and bass, dubstep, breakbeat, trance, techno, hip-hop, but there are other influences that define his work, for example reggae or classical music. Beardyman’s music is created by his voice alone. With the use of electronic equipment, he creates a spectrum of known as well as unknown sounds.

Irie Révoltés is a nine-member assembly of Heidelberg diverse in genres and languages, too.. Their creative act embraces reggae, hip-hop, dancehall, ska, and punk. Apart from German, they also sing in French, English, and Spanish. The band was founded in 2000 and has since recorded four studio albums. In their songs, they stand out sharply against discrimination, sexism, chauvinism, and racism.

We remind that, from 31 March until 2 April, the festival Bažant Pohoda will once again bring Pohoda in clubs, this time it is going to be in Brezno, Banská Bystrica, and Brno. Our agenda offers the viewing of the film Pohoda 2014 and the discussion with the director Petra Všelichová and the founder of the festival Michal Kaščák. Also, one of the confirmed performers this year – the Serbian band Repetitor – will perform, and DJ Drappenmadchenfeller will take care of the afterparty.

A Pohoda Shop will be present on-site, where tickets to Bažant Pohoda 2015 will be available, as well as T-shirts, bags, badges, and other merchandise. For each purchased ticket to the festival, the buyer will receive a bonus from Pohoda Shop in the form of a T-shirt. We are looking forward to you in Breznoʼs club Bombura on 31 March, in Banska Bystricaʼs Záhrada on 1 April, and in Brnoʼs Kabinet Múz on 2 April.

Manu Chao is one of the most successful artists worldwide. His song Me gustas tu made it to the top of charts in Spain as well as Italy; it was #2 in France and #3 in Belgium. His songs such as “Bongo Bong,” “Me Quedo Contigo,” “Desaparecido,” “Welcome to Tijuana” or “Mr. Bobby” were a success as well. Four of his most popular songs have more than 100 million views on YouTube and he’s got more than 2 million followers on Facebook.

Peter Culshaw of The Telegraph contemplates the significance of Manu Chao in his article “10 reasons why Manu Chao is global pop’s most important star”. To pick a few important points: in South America, he plays to audiences in excess of 100,000. His albums Clandestino and Próxima Estación: Esperanza (“Next stop: hope”) sold more than six million copies in France alone. Manu writes politically-engaged protest songs. They aren’t dull: his humanity and lack of cynicism shine through. Even singing about tough themes, his aim is not to get the audience depressed but to entertain them. And he does a brilliant job, indeed.

Manu didn’t rise to fame thanks to a well-thought marketing. He doesn’t play the industry game. Chao never tours to promote his albums, never plans more than three months ahead. When he does play big shows in the US, he will often arrange smaller, unpublicized concerts to striking dockers, in prisons, or just in small bars. He still busks regularly in the streets of Barcelona.

While he doesn’t think of himself as a star, he helps others grow. Pohoda festival-goers are familiar with the duo Amadou and Mariam: it was Manu who discovered them and turned them into pop stars.

Linguistic portal languagemagazine.com even studies the way Manu Chao uses code-switching. The author of the study, Franny Brogan, notices an interesting fact about it: Chao’s code-switching cannot be thematically divided in a systematic way and it’s not obvious, in other words, used in situations such as: “Here is a word from another language I speak that rhymes with the text so I’m going to use it.” Manu establishes contact with people using their mother tongues. The song “Denia,” for example, uses Arabic in its anti-globalization message to the people of Algeria. Similarly, in the song “Welcome to Tijuana,” Chao describes the desperation and violence in the Mexico-U.S. border city. In this case, he uses a Spanish-dominant mixture of Spanish and English. In “Clandestino,” he describes the feeling of being like an illegal immigrant, whose destiny is to never fully belong, using his mother tongue.

Manu is a fascinating phenomenon not only because of his music but also because of the enthusiasm and overall approach to life. As a teenager, he hitch-hiked from France to Essex and went round the pubs trying to recruit a punk band. He hired a train to tour war-torn Colombia in 1992 with his band Manu Negra. Basically, Pohoda founder, Michal Kaščák, has been trying to book him for the festival from the start: “Manu Chao is a perfect fit for our festival. He’s a wonder, he plays amazing music, writes brilliant lyrics and his gigs are something worth being called an exceptional experience. We’ve been trying to book him since we had artists from abroad on the bill. Back in 2001, we traveled to Paris to see him. He then promised to come one day. And he promised it again last year during his visit in Trenčín prior to Pohoda start. We’re proud to have Manu Chao bring positive vibes to our airport. We’re going to have a field day with a concert like that!”

Manu Chao, accompanied again by Madjid on guitar, Philippe Teboul on drums and Gambeat on bass, as on previous projects such as Radio Bemba or Mano Negra, will present: Manu Chao La Ventura – rock quartet, performing most legendary, well known songs, as well as new ones, never recorded…