She has written songs for pop stars like Cher, Christina Aguilera, and Rihanna, until she finally had a breakthrough with her superhit “Lost on you” in 2016, which became the fourth most searched song in Shazam after the summer of 2016. The video and live versions have nearly 300 million views on YouTube, and they were played nearly 100 million times on Spotify. You can enjoy her typical whistling, catchy tunes, tambourine, ukulele, and unmistakable voice at Pohoda 2018. 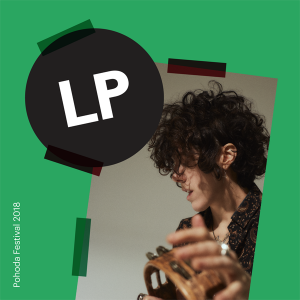 Laura Pergolizzi aka LP began as a street musician in New York, where she was discovered by David Lowery of the band Cracker at the end of the 90s. David was the producer of her debut album Heart Shaped Scar released in 2001. Despite being very talented, she had to wait for her greatest moments 15 more years. In June 2004, she launched her second album Suburban Sprawl & Alcohol that featured Linda Perry (the singer of 4 Non Blondes). A major success came after 2010, when LP wrote the song “Cheers (Drink to That)” for Rihanna, which Rihanna on her turn said was one of her favourite. Shortly afterwards, she wrote “Beautiful People” for Christina Aguilera. In 2012, her song “Into the Wild” was well received, and subsequently she released her EP Into the Wild: Live at EastWest Studios. It was followed by the third studio album “Forever for Now” in 2014. In September 2015, she released the song “Muddy Waters”which Netlflix featured in the closing scene of the season four finale of the series Orange Is The New Black. The real break in her career, however, came two months later with the song “Lost on you” that topped charts in 12 countries, including Slovakia and the Czech Republic. She has released Death ValleyEP in the summer 2016. At the end of the same year, she released her fourth album Lost on You and last year she followed up with the extended re-editions of the last two albums. Last yearʼs concert at the Prague club Roxy sold out in just five minutes. We are happy to be able to see her at Pohoda too.

Few projects manage to merge as many genres and artistic forms as GusGus. In the second half of the 90s, they showed that Icelandic scene is far from being about Björk only. Several successful artists (e.g. Emiliana Torrini) kicked off their career in this band. During two decades, they recorded ten albums to critical acclaim, including the latest two Mexico and Lies Are More Flexible. Biggi Veira described their philosophy in last year’s interview for Wave Radio: “I love when the music gives me goose bumps.” We believe that their concert at Pohoda 2018 will have the same effect on our visitors. 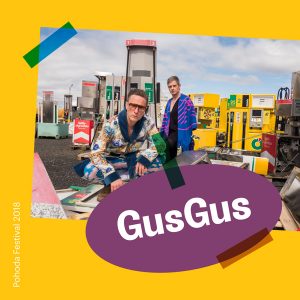 GusGus formed in 1995 basically by lucky chance as a project of talented actors, filmmakers, photographers, musicians, designers and vocalists. Their activities first led to the making of a critically acclaimed short film Pleasure, which won them several awards. The project soon started focusing on its musical side. They became one of the most sought-after electronic bands from Iceland back in 1996 already. After the release of album Polydistortion in 1997, they confirmed the status of international stars when they went on sold-out tour. During two decades on the scene, they have played almost all genres electronic music has to offer. From techno to trip-hop, from house to progressive house/trance, they’ve added their own distinctive hallmark to each of these styles. Today, the band features its founding members Biggi Veira and Daníel Ágúst. On their latest albums, they offer magical soundscapes from synth pop through deep techno to progressive house.

The main ingredients guaranteeing their success are the one-and-only vocal performance of Daníel Ágúst, mesmerizing electronica and insistent grooves accompanied by tender strings with Biggi Veira always being successful in making the audience beg for encore. At the beginning of this year, they released a new single “Featherlight” heralding their tenth studio album Lies Are More Flexible (by the way, they are about to release another single from this album, “Don’t Know How to Love”, tomorrow). muiscOMH portal says the following about the album: “Gus Gus remain one of electronic music’s most flexible entities, where band members come and go and record labels change, but the quality of the songwriting and production remains at a level most bands could only dream of.” We’re happy that GusGus are not a band Pohoda 2018 festival-goers can only dream of.