OFF FESTIVAL KATOWICE 2015: ONWARD TO THE MUSIC OF THE FUTURE! 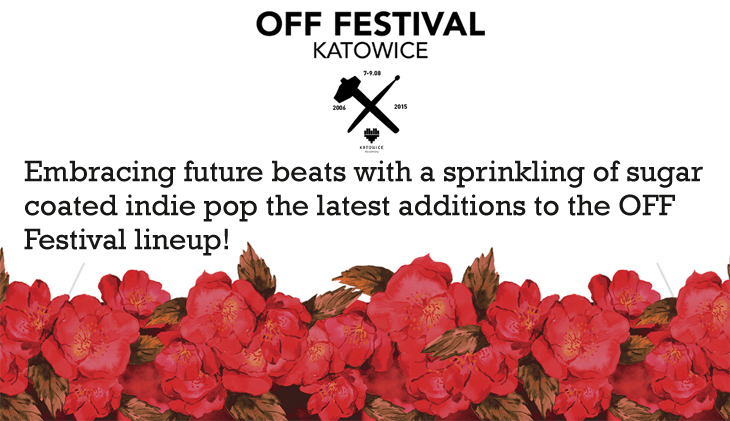 OFF FESTIVAL KATOWICE 2015: ONWARD TO THE MUSIC OF THE FUTURE!

Every edition of the OFF Festival is about celebrating the past and enjoying the present, but looking boldly into the future of music is just as important to us with the latest additions including; iLoveMakonnen, Colleen Green, Pro8l3m, ho99o9, Acid Arab, and our MasterCard scene DJs: Auntie Flo, Tornado Wallace and The Revenge.

iLoveMakonnen
The belated debut by Makonnen Sheran, better known by his stage name iLoveMakonnen, is the result of a tragic coincidence: the rapper was involved in the deadly shooting of a friend at the age of 18, and wound up spending the next few years of his life in a cell, under house arrest, and on probation. He spent his time writing music, posting tracks on MySpace and blogging. Makonnen’s career took off when Drake offered him a record deal with his label OVO Sound (and later remixed the song “Tuesday”). The Atlanta rapper officially debuted in December with the eponymous EP iLoveMakonnen, which won him a Grammy nomination. He’s now touring the US as a headliner, with Drake, Diplo, Rihanna, Skrillex and Snoop Dogg helping him wrap up a full-length album, one of the most highly anticipated releases of 2015.

Colleen Green
Collen Green grew up in a small town in Massachusetts but later moved to California, where she promptly discovered and fell head-first into the local indie scene. Hailed by the media as the queen of DIY, Green designs her own merchandise and runs her own business, but more importantly, she composes, performs and produces all of her own songs, which are as catchy as they are noisy. Her third album (and second release for the Sub Pop subsidiary Hardly Art), titled I Want to Grow Up, came out in February, and the title tells you all you need to know. Colleen Green remains unapologetic and independent, yet mature and fully aware of her uniqueness.

Acid Arab
This Paris-based duo can melt any dancefloor with their neck-breaking blend of Eastern tunes (from the Arab world to India) and the most effective tricks in house and contemporary techno. Guido Minisky and Hervé Carvalho’s distinct style was distilled during their trip to Tunisia for a festival performance, later documented on the acclaimed EP Acid Arab Collections, released by their tourmate DJ Gilb’R on his label Versatile Records. The disc’s astounding success led to a whole series of albums, and Acid Arab’s triumphal march through the best clubs and festivals has inspired innumerable copy-cats.

Pro8l3m
His 2013 EP C30-C39 was already an underground sensation. Last year’s mixtape Art Brut, however, elevated Pro8l3m to far greater heights than that of a niche phenomenon. Steez83 (a producer and DJ known for his work in Niewidzialna Nerka and his performances with Sokół and Marysia Starosta) provided the beats, which are based on samples from the biggest Polish hits of the 80s, and Oskar drops the kind of rhymes the Polish scene hasn’t heard in a long time: brilliant and brutal, smart and absurd, with the beat and against the grain. There’s a new force stirring in Polish hip-hop.

ho99o9
Did anyone expect the revolution to break out in the smug yet bored city of Los Angeles? And yet here we have it: hailing from New Jersey but based in LA, theOGM and Eaddy have really done their homework on the defiant sounds of the past three decades. Ho99o9 (pronounced “horror”) offers up a volatile cocktail of hardcore rage, hip-hop beats and grinding noise riffs. Their concerts are scenes of chaos, filth and fury: if you’re concerned about getting sweaty, going deaf, or having your personal space violated, stay away from these guys. While you wait for their debut album and OFF Festival show, listen to their EP Mutant Freax, featuring the punishing anti-police anthem “Hated in Amerika.”

Auntie Flo
This London-based ward of the Glasgow club scene has broadcast his afro-house sounds far beyond the borders of the United Kingdom. Auntie Flo rose to fame with his live sessions for BBC Radio 1 and the Boiler Room, while his debut mini-album Future Rhythm Machine (H+P 2012) led to his being hailed as one of the “most truly original production talents around” (Crack Magazine). He has released EPs and singles on such labels as Kompakt, Permanent Vacation, Mule Musiq and Autonomous Africa, and he has remixed tracks by Chrvrches and Crystal Fighters. Auntie Flo is the creator of the famous Highlife, an event held regularly in Glasgow, London and Edinburgh. He has an album slated for release this year. Auntie Flo will appear at the OFF Festival as a guest of the MasterCard DJ Scene.

Tornado Wallace
Australia’s Tornado Wallace has injected his deep house into the rich, warm sounds of the Balearic Islands. He can take over the dancefloor, but he’s just as adept with beats that are more hypnotic than stimulating. The Melbourne native records for Beats in Space and the ESP Institute. Tornado Wallace will appear at the OFF Festival as a guest of the MasterCard DJ Scene.

The Revenge
Performing under the stage name The Revenge, Scotland’s Graeme Clark has a clear affinity for tradition – evident in his fidelity to analog sounds – but he’s constantly on the lookout for new ways to develop his disco and funk-infused house. He has released records with such labels as DFA, Pokerflat, My Favorite Robot and his own record company, Roar Groove. His long awaited album is supposed to be ready any day now. The Revenge will also be performing at the MasterCard DJ Scene.

OFF Festival 2015 Tickets
Tickets are now available for 200 PLN at the OFF Shop, the price of a camping spot is 60 PLN, with an additional night (August 6/7) for 20 PLN.
Tickets for OFF Festival and Festival Village camping spot passes available at OFF SHOP and See Tickets.
Festival passes, packages incl. camping spot and hotels at www.festicket.com