OFF FESTIVAL 2017: BRINGING THE US AND THE UK BACK TOGETHER AGAIN

OFF FESTIVAL 2017: BRINGING THE US AND THE UK BACK TOGETHER AGAIN 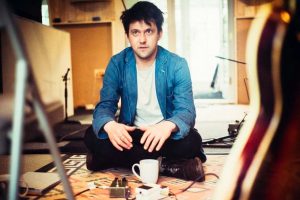 Legendary singer-songwriters from across the pond meet rising stars from across the channel. Conor Oberst, Arab Strap, Thee Oh Sees, Sheer Mag, Ulrika Spacek, Anna Meredith, and LVL UP: check out the latest additions to this year’s lineup.

Conor Oberst
It’s been well on twenty years since he started singing and playing, and we’ve listened and admired him every step of the way, from Bright Eyes and Desaparecidos to The Mystic Valley Band, Monsters of Folk, and of course his solo recordings. There are precious few storytellers on the music scene today that are as captivating as Conor Oberst and who can deliver their tales in such an engrossing format, combining folk, country, and rock, and prepending the “alt-” prefix to all of the above. The singing poet just came out with another excellent solo album titled Salutations before setting off on tour with his live band. He’ll be stopping by Katowice one August night to tell us something important and beautiful.

Arab Strap
There’s no better way to put this than one reviewer at The Guardian did: “The demise of Arab Strap leaves the rock world a rather more wholesome place, but a slightly less profound one.” This Scottish duo delivered emotions that,though real — perhaps painfully so – were hard to swallow. But once they were gone, we all understood just how important and unique of a phenomenon Arab Strap were in British music at the turn of the centuries. In 2016 their fans’ prayers were answered: Aidan Moffat and Malcolm Middleton once again took to the stage to celebrate the band’s 20th birthday. We’re thrilled that the party’s gone on long enough to bring Arab Strap to Katowice.

Thee Oh Sees
We’ve featured Thee Oh Sees at the OFF Festival before, but we’re not just repeating ourselves here. The band has managed to release a full four albums since their last visit to Katowice: Drop, Mutilator Defeated at Last, A Weird Exits, and An Odd Entrances, all while changing their lineup and basically reinventing themselves. But one crucial aspect remains the same: there’s no greater expert on genre-agnostic psychedelic garage rock than this California act.

LVL UP
Return to Love, LVL UP’s third album and Sub Pop debut, is the quintessence of guitar-driven energy and sets the standard for American indie rock. It’s clear that Pavement, Neutral Milk Hotel, and Dinosaur Jr. have some talented students. The New York quarter has also earned a reputation as an excellent live band, a title they defended most recently at this year’s SXSW Festival in Austin.

Anna Meredith
She may this season’s great sensation, but she’s going to be with us for a while. Her enthusiastically received debut album Varmint and her electrifying shows at industry festivals like Eurosonic Noorderslag and SXSW leave little room for doubt: we’re witnessing the birth of a star, one whose charismatic stage presence is matched by the bold vision of her compositions. Critics have compared her to the likes of Björk and Moderat, but that hardly does her justice. A graduate of the Royal College of Music, Meredith was until recently a regular performer at the BBC Scottish Symphony Orchestra and Sinfonia ViVA, before going on to redefine the boundaries of new pop with her own musical vocabulary.

Ulrika Spacek
Though they hail from London, this quintet’s sound includes few of the features you’d expect to hear from members of the British rock scene. In fact, reviewers of their debut album The Album Paranoia suggested influences ranging from trancey Krautrock to American noise rock. The band’s sophomore record, titled Modern English Decoration, is slated for release ahead of this year’s festival, so anything could still happen.

Sheer Mag
Take one listen to this Philadelphia band’s EPs and you won’t have any doubt in your mind: you’re dealing with a band that could have easily opened for MC5, Stooges, or New York Dolls if they had only made it big in time. The fact that Sheer Mag wasn’t founded until 2014 changes nothing. This great a blend of early punk and hard rock that makes nods to Led Zeppelin and Thin Lizzy is something you can’t come up with. You just have to live it.

Everything from poetry to noise

As always, the OFF Festival is all about intense emotions: from Feist’s touching, ethereal songs to guitar-driven roller coasters like Preoccupations and Royal Trux.

Feist
Leslie Feist is a charismatic Canadian singer who follows her own path between tasteful indie pop and an original interpretation of American folk. She’s a favorite with audiences and the music industry for her unique character, a quality that’s most evident in her solo albums and her contributions to Broke Social Scene. Feist has been showered with trophies, including several Juno Awards and the Polaris Prize, and nominations to the world’s most prestigious music awards — the Grammys and BRIT Awards. Many of her songs have been featured in films, commercials, and the repertoires of other artists — James Blake’s career took off after he released his cover of “Limit to Your Love.” There’s a lot to look forward to this year, with new records coming out by both Broken Social Scene and Feist (her long-awaited fifth solo album), and — something we’re particularly excited about — the artist’s first performance in Poland. At the OFF Festival, of course.

Preoccupations
Another Canadian addition to our lineup, Preoccupations debuted in 2015 with the then-self-titled album Viet Cong. The band later discovered that the reference to the name of the Communist forces of Vietnam was too much for some people, so they rebranded themselves as Preoccupations and followed up with a sophomore release in the fall of 2016, the once again eponymously-titled Preoccupations. It was every bit as good as the debut, but much richer: a post-punk roller coaster with new loops and corkscrews, from industrial and noise rock to ambient and shoegaze. As one Pitchfork reviewer points out, Preoccupations is a nod to both Swans and Echo and the Bunnymen, yet the band communicates with its audience in its own vivid language.

Royal Trux
A band’s dissolution doesn’t have to spell bad news: the breakup of the punk act Pussy Galore, for example, led to the formation of two more excellent groups. The first was The Jon Spencer Blues Explosion; the other was Royal Trux. The duo formed by Neil Hagerty and Jennifer Herrema spent the entire 90s exploring their own vision of noise rock (or rather noise rock’n’roll). This year at the OFF Festival, we’ll be celebrating Royal Trux’s comeback following a nearly two-decade hiatus. And we hope they’re back for good, because they’ve got the kind of energy the world needs.

PRO8L3M
Anyone who saw their mind-blowing performance two years ago was probably willing to bet a hundred bucks they’d be back. And that would have been a winning bet. But no one could have predicted that the nostalgic yet urban vibe of their debut album Art Brut would be reforged into the dystopian futuristic visions assembled on their follow-up concept album. Simply titled PRO8L3M, the record reinforced Oskar and Steez’s presence on the scene while proving that the horizons of hip-hop go on forever.

Made In Poland plays Martwy Kabaret
A Kraków-based band that evolved out of the punk crew known as Exhumacja. One of the leading representatives of the Polish cold wave, i.e., sulky, hypnotic post-punk. Revolutions in guitar rock took a while to seep into the Polish People’s Republic, so it’s no wonder that Made In Poland achieved cult status: they were among the few contemporary acts that actually responded to what was going on on the international music scene. Unfortunately, the lyrics to their planned mid-80s record Martwy Kabaret were rejected by the censorship bureau and the album was never recorded. It was ultimately released in 2008 as a collection of archival recordings which turned out to have retained every bit of their original power.

Shame
With their compelling music, political awareness, and highly-charged stage presence, this London-based group has revived our faith in young guitar bands. Cheeky and catchy at the same time, they nod to the rich heritage of British punk while incorporating the street sounds of recent years, from The Streets to Sleaford Mods. Their fall 2016 debut EP The Lick / Gold Hole earned an enthusiastic reception, and everyone’s looking forward to their full-length debut. And we’re looking forward to their show in Katowice.

Duży Jack
Originally formed as an excuse to play live covers of Starzy Singers songs, this band must have done something right, because they’re still here today. Duży Jack (“Big Jack”) is what you use to plug a big guitar into a big amp to make big noise, and that’s precisely what you can expect to hear on Uczucia, the band’s excellent debut record, and at their show in Katowice: pure, distilled hard core/noise rock/rock’n’roll.

Spoiwo
We always roll out the red carpet at the OFF Festival for representatives of the tri-city scene, because they’re guaranteed to be bearing gifts of intriguing and original sounds, and Spoiwo is no exception. Their trademark take on post rock has garnered attention from audiences in Poland and abroad. But that’s just what you’d expect from music that crosses genre boundaries.

About OFF
OFF is a festival for the discerning music fan and the place to discover the best alternative acts from around the world. A truly unique boutique music festival, OFF Festival takes place in ‘Three Lake Valley’, Katowice – a beautiful green oasis in the heart of industrial Silesia. OFF is a way of life, one that flies in the face of current trends and stays true to itself, and the ethos of organiser Artur Rojek is firmly aimed at supporting art and music with the festival bringing many acts to Poland for the first time. OFF Festival’s reputation is growing year on year driven by the festivals forward–thinking, eclectic music policy and it’s bold and eclectic lineups. From the greatest alternative music stars from around the world to the increasingly strong Polish scene, OFF festival has inspiring music in abundance and the organisers and crowd have one serious finger on the pulse when it comes to music.