OFF FESTIVAL 2016 – A KILLER DOSE OF GOOD MUSIC

OFF FESTIVAL 2016 – A KILLER DOSE OF GOOD MUSIC

We’re pleased to announce that this year’s edition of the OFF Festival will feature the Electronic Beats Stage, showcasing a variety of outstanding local and international electronic music artists, including Derrick May, Pantha du Prince, Masecki vs Sienkiewicz, and Rødhåd. Launched over a decade ago, Electronic Beats by T-Mobile is a program created to promote the visionary music of the future. The Electronic Beats Stage will be located on the spot of what was previously the Forest Stage. 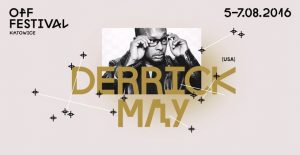 Derrick May
It’s no accident that one of his albums bears the title Innovator. And there’s a reason why, for many years, Derrick performed under the stage name Rhythim is Rhythim. This man is a living legend, a contemporary electronic music pioneer, one of the founding fathers of the Detroit techno scene. An artist who changed the face of electronic music forever, pushing it down the path we know today. Though he hasn’t recorded any new material in a while, his live shows confirm that Derrick is at the top of his league. Come and see Professor May deliver a lecture on what techno is supposed to sound like.

Pantha du Prince presents The Triad
We’re all perfectly familiar with Pantha du Prince: he’s a visionary artist who pushes the boundaries of contemporary electronic music, one who revels in tearing down the walls separating musical genres and even artistic disciplines. Just check out the noise experiments he conducts on the appropriately titled album Black Noise, or Elements of Light, a futuristic symphony for electronic instruments and bells.
But what’s this Triad all about? For starters, it’s the title of the German artist’s latest album, but it’s also an exceptional project of sorts, one that also features the guitarist Scott Mou (of Panda Bear fame, and one half of the duo known as Jane) and the Norwegian drummer/composer Bendik Hovik Kjeldsberg. Together they create an audiovisual universe in which electronic minimalism coexists with a psychedelic racket and danceable rhythms.

Masecki vs Sienkiewicz
One of Poland’s most outstanding and versatile pianists, and a pillar of the Polish electronic music scene, performing together at the OFF Festival! The unpredictable Marcin Masecki and the master of constant self reinvention, Jacek Sienkiewicz. Will they cooperate, or will they attempt to dominate one another? Should we expect contemporary music, or is this going to be the future sound of Poland? We don’t know, but we can’t wait to find out. What we do know is that their performance at the OFF Festival will mark the announcement of the duo’s upcoming collaborative release.

Rødhåd
His music exists in the triangle formed by throbbing bass, late-night melancholy, and the hypnotizing power of ascetic beats. One of the leading figures on the Berlin techno scene, Rødhåd is the man behind the legendary series of events known as Dystopian and the founder of the label by the same name. Once you’ve dived into his dub techno, you’ll have a hard time coming up for air.

Kero Kero Bonito
A crazy British act whose music blends video game scores with dancehall, only to get lost in a frenetic J-pop chorus. Kero Kero Bonito features two producers at the helm, Gus Lobban and Jamie Bulled, along with the energetic Sarah Midori Perry on vocals. There’s no way this wasn’t going to work, and sure enough, it did. Check out their debut album Intro Bonito as well as the recently released single Lipslap, promoting their upcoming LP.

Rysy
A musical project by Wojtek Urbański (V/O) and Łukasz Stachurko (Sonar Soul) that took the Polish electronic music scene by storm last year. Their debut album Traveler scored enthusiastic reviews, their song “Przyjmij brak” (sung by Justyna Święs of The Dumplings and Piotr Zioło) became a hit, they played sold-out shows, and they landed a handful of industry awards (from the Aktivist’s Nocne Marki to the Monoludy prize). It’s about time they appeared at the OFF Festival.

67,5 Minut Projekt
A group founded by Piotr Zabrodzki and Macio Moretti. It’d be easier to make a list of alternative Polish bands they don’t play in, so let’s just say that these guys are great. And they’re from the label Lado ABC. Let’s hear what they have to say: “This time, after blowing out several speakers and touring exotic countries like Poland and Sweden, the duo invited half of the band 15 Minut Projekt — the turbodrummer Janek Młynarski — to join the team.”

Niemoc
Their name might translate as “impotence,” but don’t be fooled: this is some potent stuff. Borrowing from the cold and dark sounds of 80s post punk and the somewhat embarrassing dancefloor excesses of the following decade, this Zielona Góra-based trio works just as well in the studio (find out how well this May when the EP Paramaribo comes out) and on stage, where things often take an unexpected turn…

Jóga
When Jóga appeared on a popular TV talent show, they provoked both an enthusiastic response and consternation: what was this intimate, soulful music doing in the temple of commerce? Rafał Skowroński (vocals, effects, bass) and Kamil Łukasiuk (guitar, effects, bass) will be right at home at the OFF Festival, though, because the event was made for artists like these: fanatical individualists who go against the grain. The duo from Katowice doesn’t have much of a catalog so far, aside from their self-released EP Skin, but that’ll change soon enough.

Sotei
A duo made up of the drummer Wojtek Sobura (a regular collaborator with Kasia Nosowska and Skubas) and the excellent producer Teielte, who has released four solo albums of his own. The two joined forces and laid down some tracks that they claim will “release your inner beast when you hear them live,” thanks to the “spacious sound of the sampler and the reckless drumwork.” The record is set for release this spring on U Know Me records, and they’ve got a show coming up this August (you know where).

A killer dose of good music

They say it’s a good day if you don’t have to use your AK, but we’ll settle for a day when we get to announce the addition of a Polish hip-hop legend and five other excellent artists to the OFF Festival 2016 lineup: Anohni, The Kills, Thundercat, Kaliber 44, Willis Earl Beal, and FIDLAR. 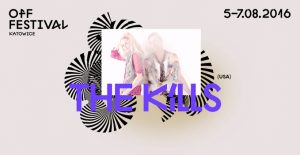 The Kills
At the turn of the century, the American singer Alison Mosshart and the English guitarist Jamie Hince reinvented the sound of British garage rock, giving us something as loud and dangerous as it is catchy and sexy. And while in recent years Alison has spent more time appearing alongside Jack White in The Dead Weather than with her own band, and the tabloids have devoted more coverage to Jamie’s private life than his music, The Kills are just as deadly onstage as they’ve always been. Much time has passed since the 2011 release of Blood Pressures, the duo’s last album to date, and the word is that they’re working on a new record. Let’s hope we catch a glimpse of things to come this year in Katowice.

Anohni
Anohni calls her debut release “an electronic record with some sharp teeth.” The voice and charisma familiar to fans of her work with Antony and the Johnsons returns in a new and original context on an album recorded in collaboration with Oneohtrix Point Never and Hudson Mohawke, two of the leading names in contemporary electronic music. Hopelessness juxtaposes dance beats with political lyrics that touch upon such topics as mass surveillance and drone warfare. Anohni takes her work to the stage with an unexpected twist, performing inside a live avatar.

Thundercat
Stephen Bruner has lived and breathed music since the day he was born. His father, Ronald Bruner, Sr., played the drums for The Temptations and Diano Ross, while his brother, also a percussionist, has collaborated with Wayne Shorter and others. For a couple of years, the two brothers made up the rhythm section of hardcore legend Suicidal Tendencies. But Stephen’s true musical love lies elsewhere: it’s jazz and its ilk, it’s soul, funk, and hip-hop, and finally, it’s an original blend of all the above genres — a blend with which Thundercat charms his listeners on his own albums and as a guest musician for such artists as Kendrick Lamar, Flying Lotus, Erykah Badu, and Kamasi Washington. We’re proud to host an artist of his caliber at the OFF Festival.

Willis Earl Beal
A charismatic outsider from Chicago who’s hard to keep up with and impossible to label. When critics and fans — enchanted with the rawness of his debut album Acousmatic Sorcery and the fervor of Nobody Knows — pigeonholed him as “new dark soul,” Beal opted not to mine the genre that brought him success, instead redirecting his efforts into musical experimentation. The result was the 2015 LP Noctunes, with its poignant, lazily-flowing hymns, brimming with pain and longing. But to truly comprehend the phenomenon that is Willis Earl Beal, you need to see him in concert, where neither emotion nor vocal talent can be faked — and you’d be hard pressed to find a more authentic singer.

FIDLAR
This is what it sounds like when you let a little sunlight shine into the garage. California’s FIDLAR (short for Fuck It Dog, Life’s a Risk) will sweep you away with their skate punk energy and laid-back surf rock riffs. There’s no way you’re not going have fun with these guys at a summer music festival, though the lyrics on their latest album, Too, are no mere party anthems: quite the opposite, in fact. They’re a warning about what happens when partying takes over your real life. Unless your drug of choice is music, that is.

Kaliber 44
Kaliber 44 needs no introduction in Poland and particularly in Silesia. They’re a living legend, one of Poland’s first hip-hop bands and the only one of their kind, though their psycho-rap style continues to inspire legions of imitators. If we could wait 16 years for AbradAb and Joka to release their latest album, Ułamek tarcia, we can wait another few months to see them live at the OFF Festival, especially now that we know what to expect. The brothers are back in top form and they can look forward to “a whole year of hands in the air,” to quote a line from one their new tracks.