As Oasis Festival gets ever closer, the next wave of mouthwatering headliners has been announced for the party in paradise which takes place in Marrakech, Morocco, from the 14th to the 16th September 2018. New acts announced today include DJ Koze, Bradley Zero, Romare, Deetron, Sassy J, Detroit Swindle, La Fleur, Larry Heard (live), Maribou State, Honey Dijon, Jane Fitz, Mr G live, Peggy Gou and DJ Python, plus many more. 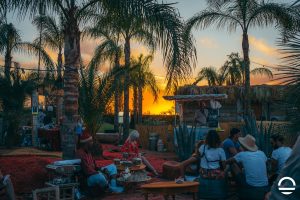 Oasis Festival has decided to return to its roots this year. As such the party is moving to the blissful Fellah Hotel, where the first edition took place and plenty of happy memories were made. The stunning location, complete with pools and palms trees, lush gardens and giant cacti, not to mention a new layout and an extra stage, is an exciting move that proves Oasis Festival is always keen to subtly evolve and adapt.

In case you don’t want to leave Oasis Festival, you might be in luck this year, as plans emerge for a very special afterparty that will take you deep into the Sahara desert for an extra night or two. Soundtracked by very special guest DJs (to be revealed soon!), it will be a chance to decompress and then have one final, magical dance in what is set to be a truly once-in-a-lifetime experience. Keep your eyes peeled for more info coming soon.

Oasis 2018 will take place from 14th – 16th September 2018. 3-day festival tickets from 180€ are on sale now. Book your place and keep up to date with all of the latest news at theoasisfest.com.