NEW ECHOWAVES FESTIVAL IN GEORGIA POWERED BY EXIT DAZZLED OVER 40.000 VISITORS IN ITS FIRST YEAR 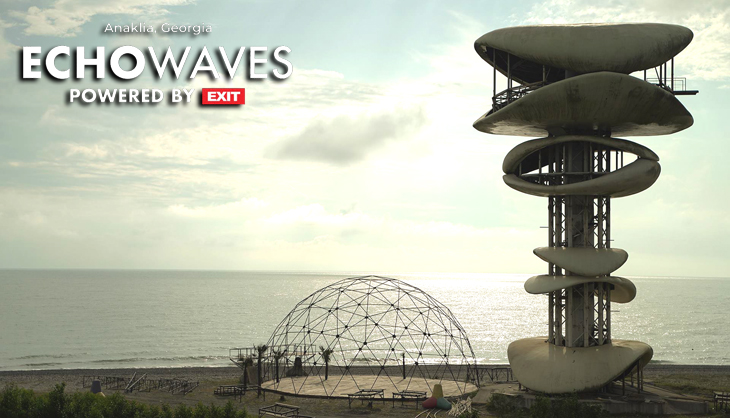 NEW ECHOWAVES FESTIVAL IN GEORGIA POWERED BY EXIT DAZZLED OVER 40.000 VISITORS IN ITS FIRST YEAR

The first edition of EchoWaves, a new music festival in Georgia, after its start on Thursday 23rd of August, successfully ended on Monday, the 27th, after four days and nights of non-stop parties in the stunning seaside resort Anaklia. Powered by the team of EEMM, Collegium and major European festival brand EXIT, known for its various festivals across several countries, EchoWaves 2018 featured some of the leading electronic music acts in a variety of styles, playing on Funktion One sound at quite unique and creative stage designs. In its first year, the new Georgian premium event saw more than 40.000 visitors and festival tourists from over 35 countries like Russia, Ukraine, Germany, UK, USA, Poland, Armenia, Iran, Azerbaijan, Canada, UAE, Serbia, Macedonia, Slovenia and many more in a mix of nations so diverse and hardly seen at any such event in the world. 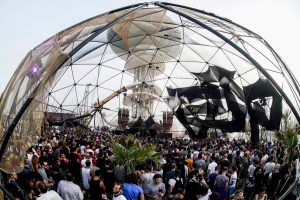 The gorgeous and still quite unspoiled coast of usually very sleepy seaside town of Anaklia at the eastern shores of the warm Black Sea, hosted some of the most in-demand acts and EXIT’s favourites like Die Antwoord, Ben Klock b2b Marcel Dettmann, Tricky, DJ Tennis, Antigone, Francois X, Bjarki, Function, Moscoman, Moritz Von Oswald and nearly 150 more artists, including Georgia’s finest. One of the festival highlights was certainly the grand opening with techno symphony by Juan Atkins, The Originator from Detroit followed by the Georgian Alter Orchestra, conducted by the Macedonian maestro Dzijan Emin. „EchoWaves in Georgia was fantastic, especially the after!“, were the first impression shared online by house music ultimate boss Solomun. After his impeccable set at the Main Stage, DJ symbols went on to play the after party too, totaling in 13 hours sonic voyage with colossal tunes from his Diynamic label which sent to EchoWaves more of his label mates like Kollektiv Turmstrasse, Musumeci, and Lehar. 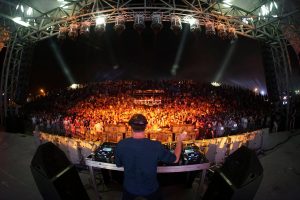 Among many more, the long list of acts also included Henrik Schwarz, Max Cooper, Dominik Eulberg, Derrick Carter, Anetha, Claro Intelecto, Ancient Methods, Jonas Kopp, Lucy, and even Foals in a DJ set. All spread over five stages and various additional zones where you could learn more about local NGO activism or simply meditate after a long dance. The second largest stage was hosted by the famed Tbilisi club Khidi, while the Eye stage lived up to its name is the most visually attractive thanks to being built around Anaklia’s UFO-like tower on the beach. Another melting point was the bustling Tayio stage, while the freshest of them all was, as the name suggests, the Aqua stage. 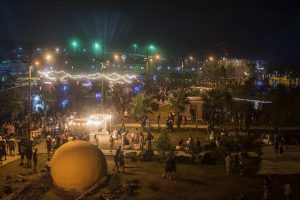 Just like EXIT Festival is connected to its hometown Novi Sad by a bridge that swarms with punters each night, the only entrance to EchoWaves is also a bridge between the town of Anaklia and the festival site that made some of the most scenic imagery throughout the extended weekend. The sold-out campsite provided a perfect festival vacation next to the beach while diving into continuous music that was richly supplemented by various daily activities. From sports like basketball, football, volleyball, to some of the adrenalin rushes of Zipline and Slackline, and visual extravaganzas like Colours Fest and Monster Soap Bubbles. Lovers of rising spiritual side of today’s music festivals could enjoy yoga, mehndi, and even some astrology, but the true awe came from the spectacle with flying kites on the third day!

After the big initial success made in the very first year, it’s safe to say EchoWaves Festival will return with risen ambitions to become one of the world’s most exciting festivals, EchoWaves will undoubtedly add up to Georgia’s image as a country with a rich history with a very modern touch and one of the fastest developing tourist destinations in a ferociously competitive global arena.