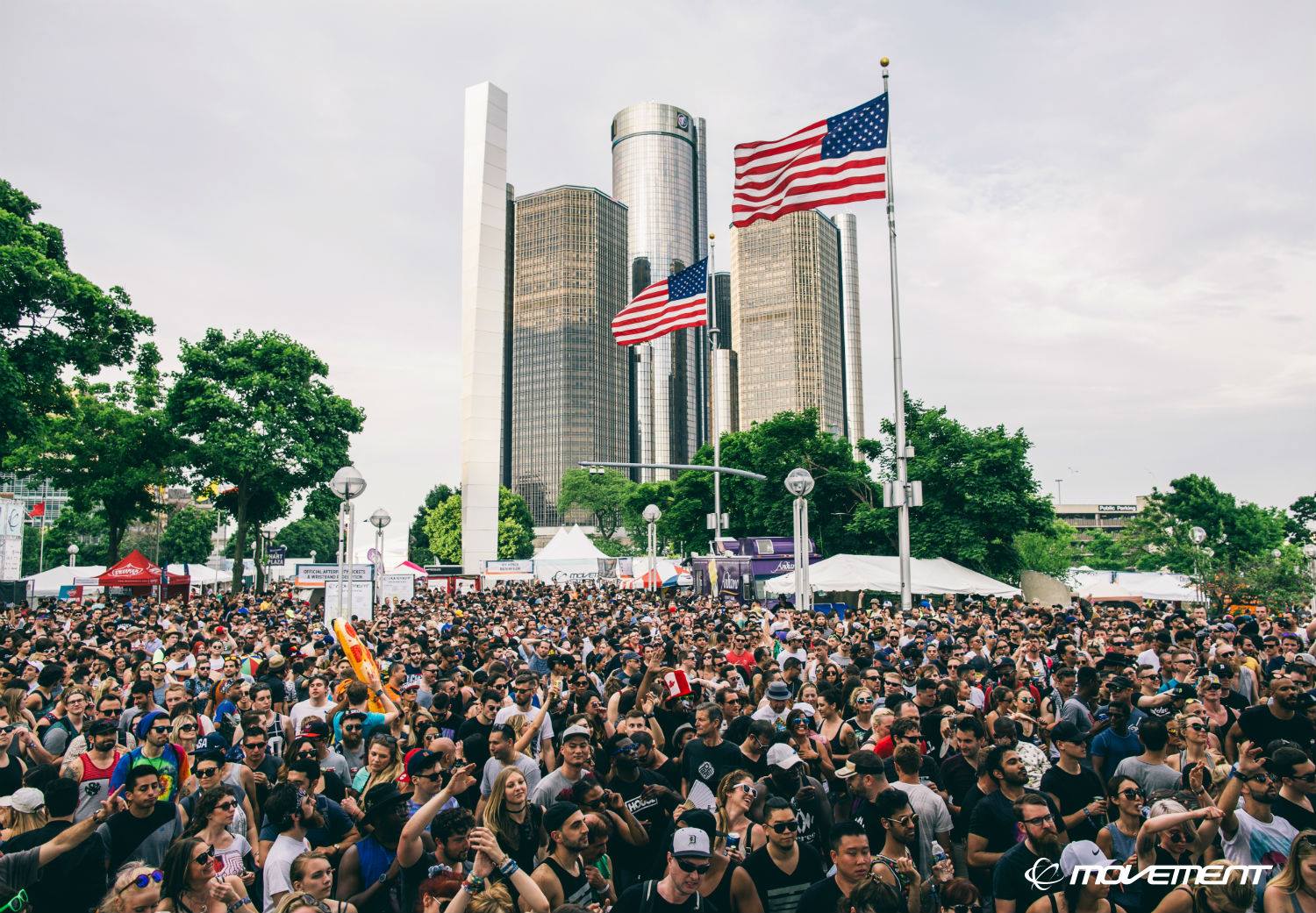 Movement Electronic Music festival is an annual three-day celebration of Detroit’s electronic music legacy held during Memorial Day weekend. This year was its 10th edition, and Movement maintains the course as the electronic music festival that celebrates independent, authentic music where sound quality and the listening experience are the highest priority.

We attend techno events every weekend, but what you get in Detroit is very different from any other techno event around the world. Music-wise, the lineup was filled with world-class techno DJ’s, whom you can see at any big underground electronic music festival. What makes the festival so extraordinary, is the vibe. There is a weird mix of American Midwest culture and techno – an exceptional crowd that we have never seen before at any other festival.

First of all, the festival is held in the heart of downtown Detroit, the Hart plaza, a park with several concrete infrastructures and surrounded by skyscrapers. It borders the river and gives beautiful views over Windsor, Canada, at the other side of the river. This urban setting on its own is already special; imagine the light show from the festival being projected on those buildings. The urban setting also adds to the raw underground choice of the music programming.

On top of that, there is the obvious infiltration of American Midwest culture into the whole production. Not only the specific crowd that the festival draws from the American EDM scene, but also the offer of food trucks and merchandising remind of an American amusement park. Lemonade flush machines, XXXL milk shakes, hot dogs, and deep dish pizzas, along with LED lit hula hoops and other bright colored accessories that you’ll never find at any other underground techno festival. We sat down at the middle of the plaza for a while just to take in all the impressions and to watch the different people pass by. It makes the whole experience only more interesting.

Besides the official festival, there is a bunch of official and unofficial after parties (and pre parties) organized in different venues all over Detroit: rooftop bars, dive bars, outdoor areas, warehouses, and even the immense ballroom of the Masonic Temple. The last was definitely the most impressive – the Detroit Masonic Temple is the largest Masonic Temple in the world, and it definitely is massive! It reminds you that Detroit once was one of the richest cities in the world. Moreover, one of the best after parties was held there, the Detroit Love party with Carl Craig, Dubfire, Seth Troxler, and Keith Kemp.

Another venue that we especially enjoyed was the TV Lounge, which has three stages, both indoor and outdoor, and a BBQ. Both the OK Cool! party on Sunday and the party held by Smartbar and Resident Advisor on Friday were top class. Especially Delano Smith impressed with his typical Detroit Sound. Also worth taking note of for next year: the Resolute party on Sunday morning, held at a nice rooftop bar in lively Greek Town, and the party in the garden of The Old Miami on Monday. There is a one hour wait in the line, but Seth Troxler himself comes out to hearten the waiting crowd, shouting that it will go fast if everyone clears their bags of forbidden substances and has a ten dollar bill ready to pay at the entrance.

The only downside, especially for Europeans who are not used to American laws – many venues stop selling alcohol in between 2 am and 7 am. An alcohol-free party is difficult to imagine for Europeans, but it’s very common in the U.S (in case you were wondering: this policy does not result in less wasted partygoers).

We can definitely recommend a trip to Detroit for next year’s Memorial weekend. It was worth to fly from Europe for just five days. Although, we have to admit, it’s an exhausting trip, especially if you want to make the most out of it and attend some after parties as well. On Tuesday, we made some time to visit Detroit. Amongst others things, we climbed into an abandoned factory – a must see that tells a piece of Detroit’s history. You get to see the remains of Detroit’s glory times, and the decline of it. But you also get to see that Detroit is trying hard to regain its charm. Roads in Detroit are wide and obviously designed for more traffic, but the empty roads are a relief compared to the always too busy streets in other cities. In downtown Detroit, we saw many new bars and restaurants that have opened their doors during the last four years. There is definitely a revival and you may expect that it will be even better next year.

Movement’s 10th edition was undeniably a success. In case you are thinking about attending next year’s festival (May 27-29, 2017), it’s not too early to begin planning. This Friday, June 17th, from noon until midnight, EST, you can take advantage of a special Movement Appreciation 1-Day Sale. Limited General Admission Weekend tickets will be available for only $100. Limited VIP Weekend tickets will be available for only $200. Purchase your tickets HERE and enter the code: DETROIT2017 (code will be active on June 17 at noon EST). Also, be informed that accommodation is scarce during Memorial weekend, because thousands of people travel to Detroit that weekend, and there are not that many hotels. Thus, book your accommodation on time!