Quick flamenco enhanced with rock and heavy metal made the duo Rodrigo y Gabriela one of the most popular Mexican bands. It was the interesting combination of Latino music and harder music genres that made them beat the greats such as Arctic Monkeys and Johnny Cash in the Irish charts after the release of their debut album. They participated in the soundtracks of the Pirates of the Caribbean, series Breaking Bad, and fairy tale Puss in Boots; they also played in the White House. These unique musicians will show extremely fast fingers and cutting-edge guitar technique at Pohoda 2017. 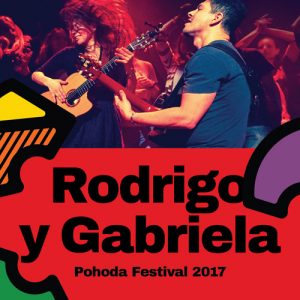 Rodrigo Sanchezʼs and Gabriela Quintero’s taste in music was shaped in their childhood especially by parents who listened to flamenco, jazz, and rock. In teen years, this mixture absorbed a very important inspiration – Metallica. Rodrigo and Gabriela met when they were fifteen: Gabrielle was fascinated with her later (personal and professional) partner’s huge passion for music. In early 90s, Rodrigo and his brother started metal band Tierra Acida, which included Gabriela as a new member in 1993. After their recording contract failed, the couple left the capital of Mexico and started making living playing in Ixtapa resorts on the Pacific coast. In 1999, with no sufficient knowledge of English, they moved to Ireland. They earned extra cash playing on Grafton Street and Dublinʼs bars. Their repertoire of cover versions was gradually increasing with their original works, which attracted more and more fans and friends. One of them was also Damien Rice, who invited them as opening act for one of his concerts and introduced them to other influential people. In 2001, they recorded their demo Foc. A year later, they were released re-Foc, which hosted artists such as Lisa Hannigan and Zoe Conway.

They had a considerable success with their 2006 album Rodrigo y Gabriela, which brought them on the top of Irish charts, which was followed by an appearance on Late Show with David Letterman, live albums, music for series, and in 2009 by another acclaimed album 11:11. According to Billboard, this recording is a “winning showcase of exotic instrumental brilliance.” Other media such as The Guardian, Q, and Mojo rated them 8 out of 10, and the band has also played in TV shows on BBC (Jools Holland) and NBC (Jay Leno). The following year they were headliners of The West Holts Stage at Glastonbury 2010 and have also played on the main stage at the Latitude Festival. Year 2011 saw their cooperation with aces of film music such as Hans Zimmer and Henry Jackman. They released another album, Area 52, in 2012. The Independent wrote they are “seething, soundtracky, high-gloss, high-energy orchestral Latin fusion, full of licks and stabs and twiddly bits.” In 2014, they released so far the latest album 9 Dead Alive. Rodrigo y Gabriela have already proved their qualities and convinced members of our team at various events. Their passionate play and extreme speed of fingers was wittily commented on YouTube under song Tamacun by one of their fans (K31TH3R): “Do not try this at home! These are trained professionals and they are prepared for the risks involved while using an acoustic guitar like this. Just out of frame there is a team of fire fighters ready to hose down the guitars should they catch fire.” We at Pohoda, too, have a water tank ready, so that nothing prevents the phenomenal couple Rodrigo y Gabriela to showcase their art at our festival.

The author of the album of the year 2016 (Pitchfork, Spin, Vibe) and winner of a 2016 Grammy Award, Solange Knowles, will be playing Pohoda 2017. Her latest album A Seat at the Table has been praised by the likes of Time, Chicago Tribune, Clash, Mojo, NME or Rolling Stone. Solange is currently one of the biggest R&B and soul stars and definitely doesn’t live in the shadow of her sister Beyoncé. We’re glad that besides Primavera or Panorama festivals, Solange will be one of the big names on our bill as well.

Solange Knowles has been singing since childhood, started writing her songs at the age of nine and signed her first contract at the age of sixteen. The young artist was influenced by the distinctive singers and bands of the 1960s such as The Supremes, The Marvelettes and Martha Reeves. At the end of 2002, she released her debut Solo Star. This pop-oriented album rather complied with record label’s expectations than singer’s artistic vision and ambitions. Her influence is more present on the second album Sol-Angel and the Hadley St. Dreams released in 2008. The album debuted at number 9 on the US Billboard 200 and according to Vibe magazine, it was the best R&B record of the year. The album features successful singles such as “I Decided”, which she wrote together with Pharell Williams, or song “T.O.N.Y.” Besides rave reviews, she won her first big award, when she was given ASCAP Award (American Society of Composers, Authors and Publishers) for “Get Me Bodied”, a song written for her sister Beyoncé. Her EP True from 2012 confirmed the upward trend. Solange left the big record label Interscope and set out for a more independent journey, which was recognized in rave reviews from media such as LA Times (8.8/10), Pitchfork (7.8/10), NME (8/8), BBC (8/8) and many more. On the dance songs reminding of the 1980s vibe, she collaborated with producer Devonté “Dev” Hynes. Media compared some parts of her songs to the likes of Madonna or Jackson, but at the same time praised her innovative approach and Solange’s original handwriting.

That Solange can express herself even better is something she proves four years later with the release of her latest album A Seat at the Table. A tribute to the dance music of the 1980s is replaced by an extremely personal record. As Pitchfork wrote: “Solange’s new record is stunning, a thematically unified and musically adventurous statement on the pain and joy of black womanhood.” This manifesto was named the album of the year on Pitchfork as well as Spin’s and Vibe’s end-of-year lists. In Time or The Quietus lists, it ranked number 2. The album reach number one on the US Billboard 200 and six tracks from the album made it to the Hot R&B Songs Chart. Solange appeared in nominations for NME Awards, Brit Awards or Grammy and her first nomination for a Grammy brought her the award in the category of “Best R&B Performance” for her song “Cranes in the Sky”. The story of the lead song also shows how long she was working on her most successful album. She wrote the song more than eight years ago in Miami, where she sought refuge after breaking up with her husband. What inspired her was her own experience of building happiness as well as developer projects which covered Miami and its panorama with cranes at the time. They were supposed to build more and bigger buildings… but we all know how it ended. The bleak analogy between the city and her own life served as an inspiration for a beautiful personal song.

But this album, or music film or R&B operetta, if you will, is full of such songs. It is intertwined with powerful statements of important people in her life. As Pitchfork editors end their list of Top 50 Albums of 2016, they say “It is an offer of solace for anyone working towards their own glory, and for those whose right to dignity is long overdue.” And they conclude the review of her latest album with words from album’s penultimate song “Scales”. Solange and Kelela address black women, but Pitchfork says those words back to the author: “You’re a superstar.” We’re proud to have Solange perform the album of the year 2016 just a few months after its release at Pohoda 2017.