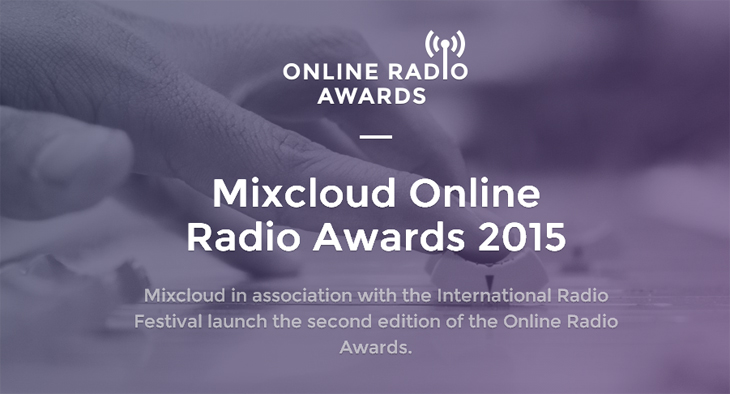 After the successful launch of the Online Radio Awards in 2014 the International Radio Festival have once again joined forces with Mixcloud to recognize the outstanding curatorship, production and creative talent within the online radio industry.

Ultimately, Mixcloud is about discovering great radio content, and that’s where the Online Radio Awards come in. The company launched the awards last year to help celebrate and champion the best content in the growing sector of Internet radio.

Over 5,000 radio makers and listeners nominated shows for the categories of Best Online Radio Station, Best Online Music Show and Best Online Talk Show, with 24 sub-categories spanning a range of genres and territories. The 130 shortlisted nominations were whittled down to the 24 winners by a panel of industry judges that include programme makers and executives from LA’s KCRW, SXSW, 7digital, Mixcloud and last year’s winner NTS Radio.

Phil Catchpole, Programme Manager of The Selector – a radio show produced by the British Council – said: „We are absolutely delighted to win the Best Online Music Show. Mixcloud has become the place to share radio shows online and to be recognised as one of the best shows on the platform is a wonderful thing.“

Orpheu de Jong and Hugo van Heijningen, Co-founders of Amsterdam’s Red Light Radio, will be flown out to the International Radio Festival in Zurich later this year as winners of the Best Radio Station award. “When we had just started with RLR almost 5 years ago, we were amazed to be invited to the International Radio Festival. It was the first Red Light Radio trip abroad and a lot has happened since. We are very honoured to have won the award now 5 years later and are excited to come back to the festival.”

About the International Radio Festival (IRF)
Founded in 2010, the IRF is a Zurich-based organization, being the FIRST and ONLY international radio festival of its kind, celebrating the world’s most consumed medium — Music Radio. A must-attend event, the IRF brings together Music Radio Anchors, Radio Programming Heads, Record Labels, Music Managers & Agents, Lifestyle Brands/Services and their Marketing & Advertising Agencies, Media Professionals and Educational Establishments. The IRF is the key place where the Music Radio world comes together to celebrate and showcase some of the best music programmes, to deliberate and collaborate, to network and to discover trends about their Industry. The IRF was as a finalist in the 2011 British Swiss Business Awards, and invited by the Swiss Federal Government to be part of their presence during the 2012 London Olympic Games – they will also be at the 2016 Rio Olympics.
www.internationalradiofest.com

About Mixcloud
Mixcloud is the world’s leading platform for on-demand radio. Inspire you ears and discover new music & ideas from a community of over half a million recognised DJs and radio presenters. With a growing reach of over 10 million monthly listeners, the award winning service is available on the web and on-the-go through free mobile apps. By partnering with innovative brands such as Red Bull, Adidas and Coca Cola, Mixcloud has been instrumental in pioneering branded content and native advertising around music and radio formats.
www.mixcloud.com