World-renowned DJ and production duo Tale Of Us have revealed their 2018 Ibiza plans for their acclaimed party series Afterlife. Whilst they will be returning to the original place where the residency was launched under its current guise of Hï Ibiza, the parties themselves promise something different and adventurous. The residency will be taking over both rooms, with music and production concepts designed for each space. 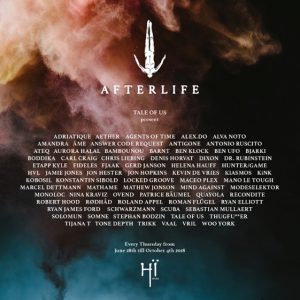 Visuals, bespoke lighting, installations and tailor-made production will play a large part in the residency, in line with Tale Of Us’ increasing interest in the wider spectrum of arts. Add to that the now-iconic Afterlife man insignia above the dancefloor, state-of-the-art sound and a meticulous attention to aesthetic detail, partygoers will have a unique and all-encompassing experience.

The lineup has been carefully curated into a singular musical journey, and also includes renowned visual artist Quayola. Whilst some of the most popular names in Ibiza are in attendance – Dixon, Nina Kraviz, Maceo Plex and Ben Klock to name just a few – the residency is notable for its large roster of underground and upcoming artists, some of whom have never played Afterlife before, such as Jon Hopkins. Tale Of Us have also tapped genuine pioneers of the scene; Carl Craig, Robert Hood and Alva Noto (who plays a special live concert) will appear alongside Afterlife regulars like Mind Against, Agents Of Time, Adriatique and Woo York.

Running every Thursday from the 28th June right through to the 4th October, Tale Of Us’ Afterlife 2018 looks set to be a game-changer for Ibiza. With more details and lineup breakdowns still to be announced, as well as an elegant series of artworks commissioned for the season, this residency will cement Tale Of Us’ reputation as forward-thinking curators in addition to their well established status as genre-leading producers and DJs. 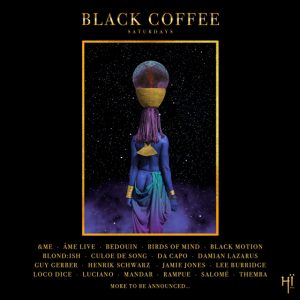 After setting a new benchmark in 2017, Black Coffee’s Hï Ibiza residency is back once again in 2018 and now the next wave of acts for the 2018 season line-up for the world-class party can be revealed.

At the centre of each party will be Black Coffee himself, the South African house artist who has established himself as a pivotal figure in the global scene. His productions include collabs with the likes of Drake, his fans include P. Diddy and his discography includes essential works like his award-winning Pieces of Me album. His DJ sets are sophisticated and colourful affairs laden with Afro samples, deep house grooves and throbbing drums that take cues from a wide sphere that takes in everything from Motown to soul, so really bring something new to the White Isle.

This first wave of names boasts plenty of acclaimed stars. Innervisions’ main men Âme bring their impeccable live show and offer a spine tingling take on emotive deep house, while chief label artist Henrik Schwarz brings his jazz tinged house sound. Then comes Jamie Jones, whose deep tech house sound has become the defining genre of the last few years thanks to his own productions and famous Paradise parties. Desolat label boss Loco Dice is another internationally acclaimed artist with his own unique sound that fuses big, chunky drums with his own love of hip hop and house, and Cadenza label boss and long time minimal maestro Luciano always threads together the sort of infectious sets of techno, Latin percussion and stripped back house that sends crowds wild around the world.

Finally, as previously announced, London based DJ collective and label bosses Housekeeping will begin their season-long Saturday residency in the Club (Room 2). Housekeeping’s sell-out London shows have featured many acclaimed DJs, including Black Coffee himself, and the Housekeeping collective have played at some of the biggest international parties. Having captivated Hï Ibiza audiences in 2017 with their deep and hypnotic sets fused with tribal percussive elements, 2018 is set to be a big year for Housekeeping.

The home for all this musical magic is the already hugely influential Hï Ibiza. A slick club and cavernous space that boasts a powerful and state of the art sound system, LED lit dance floors and flamboyant dancers that all add plenty of visual colour and character to every party.

With further names to be announced, this is already shaping up to be one of the most essential residencies in all of Ibiza for summer 2018.

BLACK COFFEE AT HÏ IBIZA
EVERY SATURDAY, FROM 26 MAY – 6 OCTOBER