Influential Manchester duo Solardo today reveal the impressive roster of guests that will be joining them for their hugely anticipated Club Solardo takeover in Hï Ibiza’s much-loved Club room. The 12-week residency runs from July 10th – September 25th, and while Eric Prydz, Cristoph and Camelphat play in the Theatre each week, Solardo will be joined in their room by the likes of Mason Maynard, Lauren Lane, Monki, Huxley, Secondcity, Pirate Copy, Dense & Pika, Pirupa and many more.

Solardo are one of the hottest names in house music right now. Back in 2017, the globe-trotting duo served up some hugely memorable sets at Hï Ibiza and pulled in big crowds who were desperate for their piece of the action. The taste-making pair run their own Sola label and have also released their infectious brand of house on labels like Hot Creations and the mighty Relief Records, so bring with them super fresh sounds and plenty of new energy.

Given Hï Ibiza’s iconic Club room to programme, the pair prove they really have their finger on the pulse with a mix of acclaimed artists and next generation stars. It all kicks off on July 10th with Solardo playing an extended set with DFTD and Sola artist Mason Maynard and Dutch born Ibiza star Chelina Manuhutu joining them. The following week, Spanish tech titan and one of the most charted artists in the game Dennis Cruz joins the party with MadTech and big festival regular Max Chapman and C.O.Z, then the rest of the month sees contemporary house hero Lauren Lane, Hot Creations’ Kevin Knapp, Brazilian selector Volkoder and BBC Radio 1 presenter/DJ Monki all set to perform.

August brings an as yet unannounced special guest, a return for Mason Maynard and Chelina Manuhutu plus the likes of ANOTR, party pumping house and garage fusionist Huxley, raw as you like house pair Pirate Copy, Eli Brown and the omnipresent Chicago born artist Secondcity. High impact techno duo Dense & Pika, another Hot Creations regular in Mark Jenkins, Italy’s Desolat artist Pirupa and finally an extended Solardo set at the closing party round out a very special September.

All this means that the Club is sure to be an essential place to visit for real house music lovers this season, especially given that world-class residents Eric Prydz, Cristoph and Camelphat will all be playing next door in the Theatre each week of summer. 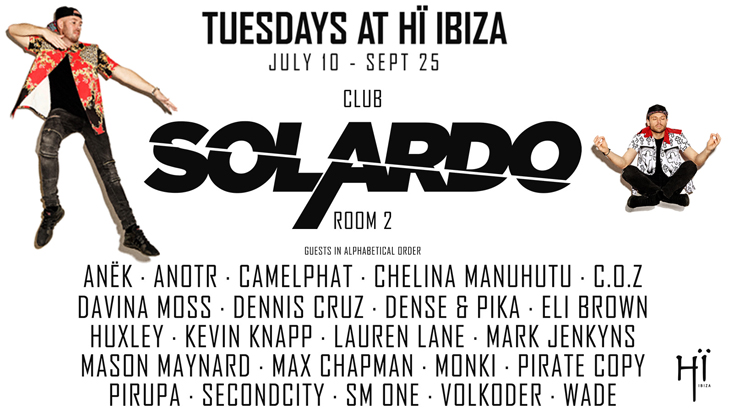 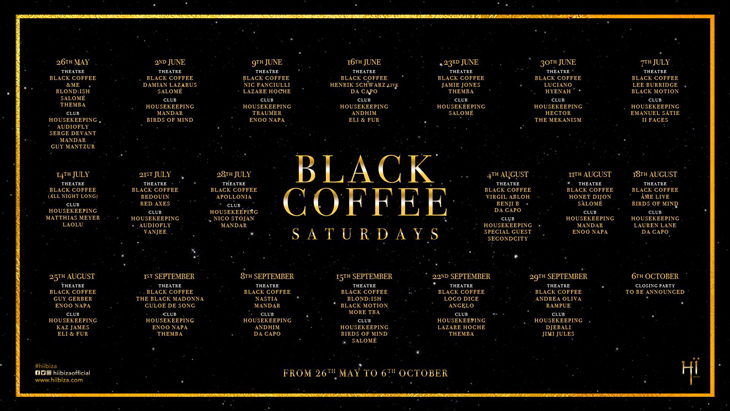 Black Coffee’s debut residency last season was one of the most talked about parties of the summer. With the main man himself serving up steamy sets of house music with intoxicating rhythms and real depth, he was the backbone of each night while world class guests all came and served up their A-game in the always immersive and escapist atmospheres of the revered Hï Ibiza. This summer he is sure to step it up once more, playing the Theatre each and every week with more cultured line-ups covering everything from deep house to techno, disco to minimal. Watch out for a very special all night set from the South-African house hero on 14th July.

With just a matter of weeks to go until Black Coffee embarks on another much anticipated season, his party looks set to raise the bar once again in 2018.

BLACK COFFEE AT HÏ IBIZA
EVERY SATURDAY, FROM 26 MAY – 6 OCTOBER 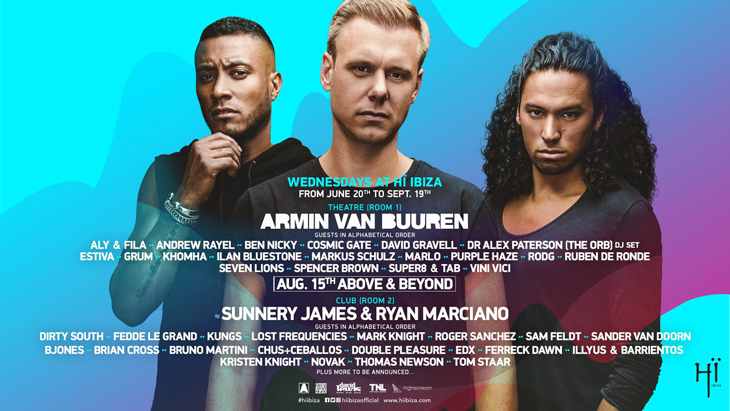 Hï Ibiza continues to set a high benchmark today with the unveiling of the world-class names that will play with Armin van Buuren and Sunnery James & Ryan Marciano at their sure to be spectacular residency which runs every Wednesday from June 20th until September 19th. As previously announced, Armin will once again take control of the Theatre whilst Sunnery James & Ryan Marciano host the Club each and every week. Playing with them across both rooms of the avant-garde venue will be international superstars like Aly & Fila, Andrew Rayel, Dirty South, Fedde Le Grand, Lost Frequencies, Mark Knight, Markus Schulz, Roger Sanchez, Sander van Doorn and Vini Vici. All this and more, plus Above & Beyond will host a very special takeover of the Theatre on 15th August.

Armin van Buuren makes a heroes return to the Hï Ibiza Theatre this summer. Last year, the Grammy-nominated star left an indelible impression and Tuesday nights at Hï Ibiza fast became one of the club’s most popular residencies thanks to its explosive soundtrack, supersized production and immersive visuals. With another series of high octane sets he is sure to be captivating clubbers throughout the summer. Joining him in the Theatre across the season are acts including Aly & Fila, Andrew Rayel, Cosmic Gate and Markus Schulz. Rising stars of the scene, Vini Vici, MaRLo, Ben Nicky, David Gravell and Seven Lions also star, plus party revellers can look forward to a set from Sander van Doorn’s alter ego Purple Haze. Masters of progressive trance, Estiva, Ilan Bluestone, Ruben de Ronde and Spencer Brown also join the bill. Watch out for two very special shows across the season, including August 1st, when Armin will play a solo set, serving up a very special musical trip; and August 15th, when Above & Beyond – one of the world’s leading electronic music acts and owners of the Anjunabeats and Anjunadeep labels – will take the reins for an exclusive headline performance.

Meanwhile, the Club offers a different sound thanks to house innovators Sunnery James & Ryan Marciano. With a long-standing background in house music, they have the knowledge of the genre and its roots at their core, and this foundation informs their eclectic sounds. Blending elements of house, tribal, techno, electro, Latin flavours and more into their productions and DJ sets, theirs is a sound which looks both to the past and to the future with plenty of groove at its heart. Hosting the intimate Club room throughout the summer, the Dutch powerhouse duo will be joined weekly by big-name guests, including big room pin-up Fedde Le Grand, Belgian hit-maker Lost Frequencies, Toolroom Knights empire head Mark Knight and enduring house pioneer Roger Sanchez. Dutch globetrotter Sander van Doorn also get in on the action, with more from Sam Feldt, Kungs, Dirty South, EDX, Chus+Ceballos and plenty of other talented artists.

Once again then, Armin van Buuren and Sunnery James & Ryan Marciano’s party at Hï Ibiza is set to be a world-class summer party. 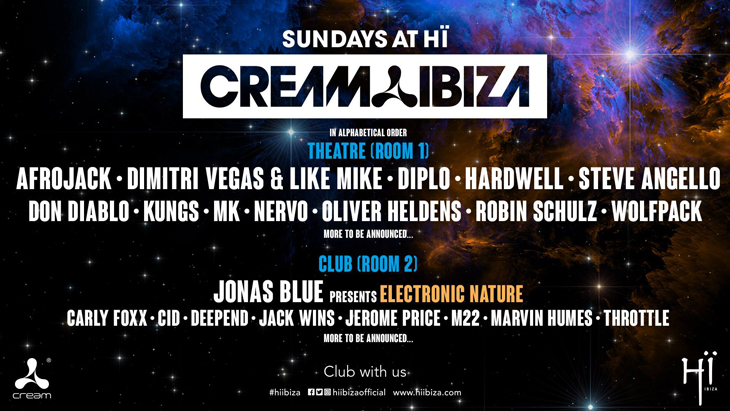 Cream Ibiza moves to its shiny new home at Hï Ibiza this summer and having already confirmed three electronic music heavyweights, namely Diplo, Hardwell and Steve Angello, as party regulars, the esteemed club brand can now reveal the next wave of big-name acts set to join them. Many of the world’s biggest DJs are confirmed to play each and every Sunday from 24th June – 23rd September including performances from Afrojack, Dimitri Vegas & Like Mike, Don Diablo, MK, NERVO and more in the Theatre, along with Jonas Blue hosting the Club room with his Electronic Nature concept each and every Sunday.

As the island’s longest running UK club night, Cream continues to be a must-visit party in Ibiza each year, with 2018 already looking set to continue the trend. Throughout the summer, Hï Ibiza will play host to Cream’s ongoing reputation for delivering some of the biggest names in dance music, mind-blowing production, a devoted crowd, and an unbeatable atmosphere.

Hï Ibiza’s Theatre will play host to regular chart topper and big room legend Afrojack, along with Dimitri Vegas and Like Mike, two acts that never fail to serve up explosive sets with plenty of huge vocals and crowd participation. House hero MK also stars. A prolific producer, as well as working alongside chart-topping acts like Rihanna and Jay Z, he’s produced some of house music’s most recognisable grooves. Dynamic Dutchman Don Diablo also joins the bill, along with French selector Kungs and effervescent Australian twins NERVO. They’ll be joined by two artists that are no stranger to the Theatre, Dutch DJ / Producer du jour Oliver Heldens and German producer Robin Schulz. Rounding out the first wave of acts for the Theatre, it’s a Hï Ibiza debut for Belgian duo Wolfpack who continue to go from strength-to-strength as they maintain their meteoric rise to the top.

With such an impressive roster of guest acts, not to mention Cream Ibiza’s long-established residents Anthony Probyn, Gareth Wyn, Andy Mac and Sean Hughes,  plus Hï Ibiza’s world-class soundsystem and mesmerising production, the 2018 Cream Ibiza season is shaping up nicely. For the complete week-by-week line-ups visit the Hï Ibiza website, and be sure to keep an eye out for more news coming soon.

Tickets for all events and more informations at hiibiza.com.