Together with 30 European radio stations ESNS (Eurosonic Noorderslag) has announced the first artists for its upcoming edition in 2018. For each country, the acts are selected in co-operation with the national radio broadcaster. 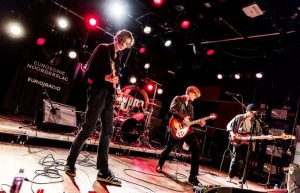 ESNS will take place in Groningen (The Netherlands) from the 17th to 20th of January 2018, with Denmark named as the country in focus, and with participating radio stations making live-broadcasts throughout the event. Alongside that, Groningen will be welcoming hundreds of journalists, TV stations and bloggers, making ESNS the most important European media event for music.

About ESNS
Eurosonic Noorderslag (ESNS) is the key exchange for emerging European music talent, with a proven track record of helping to break new acts on the international music scene. These include Alma, Ásgeir, Aurora, Dua Lipa, Hozier, HER, Mø, My Baby, Rejjie Snow, Lost Frequencies, Roosevelt, Royal Blood, Seinabo Sey and Vök, all of whom played at ESNS as up and coming talents. The event attracts more than 4,000 conference delegates from all sections of the entertainment industry, including representatives of over 400 festivals. Each year, ESNS stages more than 350 showcases alongside offering a full conference programme of around 150 panels, and keynotes, alongside multiple networking opportunities. The event also hosts annual meetings, pitch sessions, networking dinners, parties and the very latest thinking and technical innovation in the music, media, interactive and production industries. This edition Denmark will be the ESNS focus country.

Delegate Registrations
Conference registrations for Eurosonic Noorderslag can already be purchased on the festival’s website. Festival tickets will go on sale later in the year.
www.eurosonic-noorderslag.nl