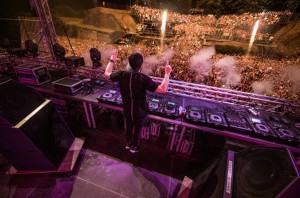 Filatov & Karas, Goldie, Shy FX & MC Stamina, S.A.R.S. and Who See also set to arrive at Jaz Beach!
The author behind the most important tracks in electronic music, and the musical force of the legendary group Faithless, Sister Bliss arrives to the Dance Paradise stage on 14 July, performing on the third day of the Sea Dance Festival. This renowned artist from London is responsible for creating the music for electronic anthems “God is a DJ”, “Insomnia”, “We Come 1”, “Music Matters”, “Salva Mea” that allowed Faithless to enter modern music’s hall of fame as one of the most important bands in the history of the genre, selling over 15 million records worldwide.

The performance on Jaz Beach has also been confirmed by the best Russian DJ duo Filatov and Karas, creators of the remix “Don’t Be So Shy”, which has over the last six months grown into one of the biggest hits on the planet, conquering music charts all over the world. They will be joined by the Belgrade group S.A.R.S., who are celebrating 10 successful
years on the music scene at Sea Dance Festival. Arriving to Jaz Beach are also the leading stars from the bass scene, the cult DJ and producer, actor and visual artist Goldie, as well as the leader of the new drum & bass sound Shy FX, accompanied by the famous MC Stamina. Winners of MTV’s Best Adria Act Award and darlings of the regional audience, Kotor’s hip-hop dream team Who See will once again play hosts on the main festival stage.

Get ready for best festival summer adventure. Join us on the magical EXIT adventure. Two festivals in two countries at two spectacular locations! From the magical fortress in Novi Sad to the Best European beach by Lonely Planet! Come party with us, adventurous ones…  BOOK NOW!

About Sea Dance Festival:
Sea Dance Festival is an award winning music festival which is held at Jaz Beach in Budva, Montenegro since July 2014. The festival has been part of the EXIT Adventure, representing an additional 3 days of EXIT Festival.