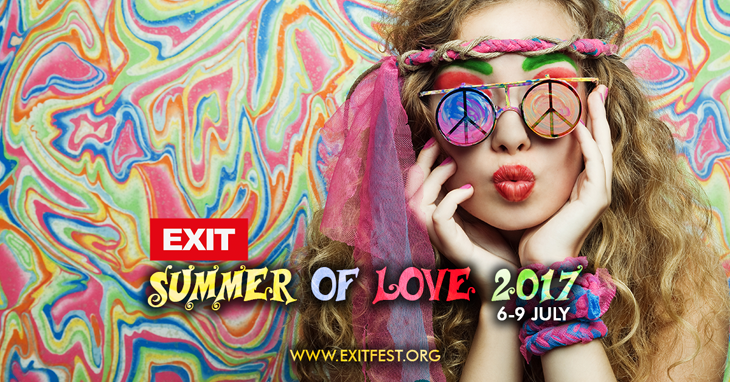 After its busiest year, EXIT Festival celebrates 50 years of the Summer of Love in 2017!
EXIT 2017 from 6th – 9th July – Early-Bird tickes registration begins.

After this year’s record-breaking attendance in 16 years of its existence, EXIT Festival 2017 will celebrate the 50th anniversary of the Summer of Love! Next year, EXIT will mark some of the most important events from 1967 when the revolutionary Peace Movement began and changed the world forever. This social phenomenon gathered people from all over the world around the idea of community, peace, solidarity and love; it held in immeasurable influence over contemporary music as well as culture at large. The peace sign, colourful clothes and flowers in hair are the first things that come to mind when talking about the Summer of Love, whilst its vast legacy embodies the universal quest for peace, freedom of speech, human rights, and social, racial and gender equality.

“The Summer of Love symbolises the beginning of the hippie movement that changed contemporary music forever and gave birth to modern music festivals, whose aim was to fight for peace and to change the world through music and celebration of life. Similarly, EXIT was founded from the resistance youth movement that was fighting for peace and freedom in Balkans 16 years ago. It’s one of the rare active music festivals that still nurtures the legacy of the early contemporary music festivals from late 60’s and early 70t’s that first and foremost were founded because of strong social agenda. That’s exactly why we believe it is our duty to remind the world of the events that happened 50 years ago and spread once again the Peace Movement’s messages – which are desperately needed in today’s world, now even more than ever,” said the founder of the EXIT festival, Dušan Kovačević.

The culmination of the grand anniversary will take place at the EXIT festival, 6 – 9 July, at the Petrovaradin fortress, one of the largest ones in Europe, settled in the city of Novi Sad in the northern Serbia. Fans from all over the world can already apply today to get the lowest-priced „early-bird“ tickets, that will soon after be on general sale. The number of these first tickets is extremely limited, so hurry up and reserve your spot at the upcoming EXIT Summer of Love 2017 HERE!

This year’s EXIT Adventure, which is a name of the unique festival holiday package that is comprised of two award-winning festivals, EXIT and Sea Dance, held on two spectacular locations in two neighbouring countries, took over 270.000 visitors, from more than 60 countries, on a summer festival journey. From the colossal Petrovaradin fortress in Serbia to the stunning Jaz Beach in Montenegro, they spent four days and nights at EXIT festival, then another three more at Sea Dance festival listening to some of the most sought-for global music acts. The Adventure onboarded its first passengers in Novi Sad and took them to indie-pop princess Ellie Goulding’s firework-infused show, preceded by the British rockers Bastille. The title of the first amongst equals on the second night was won by the absolute hitmaker David Guetta, thanks to an audio-visual spectacle that’s rarely seen in anyone’s lifetime! EXIT’s Main stage looked lit, like a huge machine that birthed special versions of the biggest pop and dance hits in an endless, glittering mix. The huge party at EXIT’s Main Stage was also heralded by the funk doctor George Clinton, backed by the numerous members of the Parliament-Funkadelic, while with unbelievable ease Wiz Khalifa confirmed the status of the world’s no.1 hip-hop performer, by putting on a show that is possible only for someone who’s at the very peak of their career. Khalifa’s charisma even caused the show to pause at one moment so the audience could chant his name for almost 5 minutes! Popular English indie-rockers The Vaccines lived up to pretty big expectations, along with the punk legends Cock Sparrer, guitar rebels Tinariwen, and – to utterly no one’s surprise – The Prodigy, the favourites of the EXIT fans, who caused an unprecedented eruption of energy. This unfathomable chemistry between Liam, Keith and Maxim and 55.000 people in the audience led to a record-breaking evening on the final night, and crowned it as the day with the most visitors at the fortress, ever!

Meanwhile, around 25.000 people greeted the sun each morning at the world-renowned Dance Arena with the first-ranking duo at Top DJ Mag’s list, Dimitri Vegas & Like Mike, as well as Ibiza’s kings Solomun, Maceo Plex, Richie Hawtin and Marco Carola, as well as countless other stars like Nicky Romero, Dave Clarke, Nina Kraviz, Oliver Heldens and many others. The No Sleep Novi Sad stage had its four wild nights and morning curated by the Europe’s leading underground clubs Nitsa, Tresor, Concrete, Grelle Forelle i Drugstore, with set by the likes o f Moritz von Oswald, Tommy Four Seven, Rebolledo, Powell, Dasha Rush, Zadig, Cassegrain and many more! At the Explosive stage, fans of furious riffs headbanged with Paradise Lost, At The Gates, Anti-Flag, Raised Fist, Toxic Holocaust and many others. During the four days of the festival, over 195.000 visitors ventured through its gates, and all stages were packed with smiling people, which was best witnessed by David Guetta’s quote during the unprecedented spectacle at the Main stage: “Thank you EXIT, I have enjoyed here before, but I think that this year is better than ever!”

After four unforgettable days in Novi Sad, fans have travelled south to the gorgeous Jaz beach, Montenegro, where another three exciting days and just as many nights awaited at the Sea Dance, the festival bathed in the glistening reflection of the morning sun on the high seas of Jadran’s turquoise waters. The beach chapter of the EXIT Adventure welcomed the great performances by Stereo MCs, Andy C, Black Coffee, Sister Bliss, Jeff Mills, Banco de Gaia, Zomboy, Goldie, Sub Focus, Shy FX, Marko Nastic and many others. However, the throne of this year’s performer’s list was deservedly won by Skrillex, who, like during EXIT festival two years ago, after the colossal spectacle at the Main Stage, walked over to the Dance Paradise stage, and held a surprise back2back DJ set with one of the leading Montenegrin house masters, Mr. Jools! Not even Olympic record-breakers would attempt to jump above a bar set so high, yet that’s exactly what the lads from Manchester did. Nothing is impossible for Hurts who, on the final evening of the festival at Jaz beach, showed that the heart is the biggest asset in every finale! They confirmed as much by saying: “We’ll cherish this night forever, and we’ll come back to you, because you’ve got something that’s slowly fading away in this world – a heart and soul!”