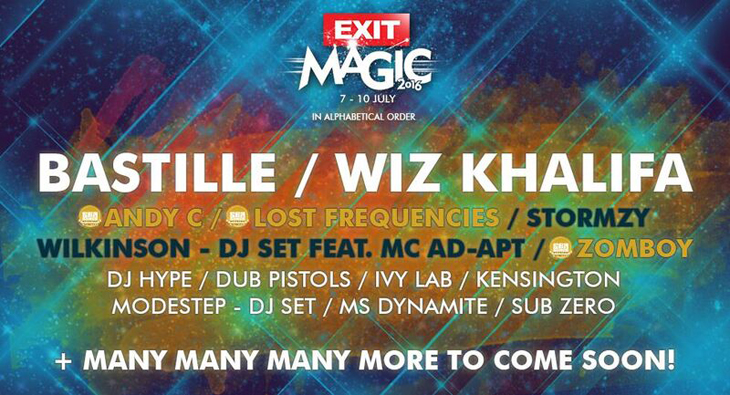 One of the biggest hip-hop stars of today, Wiz Khalifa will perform Exit Festival on July 10th! Khalifa is at the peak of his ever-rising popularity after heading most of this year’s charts with “See You Again” which is one of three most viewed videos of all time! Adding up to three billion YouTube views, Pittsburgh rapper is one the most popular artists in the world known for collaborations with Bruno Mars, The Weeknd, Snoop Dogg, Miley Cirus, Maroon 5, Lily Allen, will.i.am, 50 Cent and numerous others. Khalifa has been nominated for ten Grammies, including the Song of the Year, which secured him a performance at Times Square NYE! Indie rock attraction Bastille are joining the Exit’s bill for festival’s openning on July 7th. The London-based quartet has swept the planet with their hit-singles “Pompeii”, “Things We Lost in Fire” and “Oblivion”, pushing their debut album “Bad Blood” to tje the top of the UK Albums Chart, followed by the BRIT award for the British Breakthrough Act. The world music scene eagerly awaits their new album, set to be released next year which only lucky fans at Glasto got to preview at a secret gig!

The most talked about MC of this year, a MOBO award winner Stormzy will perform on July 10th July at Exit’s Main Stage. He owns the first ever freestyle single that entered UK chart’s Top 10. Stormzy’s unstoppable force proved with his campaign to get his grime anthem “Shut Up” at the top of the UK Singles Chart on the week of Christmas Day, usually taken up by one of X Factor stars, such is Louisa Johnson who has already fallen behind him along with One Direction!

Exit Magic Adventure 2016 – New Lineup Additions:
Travellers for both Exit and Sea Dance are in for another ultimate X-Bass Adventure in partnership with UKF. The magical Petrovaradin Fortress will host Playaz 20th Anniversary lineup at Exit’s opening night with DJ Hype, Ms. Dynamite and Sub Zero joining the bill. Exit will also host the most demanded DJ sets of Wilkinson, Modestep andIvy Lab trio (Sabre, Stray and Halogenix). Festival goers at spectacular Jaz Beach are in for a treat as Andy Cpremieres at Sea Dance too with many more acts soon to be announced!

Fusion, the second biggest live stage at Exit, will host the forefathers of the dub genre, Dub Pistols on Saturday, 9 July! Last year, the band returned to the scene in grandiose style, “Return of the Pistoleros”. The same place will be coloured by the sounds of the popular Dutch indie rock band Kensington, presenting their work to the audience on Friday, 8 July with their latest album “Rivals“.

One of the leading dubstep DJs and producers, Zomboy, continues his journey through the Exit Adventure and after this summer’s smashing set Exit, he’ll be heading south to Sea Dance, for an equally euphoric festival closure! After “Resurrected”, an album that won the hearts of millions of fans, this 25-year old mixing virtuoso from England had the opportunity to collaborate on remixing some of the biggest players like DJ Fresh and Flux Pavilion, and of course, his mentor Skrillex!

The award-winning Sea Dance Festival will also have a grand opening with the Belge hitmaker Lost Frequenciesmaking everyone singing on 14 July! Huge summer hits, “Are You with Me” and “Reality”, will echo throughout the Adriatic coast in a special sunset set. These two singles were among some of the most listened tracks this year, joining the likes of digital chart toppers Wiz Khalifa, Ellie Goulding, Kygo and Feder!

Exit Festival, combined with its seaside sister Sea Dance Festival, makes for the perfect festival package dubbed theExit Adventure, created to be the biggest and longest-lasting festival holiday in whole world that spans over 10 days! This unique package combines two award-winning festivals at two spectacular locations in two neighbouring countries, which proved to be a success formula that attracted 300.000 people from 60+ countries who have traveled from magical Petrovaradin fortress in Serbia to stunning Jaz Beach in Montenegro. While Petrovaradin fortress is the biggest defensive fortification in Europe, Jaz is officialy the best European beach according to leading tourist guide Lonely Planet.

The special Xmas offer: Buy 4 tickets and get 1 as a gift!
Before Christmas, tickets for Exit Festival will still be available at the special price of 110 € +b/f, which is a 40% discount from the final price! On top of that, everybody who buys tickets in this offer will get Sea Dance festival ticket as a gift! A limited number of tickets are available online at Exitfest.org. Travel packages at the special price starting 149 € with tickets, accommodation and airport transfers are available at Exittrip.org.