EXIT FESTIVAL 2019 ADDS GRETA VAN FLEET, PHIL ANSELMO AND MORE TO THE LINE UP LEAD BY THE CURE

EXIT FESTIVAL 2019 ADDS GRETA VAN FLEET, PHIL ANSELMO AND MORE TO THE LINE UP LEAD BY THE CURE

Each summer, thanks to EXIT Festival, the colossal Petrovaradin Fortress in northern Serbia becomes a place of music pilgrimage for people from all over the world, and judging by the early bird ticket sales, it will be once again filled to the brim from July 4th to 7th next year!

Already announced rock giants The Cure will be joined by one of the most impressive rock bands of today, Greta Van Fleet! The unstoppable quartet from Michigan has stormed the world with such rock bravado that even Robert Plant confirmed them as today’s incarnation of Led Zeppelin while Elton John said he did not see such energy in this whole century! Young rockers sold out their entire American tour, playing at gigantic stages of Coachella, Lollapalooza and Rock Am Ring, while their debut album reached the top of the Billboard charts only this month! EXIT also welcomes Phil Anselmo, the legendary frontman of Panterawhose biggest anthems will be played live in a set symbolicaly named after the band’s best selling albums – A Vulgar Display of 101 Proof! Another inimitable metal vocal Tarja Turunen, ex-singer of the legendary Nordic band Nightwish, also joins EXIT lineup, together with other furious acts like Norwegian metalheads Arcuturus or the pioneers of the Swedish metal scene Entombed A.D. This proper guitar army grows even bigger with ska kings The Selecter, famed British punks Peter and the Test Tube Babies, and Californian hardcore veterans Total Chaos! 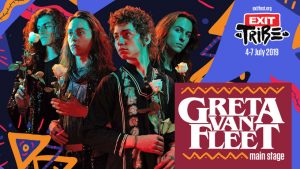 Greta Van Fleet, a band consisting of three brothers and their childhood friend, remind us of the very essence of rock’n’roll with every new performance: riffs that take over the body, bass and drums that drive it and a powerful voice that confirms the eternal life of rock’n’roll. The average age of band members is barely over 20, yet they have already conquered the American charts, with their debut album „Anthem of the Peaceful Army“, unveiled in October, which has already found itself on the top of Billboard Hard Rock and Top Rock lists, and took a very high third place on the general Billboard 200 album chart that has been dominated exclusively by pop artists in this century. The fierce vocals of 22-year-old Josh Kiszka captivate at first listening, and the ease with which he sings even the most difficult parts is enough to cause disbelief and comparisons to living rock god and Led Zeppelin frontman, Robert Plant! In an interview this year, where he was asked to point out his up-and-coming music favorites, Plant said: “There is a band in Detroit called Greta Van Fleet. They are Led Zeppelin I and they have a beautiful little singer”, and when the journalist said that it is incredible that someone that young can have such a huge voice, Plant jokingly added: “I hate him” The seal of approval for Greta comes not only from Roger Glover, the bassist of Deep Purple, and famous actor Tom Hanks, but also from music icon Elton John, who personally called them and said: “This is the best rock’n’roll I’ve heard in the last 20 years” Greta Van Fleet stirred the stardust last year, with their hit “Highway Tune”, the first of their three singles that reached first place on the Billboard rock chart, the last one in line being their newest hit, “When the Curtain Falls”. Their explosive success, the likes of which have not been seen for a long time, brought them to the prestigious Forbes magazine list “30 under 30” and gave them Loudwire Magazine’s award for Best New Artist!

Main Stage of EXIT Festival and the ground around it will be shaken by metal legend with a powerful vocal of ex-Pantera singer, Phil Anselmo, along with his new band The Illegals, and this performance, consisting only from Pantera songs, will be a must see for all true metal connoisseurs! Phillip H. Anselmo & The Illegalshave published their second album this year, “Choosing Metal Illness”, rich with doom, thrash, punk and grindcore influences. The final product, full of distortion and Anselmo’s dominating vocals invokes the revolutionary sound of Pantera that irrevocably lifted the bar of the entire metal scene and retained its status as one of the best metal bands in the history of music.

EXIT Festival greets another figure that participated in the permanent shaping of the metal scene, Tarja Turunen! The ex-frontwoman of the best-known Finnish band, Nightwish, combined her operatic vocals and metal sound, bringing to life and popularizing an entire genre. After leaving the band, she dedicated herself to a successful solo career and her album “The Shadow Self”, published in 2016, found itself on the tops of rock and heavy metal charts on iTunes in several countries! This year’s undertaking, the live-art album “Act II (Live)”, apart from the effortless “switching” between the intimate and the grandiose, confirms that Tarja is one of the best live vocals ever to come out of Scandinavia.

The Petrovaradin Fortress and its fiercest stage, Explosive, will be conquered by the avant-garde black metal band and renowned member of the Norwegian music scene, Arcturus, as well as the pioneers of Sweden’s death metal scene Entombed A.D. Apart from them, three legendary bands are arriving to celebrate three awesome anniversaries! Two British bands, ska legends The Selecter and prominent punks Peter and the Test Tube Babies are coming to EXIT celebrating 40 years of tireless performances, while Californian hardcore punks, Total Chaos, arrive in the year when they mark three decades of music!