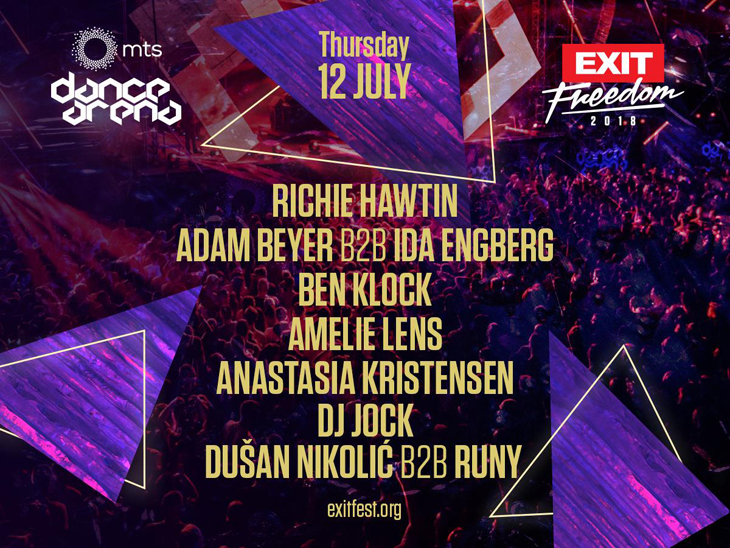 The collosal Dance arena will open it’s gates in 2018. for it’s massive line up so far. A whole new era begins for Exit Dance Arena in 2018 with THE HEROES of #TECHNO at the opening night on July 12th! We will be welcoming the pioneer and leader of the global techno movement, Richie Hawtin, techno power couple Adam Beyer and Ida Engberg, the absolute symbol of Berlin scene, Ben Klock, rising star Amelie Lens and the great techno talent Anastasia Kristensen! Regional and local support will include the rising Croatian DJ Jock, while Dušan Nikolić and Runy, the hometown duo from Novi Sad will ignite Arena’s spectacular machinery! And this is just the start. More acts coming soon.

Last summer, all eyes were pointed at the new, spectacular Dance Arena with it’s new awe inspiring stage design and light show.  The world renowned stage at EXIT Festival celebrated its first 15 years of existence that were filled with historical moments created by the party insatiable audience together with all the greatest DJs in the world.  This year, the Dance Arena will display even more innovations at the magnificent site of the colossal Petrovaradin Fortress in Novi Sad, Serbia from 12th to 15th July. For more details click here.

EXIT and its 5 FESTIVALS celebrate FREEDOM!

After EXIT celebrated 50th anniversary of Summer of Love in 1967 and the revolutionary „hippie“ movement that changed the world forever, in 2018 the festival will celebrate this movement’s foremost ideal: personal FREEDOM!

The first confirmed acts for EXIT and other festivals organized by the EXIT Festival Team, such as Festival 84 on Jahorina, Sea Star in Umag, Revolution in Timisoara and Sea Dance in Budva, will be announced soon. All festival lovers can expect a very genre-diverse line up that EXIT and its sister festivals are known for.

With one EXIT ticket, you go to five festivals!

After the EXIT Summer of Love gathered the four festivals in a row last summer, EXIT Freedom 2018 will represent an even greater festival achievement, putting together five festivals in five countries: EXIT, Festival 84, Sea Star, Revolution and Sea Dance.

All current ticket holders and future ticket buyers for EXIT festival will get free tickets to the remaining four festivals of the EXIT Freedom 2018 as a present. More info and tickets via exitfest.org.