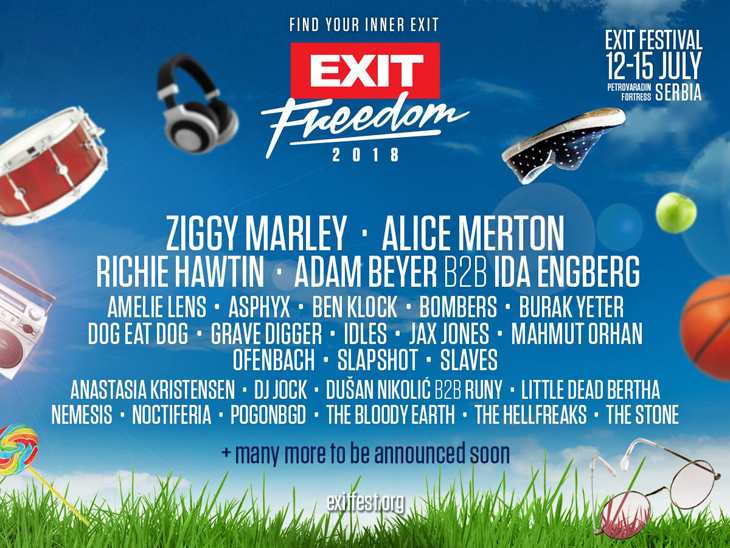 Shortly after EXIT gave glimpse at its starstudded techno lineup including Richie Hawtin, Adam Beyer, Ida Engberg, Ben Klock and Amelie Lens, the major music festival from Serbia continues to fill the gargantuan Petrovaradin Fortress with more acts. They are lead by the Jamaican reggae king, Ziggy Marley, 8-time Grammy winner whose father and undying icon Bob inspired EXIT Freedom, the festival’s 2018 theme. From 12 to 15 July some of the world’s hottest hits will be brought by Alice Merton, Jax Jones, Ofenbach, Mahmut Orhan and Burak Yeter. The fortress will also get raided by the punk, hardcore and metal bands, such as Dog Eat Dog, Slaves, Grave Digger, Slapshot, Idles, Asphyx and many others for both Fusion and Explosive stages.

The first to announce this years rich and diverse program of the Main Stage at the Petrovaradin fortress will be the living reggae king, Ziggy Marley! Even though his father, the eternal king Bob reigns supreme from above, his eldest son David Nesta, whom he nicknamed Ziggy after Bowie’s alias, enlarged the family heritage with 27 albums and 8 Grammys, like none reggae artists had won before him. Main Stage will host the unstoppable new generation rock artist, Alice Merton, whose “No Roots” anthem has conquered European and American top lists. The Canadian, who was brought up in Germany and England, has changed her address 12 times in her 24 years, and she turned the story of this nomadic existence into music, which has changed her life overnight.

Jax Jones is a house hitmaker, whose BRIT-nominated single “You Don’t Know Me” has kidnapped the radio waves throughout the whole year. The tireless Englishman continues with “Instructions” featuring Demi Lovato and the current single “Breathe”. What it feels like to hear your song played at every corner is well known to the French duo** Ofenbach**, whose hit “Be Mine” marked the summer. The idea of mixing rockabilly with house music brought the much-needed freshness into summer months, while their current hit-single, “Katchi” is keeping the winter days quite warm! Straight from the Sea Star and Sea Dance festivals Mahmut Orhan arrives at EXIT with megahits “Feel” and “Save Me”, along with the Game of Thrones main theme remix, the inescapable beach bar track from the last summer. He will be joined by the equally popular Dutch hit-maker, also of Turkish origin, Burak Yeter, whose club anthem “Yesterday” keeps the global dancefloor in constant hypnosis for almost a year now!

Fusion, one of the favorite stages of the EXIT Festival, will echo the punk sound of guitar bands of today! The young Kent punkers Slaves, were best described by The Guardian – a band that appeared with “primal songs that throw together punk existentialism, sketches of suburban life and absurd narratives about manta rays and sasquatches in noisy three-minute bursts“. They bring their energetic punk-torpedoes to EXIT in the form of “The Hunter” and “Cheer Up London” etc. Bristol punk sensation, Idles, exploded last year, conquering the audiences and the critics with their first album, “Brutalism”. The Guardian called them furious and thrilling, „an inchoate cry of rage, with guitars that could raze the city“, while BBC included their album among their choice of albums of the year! Just how much of a “boom” they created can be seen from the fact that Foo Fighters invited them to be their only opening act in the London O2 arena!

Explosive stage has always been known for its furious program, but this time the audience will be shaken to the core by the hardcore rap of Dog Eat Dog, German heavy-metal pioneers Grave Diggers, as well as the world-famous Bombers – a Motorhead tribute band, whose members are the stars of the world black metal scene – Abbath from ex Immortal on bass, Tore from Old Funeral on guitar and Pez on drums! Among the explosive bands to conquer this stage is the legendary Boston hardcore pioneers – Slapshot, death metal icons Asphyx! EXIT Festival will host one of the ultimate psychobilly bands The Hellfreaks, Slovenian industrial metal Noctiferia, Russian gothic doom band Little Dead Bertha and the local mainstays The Stone, The Bloody Earth, Pogonbgd and Nemesis!

EXIT Freedom 2018 presents 5 festivals in 5 countries!
After the EXIT Summer of Love gathered the four festivals in a row last summer, EXIT Freedom 2018 will represent an even greater festival achievement, putting together five festivals in five countries: EXIT, Festival 84, Sea Star, Revolution and Sea Dance. Tickets are sold via exitfest.org, while the official tourist agency of the festival, exittrip.org, offers tourist packages containing tickets, as well as accommodation and transport options!