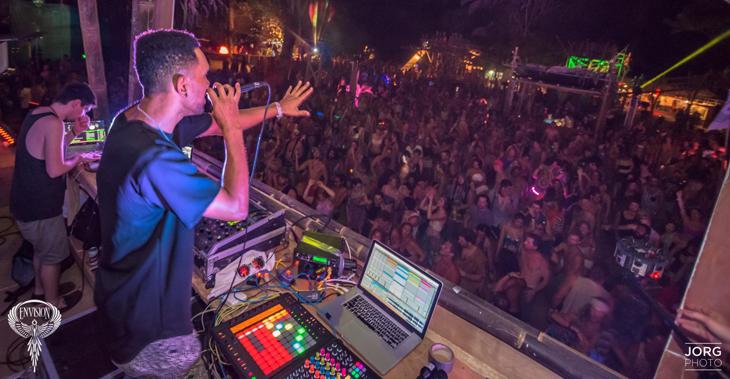 Envision Festival – Uvita, Costa Rica – Glistening beaches, resplendent jungles, and the “pura vida” mantra served as the backdrop for the sixth annual, sold-out Envision Festival as 4,700 international attendees descended upon Rancho La Merced in Uvita, Costa Rica this past February 25 – 28, 2016.Uniquely distinguished from any other festival on the planet, Envisionaries united to partake in the festival’s utopian permaculture community, which inspires self-expression and conscious living through its regenerative infrastructure. World-class curation of music, art, live performance abound as yoga/movement classes and innovative workshops maintain an inclusive harmony within the sold-out event.

Hailed as one of the most fascinating festival experiences this planet has to offer, Envision exploded to life as nature collided with art in the form of incredible stages, driftwood sculptures, bamboo jungle gyms, and scores of smiling faces lounging in hammocks and tree pods. Sun-kissed days filled with mind-expanding workshops, philosophical discussions, yoga classes, short walks to the ocean, or a drive to a local waterfall transformed into celebratory tropical nights with an intoxicating musical lineup performing on one of four dazzling stages – Luna, Sol, Lapa, and The Village Stage.

For a stunning first look into the essence of Envision – check out the beautiful Envision Festival 2016 recap video filmed and edited by Ari Fararooy.

Festival expansions also included an upgraded medical tent employing both Western and Eastern medical practices with a free herbal clinic offering herbal remedies and tonics alongside conventional treatments. For those wanting an upgrade to their camping experience, the La Sombra VIP Camping zone offered decked out tree house suites and canvas-wrapped bungalows in addition to 24hr concierge service, a salon boutique, and private bathrooms/showers. The newly erected Templo de la Tierra offered sacred fire ceremonies at sunrise and sunset or a quiet area to sit in meditation within the temple dome.

A pioneer in green festival design, Envision set forth environmentally sound initiatives throughout all aspects of the festival. Most Envision structure were built from bamboo and other locally-sourced materials (not a single metal framed vinyl tent could be found). A long-term lease on the property has allowed the festival to plant fresh banana, papaya, and other local ornamental flora to line pathways and provide natural fencing, unlike anything you’ve ever seen. Throughout the festival, all “single-use” cups and tableware were banned and replaced with reusable items and a festival-wide dish washing program, drastically reducing the amount of waste at the festival. Additionally, all generators were powered by bio diesel, a virtually unprecedented practice in Costa Rica.

Bass-heavy artists such as Shpongle, The Human Experience, Dimond Saints, Spoonbill, and CloZee, performed on an imported Funktion1 soundsystem on the impressive Luna Stage. Designed by visionary artist Carey Thompson, Luna bellowed in the form of a towering mariposa (butterfly), incorporating 3D projection mapping by the famed Mexico City artist, Golem. Performances were viewable across the expansive field, where attendees could climb a massive, multi-level bamboo jungle gym or witness visionary live paintings by global muralists Ernest Doty, Hazul, Mario Belem and Anderson Deberardi on the walkways leading to the Envision Art Gallery. Alongside the howler monkeys in the treetops, day-chasers welcomed the sun as they danced to Random Rab during his fabled, ethereal sunrise set.

Having successfully set itself apart from other music-driven festivals through its emphasis on soul empowerment and holistic living, Envision seeks to fulfill an inherent human desire to connect with like-minded individuals and feed the innate human need to be and live interconnected with nature. Don’t miss out on the chance to cross Envision Festival – Costa Rica off your bucket list. Tickets for the 2017 gathering taking place from Feb 23-26 are already on sale and are destined to sell out!  Visit the Envision website to grab your Envision 2017 ticket and start planning the trip of a lifetime to experience the wonder of Envision on the tropical pacific coasts of Costa Rica.