DGTL BARCELONA ROUNDS UP FULL LINE UP FOR 2016 EDITION

DGTL BARCELONA ROUNDS UP FULL LINE UP FOR 2016 EDITION

As summer is setting in we’re gradually approaching the date in August when DGTL will hold its second festival instalment in the historic city of Barcelona. With many of the acts already released – notable headliners being the likes of Dixon, Jeremy Underground, Robert Hood, Maceo Plex, Marcel Dettmann, Pan-Pot, Nina Kraviz, as well as a dazzling and highly anticipated b2b set between Jamie Jones and Italian maestro Joseph Capriati – DGTL still has a few secrets to reveal.

With the announcement of the final names, the full line up for DGTL Barcelona 2016 is now complete. One of the most eye-catching additions is RØDHÅD, the Dystopian mainstay and Berghain favourite. Even more noteworthy is the fact that Rødhåd will be sharing the stage with Âme for a unique b2b session. An unexpected pairing at first thought, but less so when considering the deep essence of both artists’ sound. It goes without saying that this will be one of the biggest highlights during the festival.

Other high profile artists to finalize the line up are Ostgut royalty Ben Klock and Tama Sumo, two of Berlin techno’s calling cards. Next up is Leeds-based centerpiece of contemporary house music: Hot Since 82. No first timer for the Dutch promoter, HS82 has been one of the cornerstones of DGTL Festival’s programming since its inception. Also joining is Maeve’s co-founder Mano Le Tough as well as the comeback of Barça-resident and Hivern Discs main man John Talabot – two musical tastemakers that have both grown into household names in the international underground electronica scene.

Concluding the final line up announcement is Ben UFO. The London based young blood has been swiping dance music fans of their feet with his wildly varying musical offerings that can go anywhere from house and techno to afrobeat, classic pop edits and obscure weirdness.

Early bird tickets sold-out
DGTL Barcelona’s second edition will take place at Parc del Fòrum on the 12th & 13th of August. Due to the success of last year’s edition a fourth stage will now be added. Those interested in joining DGTL Barcelona are advised to get their tickets soon, as the early bird 2-day, Friday and Saturday tickets are already sold out, the 2nd release tickets are moving rapidly. 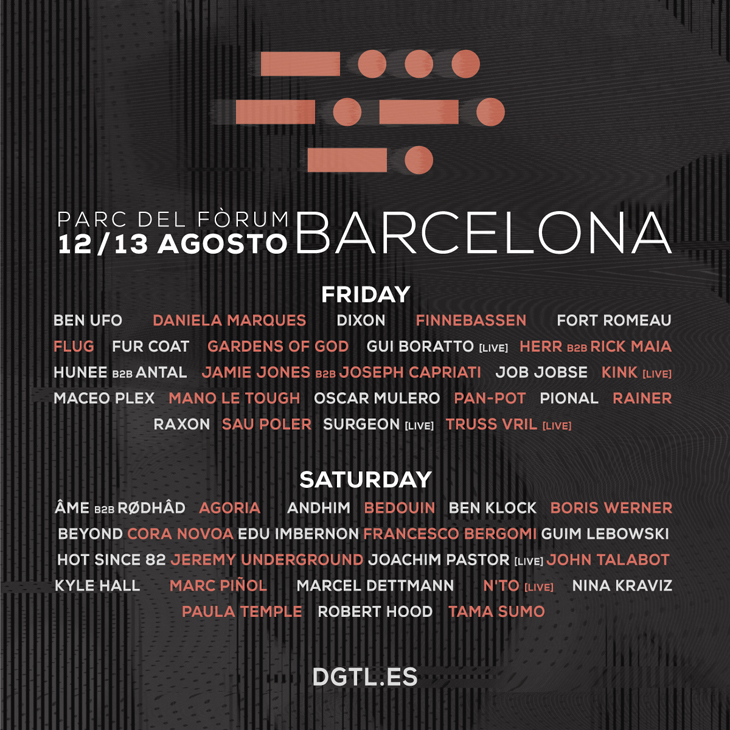