Dutch festival and event promoter DGTL just released its impressive ADE program for 2016. In the span of three consecutive nights during Amsterdam Dance Event, DGTL sets out to offer the international dance community something special in the form of co-hostings by leading partners Mosaic By Maceo, house institution Paradise and techno colossus Kompakt. Here, visitors can expect only the finest selection of artists from the various hosting parties, resulting in over 30 artists playing DGTL’s trusted indoor homebase: the Scheepsbouwloods on the NDSM-Docklands. 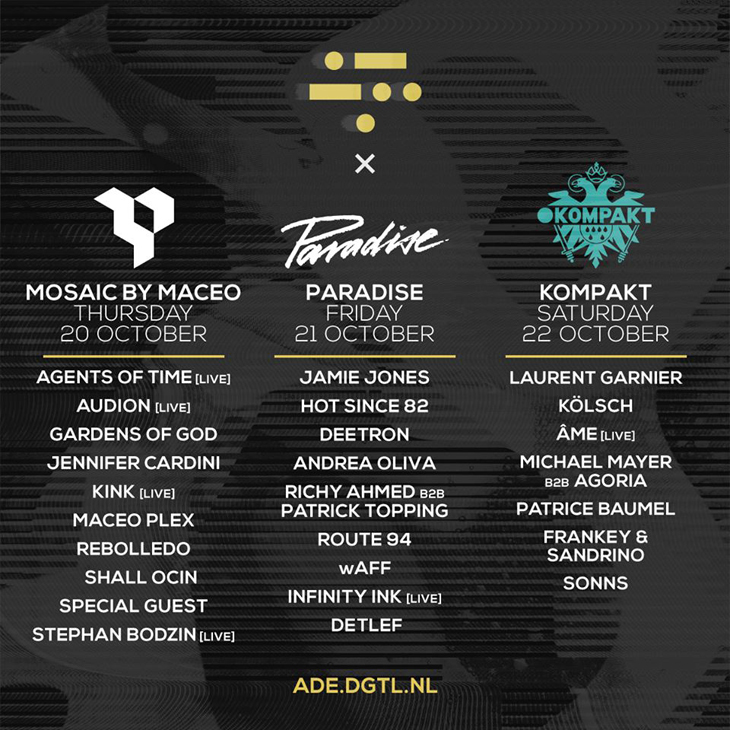 Embraced by the Amsterdam crowd for years on end, it was an easy decision to invite Maceo Plex and his new event concept Mosaic for a DGTL ADE special. Already a given on Ibiza with its weekly Tuesday nights at Pacha, Mosaic is recognised for its exploration of the best acts and sounds in electronic music. At Pacha, Mosaic has given stage to artists like Acid Pauli, Paranoid London, Red Axes, Matrixxman, Bicep, Cobblestone Jazz and many others.

Next to Maceo Plex headlining himself, the Barcelona-resident has invited an equally stirring and varied line of artists for DGTL x Mosaic. Sharing the bill with him that night are underground craftsman Audion (aka Matthew Dear), crossover techno creator Stephan Bodzin, the charismatic Jennifer Cardini, and long-time DGTL staple KiNK. Furthermore three-piece sonic adventurers Agents Of Time will be performing, along with Pachanga Boys member Rebolledo, one of Lithuania’s greatest exports Gardens Of God, and key Ellum contributor Shall Ocin. Aside from these artists, there will also be a very, very special guest featured during this night.. DGTL will disclose this act in the run-up to ADE.

Certainly many people’s favourite in DGTL’s yearly event agenda is DGTL x Paradise ADE. Jamie Jones’ successful party venture has been one of the highlights in DGTL’s ADE adventures, and not without reason, as Paradise and their affiliated artists never fail to lay down a master class in raw, no-nonsense house to all visitors.

As always, Paradise is bringing out the heavy artillery this year. Naturally the concept’s founder Jamie Jones will be on top of the list for Paradise fans, but another name can be added right next to his as UK heavyweight Hot Since 82 is taking the stage that night as well. Revellers can also get down to not one but two Swiss artists of outstanding achievement, namely Andrea Oliva and Deetron. There’s even more to come with the hard-hitting bass lines of Patrick Topping combined with Paradise’s ever-affable Richy Ahmed in a b2b session. Also billed is a special live set by early Hot Creations cornerstone Infinity Ink. Of course no Paradise line up is complete without the crew’s ace-in-the-hole: wAFF. Opening up this year is promising new kid on the block Detlef.

The final one in this event trilogy will be none other than DGTL x Kompakt. For years now the Cologne-based techno imprint has found its ADE home in the Scheepsbouwloods. For over two decades and counting, Kompakt has brought fans of underground electronica a premium offering of new and progressive sounds, and has been a pool of creativity for budding artists, some of whom are now the world’s leading artists.

For their joined night, DGTL and Kompakt are excited to announce that the legendary Laurent Garnier will act out the role of headliner this year. Another favourite among the Dutch crowd this year is Kölsch. The acclaimed Danish storytelling producer became a cornerstone of the Kompakt family through critically and commercially acknowledged albums 1977 and 1983.

Just as indispensable at a Kompakt soiree is of course a live performance from Âme, with Frank Wiedemann pulling the strings behind his setup. Kompakt co-founder and 80’s music aficionado Michael Mayer is playing a b2b set this time around with none other than the seasoned French electronic music influential Agoria. Next up is Trouw veteran and studio addict Patrice Baumel, after which the skyrocketing duo Frankey & Sandrino are up. Last but not least is Sonns, a French-born, LA-based producer with some excellent works under his belt and a more than welcome opening act for a line up that can’t be missed.

Ticket sales for all three DGTL ADE events have started today. DGTL kindly informs visitors to not wait too long with purchasing their entry to the various nights, as DGTL x Paradise and DGTL x Kompakt were sold out before October had even started. DGTL ADE will be held at the concrete jungle of the Scheepsbouwloods, located across the IJ river on the NDSM Docklands.