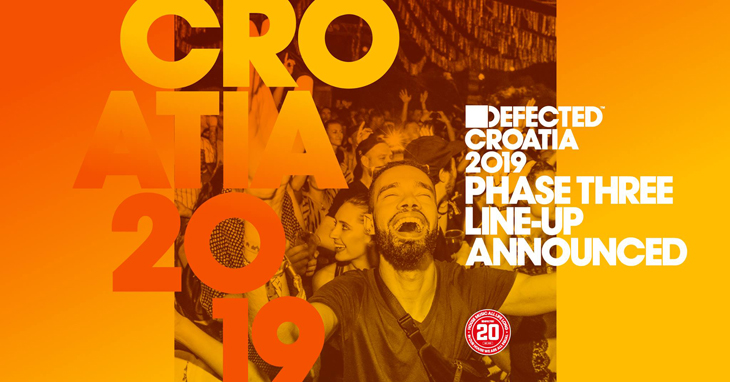 For six days and seven nights in August a growing family of Defected fans, house heads of all generations and over 80 world-class DJs and musicians gather for Defected Croatia festival. Travelling from all corners of the globe to The Garden, Tisno on the shores of the Adriatic, the festival celebrates Defected’s house music values – inclusivity, togetherness and escapism in the sunshine and under the stars.

Festival-goers are treated to headline sets from house legends and global superstar DJs. Twice-daily boat parties take the party out to sea with the best underground selectors and hottest new dance music talents. Above all, the festival’s warm family vibe means that it’s a chance to hang out with all your favourite DJ’s. There’s no VIP, just a whole lot of unity and love for house music.

A typical day at the festival kicks off with mindfulness sessions at the beach including meditation and yoga, led by wellbeing professionals and designed to instil peace and restore balance after long days and nights of dancing. The house hedonism ensues in the early afternoon across four unique stages at The Garden site, rolling well into the night and on to after-hours parties at the world famous Barbarella’s nightclub.

To add to an already stellar DJ line-up Defected Croatia decided to bring a „Iive“ element to the festival with more singers and performers on the bill than ever before. Some of the yet-to-be-announced artists include Julie McKnight, Amp Fiddler and Lorenz Rhode, plus many more. The live aspect adds a fresh take to the festival and will create memorable moments that are so important at their events.

Of course they also be adding to the DJ line-up Low Steppa, Austin Ato and OFFAIAH are just a selection of the Phase 3 artists who will be contributing to the 6 days in Tisno, which will also feature the daily Well Being program, additional production and a more extensive, diverse musical schedule.

Grammy Award winning artist, prolific remixer and often credited as the godfather of UK Garage, Todd Edwards will join the Line Up.

New Jersey raised and now residing in Los Angeles, Todd has had huge musical influence over the UK scene, and the American native quickly found success in the UK and European underground in his early career.

With his early music influenced by house heavy-weights like Todd Terry and MK, throughout the mid 90’s Todd began turning heads as he started to curate his own unique sound. With his intensive remixes and agile, complex sampling techniques that render the chopped-up effect associated with the garage sound, Todd can be credited as one of the founders of the genre. His influence on the scene is from its grassroots, with garage royalty DJ EZ naming him as a hero and inspiration.

Aside from his achievements in the UKG scene, he has also collaborated with Daft Punk on a number of projects. From providing the vocals to Billboard Club #1 ‘Face to Face’, to acting as a contributor on their ‘Random Access Memories’ album. One of the most prolific remixers in the game, he has taken on re-working everything from TLC and Craig David, from Disclosure and Infinity Ink. Each remix carefully handled to bring Todd’s signature flare to the record.

Now, with a brand-new debut release on Defected, „You’re Sorry“ is a real celebration of his trademark sound, „I had the chorus to this song in my head for over a decade. I would kinda randomly sing it to myself in the studio,“ Todd tells us. „Everyone knows Defected. Defected is synonymous with great dance music, from the newest artists to the Legends. I’m thankful to be on that spectrum,“ he says, „I’m very happy to be part of the Defected family.“

2019 will see more exciting projects with Todd on Defected, „It’s going to be an inspired year,“ he says.

Todd will be playing at our Defected Croatia in August, for a chance to see the garage legend play at The Garden Tisno you can purchase tickets here.