‚The Baron of Techno’ otherwise known as Dave Clarke is no stranger to Mysteryland. Dave is still one of the most important players in the techno scene. This year, he will host his very own stage on the former Floriade Terrain.

Responsible for many super hits including Flash from 1995 and La La Land is none other than the legendary Green Velvet. If you have witnessed what this green haired man is capable of behind the decks, then you will agree that he is an act not to be missed.

The cherry on top of all of this greatness is prominent techno heavyweight Surgeon, who has played a pivotal role in the UK techno scene. Playing alongside multi-talented Lady Starlight, this dynamic duo who performed as Lady Gaga‘s support act even won over Mother Monster with their unique chemistry and sound behind the decks.

Joining this colossal roster will be Detroit Love, a new and very special concept from Carl Craig. With Stacey Pullen by his side, they deliver only the truest techno music from the brotherhood of Detroit.

Get ready for Gary Beck to take you on a dark magical journey, as well as Holland’s extraordinary techno talent that is Joran van Pol. Birmingham techno DJ Rebekah will also be gracing the stage for Dave Clarke Presents at Mysteryland 2016.

Dave Clarke Presents will take place on Sunday August 28th at Mysteryland The Netherlands. Tickets are available now at tickets.mysteryland.nl. 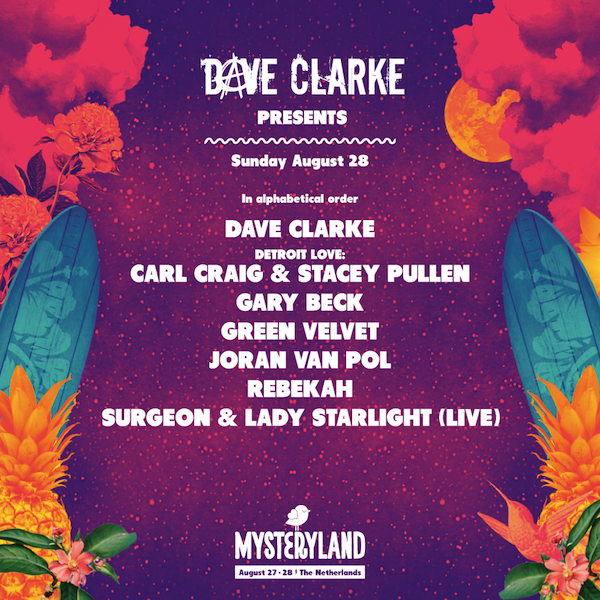 As a talented DJ and producer Dave Clarke will continue his newfound love for making music, gather air miles by the gallon and preach his vision on techno both on the decks and on the radio, whilst never forgetting the long and bumpy journey he had to undertake to get where he is now: on top of the game, respected by both fans and peers and very much relevant in today’s scene. “He might be established, but he will never be establishment”. daveclarke.com

ABOUT MYSTERYLAND
Mysteryland began in 1993 and is the longest running dance festival in the world. The festival focuses on electronic music, art, culture, talent, and sustainability. Mysteryland has been awarded by Julie’s Bicycle with a “3 Stars Green Industry Certificate” which is the highest designation for sustainability within the creative arts, music, and theater industries. The festival is rated three stars by A Greener Festival Award. This year, Mysteryland is celebrating a multi-day edition for the second time in the former Floriade Terrain in Haarlemmermeer. Extended international editions of Mysteryland take place at the foot of the Andes in Chile, and the legendary Woodstock ’69 site of Bethel Woods in New York, USA. Mysteryland is a concept of ID&T. For more information and ticket sales visit mysteryland.com.