There are three things certain in life: death, taxes and the fact that living techno legend Dave Clarke is the first one to unveil his night at Amsterdam Dance Event. After eleven splendid editions of Dave Clarke Presents at The Melkweg in Amsterdam, the Briton is back with “The Dirty Dozen’: 12 years of Dave Clarke Presents, 12 DJ’s cranking up the pace and 12 hours of bass madness. Friday, October 21st the Baron is going all out with yet another astonishing line-up, with the likes of Luke Slater & Ø [Phase], Marcel Fengler, Miss Kittin, Tommy Four Seven, Rebekah, Black Asteroid, Louisahhh and others. The pre-sale for this night will start on May 5th, 10 AM (CET) via Ticketmaster (see below) and melkweg.nl. 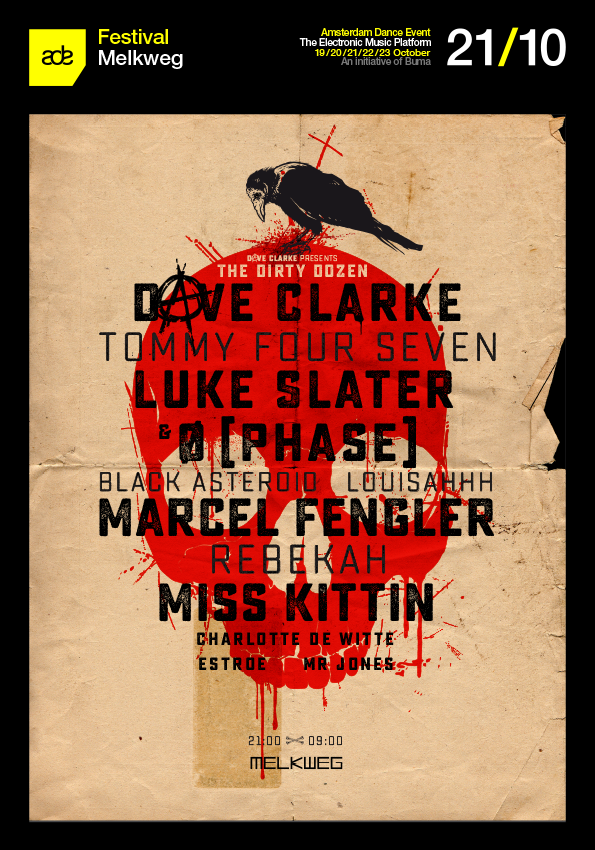 Planetary Assault Systems, The 7th Plain, Clementine; they’re all just a fraction of the many, many monikers of dj/producer Luke Slater. The Readingite is after all these years still an unstoppable force who left quite the impression with the intense ‘Hama Static’ track on Ostgun Ton’s ‘Zehn’. Slater found his soulmate last year in the form of fellow Englishman Ø [Phase]. Although they haven’t performed that often together yet, just listen to their NTS Radio mix to get a taste of all the goodness that’s about to happen in October.

A headliner in his own right: Germanic hero Marcel Fengler joins the bill. As one of Berghain’s first dj’s, Fengler is a ubiquitous crowd favorite, largely in part due to his almost kaleidoscopic form of techno, shifting constantly between its ambient and dynamic side. Being one of the more sought after dj’s, the dj/producer has seen the likes of Awakenings and Time Warp, but also Tomorrowland and Lowlands Festival.

If Clarke’s new club night ‘Whip It’ at Melkweg proved something, it would be that electro is back, more than ever. So who better to invite than the one and only Miss Kittin? Especially since buddy The Hacker left nobody standing last year, it’s up to the Kittin to crack that whip some more. Everyone who’s seen the Miss knows she’s all about the more glitchy side of techno with more than just a hint of electro. She’ll dare you to move and groove and beat you with a hit if you don’t.

You like your techno rough and just a bit faster than usual? Look no further than Briton-turned-German Tommy Four Seven, he will get those limbs pumping. The celebrated dj and producer is without a doubt one of techno’s leading men who can also fall back on an almost enviable discography. Releases on Speedy J’s Electric Deluxe, Chris Liebing’s CLR, Stroboscopic Artefacts; he’s done them all. To see Tommy live is to be part of a delightful relentless type of techno experience that will have you sweating faster than a nominee shareholder from Panama.

And we’re just getting started. The little lady of techno Rebekah will be part of the Dave Clarke Presents night as well. Though she may be little of stature, Rebekah has made a steady rise to the top of the techno industry. No small feat for the woman who’s live reputation rivals her own EP’s. Listen to the versatile works of ‘Distant’, ‘Beginnings’ and ‘Elements’ and you´ll find both sensible and fierce sides of Rebekah. And if it’s fierce you want, don’t miss out on Black Asteroid. Bryan Black (half of the enigmatic MOTOR) gives credit to his last name with a particular brand of techno meets acid, devoid of much color. Some dark themes that are no stranger to Bromance adept Louisahhh. The French dj/producer has been Brodinski’s mainstays on his label for many years, and just when things started to get a little bit quiet, she hit back with the mesmerizing ‘Shadow Work’ EP that’s filled to the brim with raw, dark beats and astute lyrics.

No Dave Clarke Presents is complete without a delegation from the Low Countries. Clarke found them: Flemish techno star Charlotte de Witte will show what the buzz is all about, Estroe is present and can call herself a label boss since the inception of Rosedale Records last year, and last but not least: Clarke’s Unsubscribe buddy Mr. Jones joins the quite impeccable line-up.

Tickets
On sale May 5th (10 AM CET). An exclusive pre-sale will run from May 3rd (10 AM) until May 5th (10 AM) for frequent buyers of the earlier Dave Clarke presents nights.
Tickets ONLINE