Motion Notion Festival – Golden, BC Canada – Embarking on its 18th year, Canada’s longest-running bass and psytrance music and arts festival, Motion Notion lifts the veil of transcendence this August 24th-28th. The event awakens the life force of the breathtaking forest surrounding historic Beaverfoot Lodge nestled in the mountains of Golden BC. Unveiling a pulsating lineup that perfectly aligns with the festival’s storied reputation for assembling some of the biggest names in electronic music alongside beloved emerging artists, Motion Notion prepares attendees for an auditory adventure of fantastical proportions.

Channeling the heartbeat of the Rocky Mountains is dubstep legend and Firepower label boss Datsik alongside psytrance powerhouse Avalon who will be on hand with plenty of otherworldly vibes. Straight out of Bristol and joining the ranks of 2017 headliners is OWSLA’s Koan Sound and fellow labelmates The M Machine, whose signature sound of melodic and upbeat underground house is sure to win the crowd’s hearts. Rounding out the bill’s top acts is Dim Mak’s own Dirtyphonics, who will deliver slamming drum & bass beats and the heaviest of basslines to the spellbinding grounds. Constructing an insanely eclectic sonic landscape to entice a vast community, Motion Notion shifts to embrace a more diverse musical lineup that features over 100 regional and international acts.

On curating a stellar lineup, Motion Notion’s director Kevin Harper says, “We’ve brought the strongest team together to combine brand new transformational experiences with one of our best lineups to date to really take this festival to new heights. The collective efforts of our MoNo family have come together to deliver a beautiful and unique environment, and this year will by far top them all.“

Returning this summer to join the headliner offering is festival alum, fan favorite and strong supporter of the festival Au5 as well as Australia’s legendary party animal Doctor Werewolf, who will be returning for his forth Motion Notion following an epic performance last year. Joining the roster of Motion Notion festival veterans are Germany’s Marten Hørger and Longwalkshortdock, who recently professed Motion Notion as his “one true [festival] love” – read more praise from Motion Notion alumnus here.

Recently dubbed “The most eclectic of the Dirtybird crew” by Dancing Astronaut, Christian Martin spins everything from house to techno to drum & bass, surprising revelers with each tantalizing drop. Martin will be joined by fellow Dirtybird, the funky Worthy. One of the original four label artists, Worthy will deliver his signature bass-driven sets alongside fellow funkmaster Fort Knox Five, a leading force in the international house breaks scene guaranteed to get the dance floor hopping.

It wouldn’t be a psytrance festival without the underground leader of the genre John 00 Flemming (known by many as J00F). Called “a national treasure of trance music” by Pete Tong BBC Radio 1, Flemming uses the “trance” like state of listeners to take them on a musical journey that transcends space and time. Beatboxing phenomenon, 80Fitz makes his worldwide festival debut on the grounds of Motion Notion this year; known for his original compositions, comedy sketches, and artist collaborations, 80Fitz is a multi-faceted talent positioned to explode onto the festival circuit.. Never fear, there will be no shortage of bass – among those quaking the festival grounds include Wakaan artist Shlump and prolific proponent of the West Coast Bass Movement, dubstep/glitch hop artist Minnesota. Full Phase 1 lineup for Motion Notion 2017 below!

Look forward to a completely reimagined landscape for Motion Notion 2017, as the new visionaries behind the festival plan to take Motion Notion to the next level for its 18th year. Aiming to further heighten the festival experience, the festival will welcome exciting expansions to the grounds, including the unveiling of a glorious beachside stage, upgraded glamping options, immersive art installations, extraordinary stage design plus more performers than ever before. The expanded performance lineup features fire dancers, contortionists, hypnotists, magicians, aerialists, comedians, yogis, and workshop luminaries. Past workshops have covered an array of topics, from Alchemical Acupressure, Quantum Physics, and Hula Hooping (beginner and advanced courses) to Dream Catcher Creation, Surya Yoga, Kundalini Yoga, Incense-Making and Mother Earth Guided Meditation (Gaia Meditation). Workshops and Phase II Lineup announcements TBA soon!

Tickets for Motion Notion 2017 are moving fast – don’t delay on planning the adventure of a lifetime! Purchase your pass here 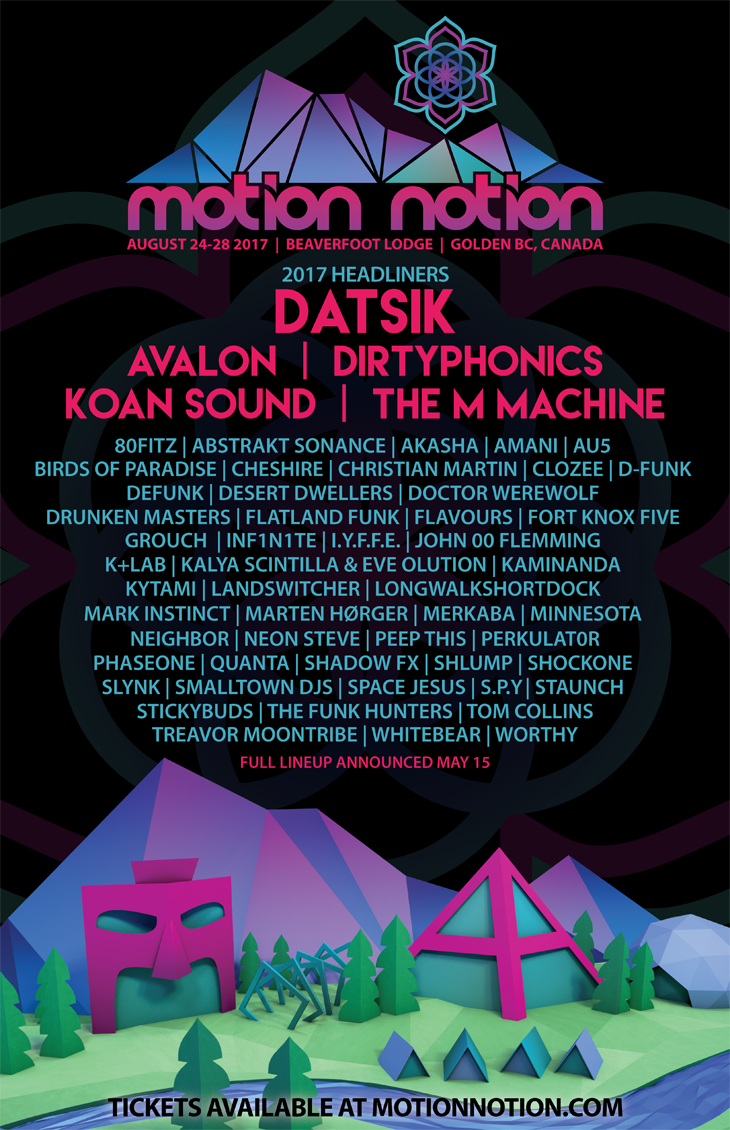