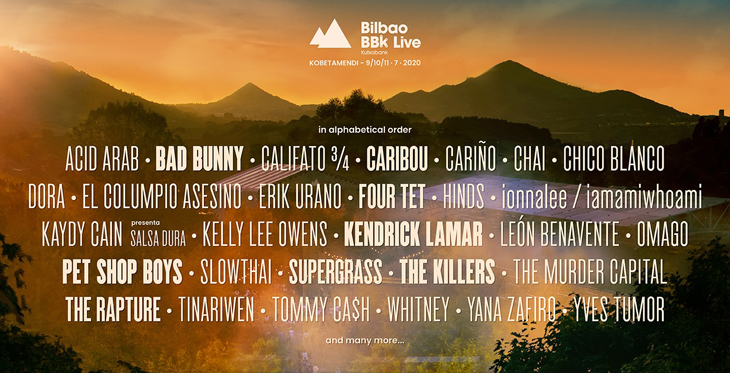 The upcoming edition of Bilbao BBK Live promises to be the most complete and accomplished festival yet, as well as one of Europe’s finest. Taking place from 9 – 11 July, in a city complete with a rich cultural, artist and gastronomical history to explore, the first-wave line-up is vast and vital with enormous diversity and many of the scene’s most definitive DJs, live acts and bands all lining up to play.

Pulitzer Prize winning Kendrick Lamar brings his heart-stopping live show to Bilbao BBK Live for the first time. The most influential rapper’s political and social commentary and albums like DAMN and To Pimp a Butterfly have ensured his place amongst the all time greats. The Killers will make a welcome return to Bilbao, all the way from their native Las Vegas to serve up one of their thrilling live shows, with a brand new record under their arm and new songs to unleash.

Fellow headliners Pet Shop Boys are set to serve up their first ever Greatest Hits show. Since signing to Parlophone Records in 1985, Neil Tennant and Chris Lowe have racked up 42 Top 30 singles in the UK including 22 Top 10 hits and four number ones making them the most successful duo in UK music history. Expect a stunning headline set of golden pop gems from one of the world’s most cherished synth bands. Bad Bunny is set to be one of the festival’s most anticipated shows, having taken home the award for Best Urban Music Album at the Latin Grammy awards earlier this month and included in TIME Magazine’s 100 Next list, which spotlights the stars who are shaping the future.

Dream pop fans will be excited by the prospect of Caribou, who is riding high with his majestic new single ‚Home‘, plus there’s music from electronic innovator Four Tet and Sweden’s music and audiovisual experimentalist ionnalee | iamamiwhoami. Intriguing and intoxicating techno with plenty of Eastern and traditional Arabic influences comes from Acid Arab, plus introspective, delicate and ambient electronics from Welsh star Kelly Lee Owens.

Newly reunited for 2020 and the 25th anniversary of their mythical ‚I Should Coco‘ are Supergrass who will be performing as part of their upcoming tour, while The Rapture will also return to the famous mountain stage once more with their anthemic indie sounds. Rap and hip-hop will be well represented by names such as Slowthai and Tommy Cash, Kaydy Cain will present Salsa Dura, and there’s plenty of room for new talents, such as Chico Blanco.

This is just the first waves of names for what already promises to be the most adventurous and essential edition yet.